In 1988, three researchers from the School of Pharmacy at Hebrew University in Jerusalem published a study investigating the effect of CBD on dogs. While the popular cannabinoid had shown efficacy in mice and rats through IV infusion, they wanted to know if oral administration would affect canine health. The dogs were given 180 mg of CBD orally. It turns out that CBD has low bioavailability when taken in this manner.

The researchers note that when ingested, CBD bioavailability is also low in humans—around 6 percent. Over three decades later and that still appears to be the case, though some studies have found bioavailability up to 15 percent. Your body (and your dog’s body) wants to store the CBD as fat. Unfortunately that’s where most of it stays, never passing the blood-brain barrier. NYU professor Esther Blessing, who researches clinical trials on CBD, puts it this way:

“There’s no evidence that doses below 300 mg of CBD have any effect in any psychiatric measure. And in fact, dose-finding studies show that the lowest clinically effective dose of CBD for reducing anxiety is 300 mg.”

Mayo Clinic Minute: Is CBD safe to use?

Mayo Clinic Minute: Is CBD safe to use?

If taken orally, the most CBD you (or your dog) would get if ingesting such a high dose would be 45 mg. (Taking it intravenously or smoking it is another story, though it is not clear how much that story changes; a 2014 study on inhalation found 25 percent bioavailability.) To put that into perspective, consider Charlotte’s Web Hemp Extract Drops 17 mg for Dogs. Retailing at $64.99, each prescribed dose contains 17 mg of CBD per mL. The dropper bottle is 30 mL, meaning it contains 510 mg of CBD. If you were to give your dog the entire bottle in one serving (which I don’t advise), they would retain roughly 30.6 mg.

None of this is to deny the potential therapeutic applications of CBD or any of the other hundred-plus cannabinoids found in cannabis. As a consumer since 1993, it’s taken decades (and a move to California) for me to stop worrying about being caught—as ridiculous as this sounds, it’s true—with a plant. I also know, anecdotally, what that plant has done for me.

The problem is that most evidence on the efficacy of THC and CBD has been anecdotal. Not all, mind you. Plenty of research has shown how effective CBD is in treating epilepsy, which is why the FDA scheduled Epidiolex for therapeutic use—the first cannabis-based medicine to be given a thumb’s up by the agency. On top of this, the cannabis research field is vibrant, growing by the month. We should support that, as cannabis has many potential usages that are desperately needed. 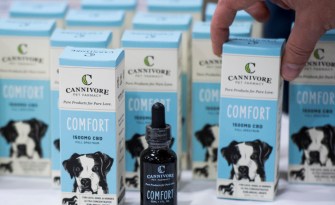 CBD oil for pets on display at the Southern Hemp Expo at the Williamson County Agricultural Exposition Park in Franklin, TN on Friday, Sept. 6, 2019.

Whether or not the current products on the market are efficacious is another story. First off, CBD is more effective when used in conjunction with THC. That makes sense given that nature doesn’t separate out lipids when constructing plants. It’s the reason why golden rice was initially such a failure: you can’t remove beta-carotene from carrots and expect it to work in a new context. Researchers had to create a second version with 23 more times beta-carotene for it to become effective at fighting childhood blindness.

Suggested doses of CBD are mostly guesswork. Sometimes those guesses prove to be pertinent. In fact—and again, this is only anecdote—when I posted my skepticism of the booming pet CBD industry on social media, a number of people reached out with examples of it working for their dogs. When I asked if it was full spectrum (including THC), all responded that it was. A few replied that they didn’t like the psychological effects (sluggishness, “out of it”), but it seemed to do the trick.

At least now the FDA appears to be taking these supplements a little more seriously. The agency sent out warning letters to 15 CBD companies for illegally selling their products. The agency also notes that CBD has not achieved GRAS (generally recognized as safe) status. Apparently a regulatory framework for addressing the quickly-growing field of cannabis products is in the works. This is important given that numerous products turn out to have questionable ingredients (or no CBD at all).

Unfortunately, our pets cannot speak to us. Most observations of the efficacy of CBD will continue to be anecdotal, and we well know that the placebo effect shapes how we view reality. That this could extend to our furry friends should not be surprising; nor should the fact that companies are exploiting this questionable science.

In five years, or two, another magic bullet will be all the rage. Right now it’s CBD and we’re paying a premium for dropper bottles filled with questions.

Why there are reasons to be optimistic about coral reefs

Let’s not kid ourselves: Coral reefs are in serious danger. But numerous ambitious projects are underway with the goal of keeping these ecosystems alive.