When you think about it, our skin is kind of weird. It not only protects what lies underneath it, but emits secretions to cool, strengthen, and odorize itself. Other creatures have skin that can change color or secrete mucus to reduce friction with the water.

The ability for parts of our bodies to interact with the environment and respond to changes is something that “smart” materials seek to emulate. To that end, a team of scientists at the Eindhoven University of Technology has created an artificial skin that can secrete liquids on demand. 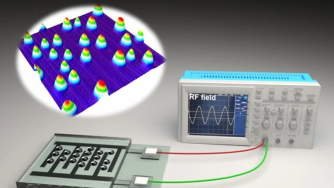 The skin, made of liquid crystal molecules, is solid and features many very tiny pores. These pores store a liquid of the scientists’ choosing.

Liquid crystal molecules, which are also used to make LCD television screens, react to environmental stimuli. Of importance in this case is that they can be made to respond and move when bombarded with radio waves. When the radio waves are produced, the particles that make up the membrane start to move and the liquid comes out of the pores.

Lead author Danqing Liu described the mechanism to Eindhoven News, “When the radio waves are turned on, the liquid crystal molecules move direction and therefore wring the liquid out of the pores. The coating even sweats more as the radio signal becomes stronger.”

When the waves are stopped, the liquid can be reabsorbed. This allows for a measure of control as to how wet or dry the material becomes.

Liu explains why radio was used as a trigger rather than electricity: “The high frequency we use was invented for the electrical car. It cannot penetrate the body, and therefore it is completely safe to touch. It is already a common frequency in the health care industry, for example in electrical therapies.” If this skin is ever used to deliver medicine directly to a wound, being safe to the touch is a big deal.

The Future of Medicine Is Here. Now Let’s Start Using It.

The authors of the study speculate that possible applications include “robotic handling of reactions, medicine release, and transfer of chemicals” and the “alteration of tribological properties of surfaces or removal of unwanted species.”

Imagine it. One day you might wear a robotic bandage that secretes medicine to your wounds automatically, scientists might use tiny robots to deliver chemicals to hard to reach areas to begin reactions, and dangerous chemical spills may be neutralized by solutions brought in and emitted by machines. Further study areas include trying to make this work with sunlight and determining if a second agent can be reabsorbed.

If these obstacles can be cleared, the number of applications will go even higher.

Don’t count on getting any of this tomorrow, though. Liu warns that the next steps will likely take years to accomplish. Oh well, I guess my plan to become a cyborg might have to wait a little while longer.

The spray uses snippets of DNA to gum up virus replication.
Up Next
Health

The takeaway: limit sugar and dairy if you want better skin.