Chinese sage-king Shennong discovered tea when the leaves of a Camellia sinensis shrub drifted into his cauldron of boiling water. An agriculturalist and medicinal pioneer, Shennong decided to test the fortuitous brew and relished its uplifting properties. In other botanical tests, Shennong would be poisoned more than 70 times. Each time, he cured himself with tea.

That’s one version of the story anyway.

While Shennong is a mythical figure, tea does originate from China, where it was cultivated nearly 5,000 years ago as a vegetable. Over time it made the shift from food staple to a beverage that closely resembles what we call matcha. Today, only water is a more widely consumed beverage.

Another debunked aspect of the legend is tea’s elixir-like effects. Full disclosure: Tea is not a catch-all antidote. It does, however, come with a bevy of nutrients and chemical byproducts that make people feel good when drinking it. Add to that tea’s pleasantly earthy taste and lush aromatics, and you can see why tea’s popularity spread across time and culture.

Our ancestors may not have called tea a biohack, but they knew it could improve your day to make you more attentive, more motivated, and just plain feel better. 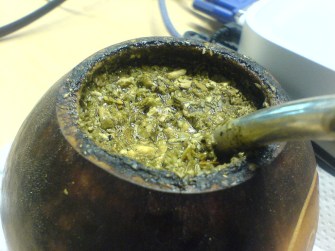 Yerba mate tea served in a gourd, the traditional way to drink the beverage in South America.

Tea, the other morning pick-me-up

Americans quaff a lot of coffee. A lot. And we don’t even crack the top ten. While coffee comes with its own health benefits—a subject for another discussion—most people enjoy a morning cup as warm pick-me-up.

Coffee has its drawbacks though. An 8 oz. cup contains anywhere from 100–165 mg of caffeine. This means you max out your daily caffeine recommended intake in two to four cups—not great if you desire several caffeine fixes throughout your day. It’s also rather acidic, rating below a 7 on the pH scale. While not as bad as soda‘s, coffee’s acidity can upset people’s stomachs and eats away at tooth enamel.

For people looking to move away from coffee, or simply drink less, tea offers a viable, caffeine-fueled alternative. One potential substitute is yerba mate.

Yes, we’re cheating a bit here. Yerba mate isn’t technically tea, because it doesn’t come from the Camellia sinensis plant. It is made from the dried leaves of Ilex paraguariensis, a South American holly tree. It is a tea beverage, though, as the English word has expanded to include most any drink that infuses leaves, fruits, and flowers into hot water.

Mate contains more caffeine than either green or black tea but sports less than coffee (85 mg/8 oz. cup). Its strong, bitter flavor offers that robustness that people enjoy about coffee but with far less acidity. One study found that yerba mate’s pH values stayed in the neutral range (6.75–7.89), so it plays well with teeth.

Toss in mate’s vitamins, minerals, and amino acids, and the drink may have health benefit potentials akin to traditional tea (though research in this area has not been conclusive).

If mate isn’t to your taste, consider matcha tea instead. It has more caffeine than steeped green tea but less than coffee (70 mg per 8 oz. cup). Matcha is also richly aromatic with an umami flavor that makes for a hearty morning sip. 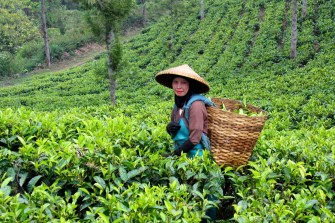 A woman harvests tea at a Malabar tea plantation.

Caffeine fiends may scoff at replacing their morning buzz with tea’s more moderate energy boost. Yet, tea’s lower caffeine and lack of sugar make it the superior way to power through the afternoon slump.

“If you look at the supermarkets today, it really feels like there’s a caffeine arms race. More is better is the ideology, but that’s not the case when it comes to caffeine. It’s about the right amount and the right type,” Grant Taylor Williams, co-founder of Tempo, said during an interview.

Tempo is a tea company that designs its drinks to include a “micro-dose” of natural caffeine. After researching the scientific literature, Grant and his co-founders decided that the best tool for overcoming the 2 p.m. doldrums was a microdose of caffeine (45 mg).

Of particular inspiration to them was a study published in SLEEP. This double-blind, placebo-control study found that low doses of caffeine throughout the day increased performance under conditions of extended wakefulness.

“What we learned, beyond that research paper and some of the other stuff we’re read, is that it’s not just the caffeine component and not just the fact that it’s natural. It’s all these other pieces of the puzzle that fit together to really create a healthy drink for you,” Williams said.

Dr. Austin Gallagher, biologist and Tempo co-founder, pointed out that the flavanols and polyphenols found in green and black tea have been shown to aid mood and lower stress. Tea leaves also contain the amino acid L-theanine, he noted. L-theanine modulates the absorption of caffeine, preventing that quick spike of energy to stretch out the boost more evenly. It also stimulates feel-good neurotransmitters like GABA and serotonin, which work to improve mood, alertness, and sleep.

Tea, like coffee, is a diuretic so it increases the production and passing of urine. However, according to Ali Webster, PhD and associate director of nutrition communications at International Food Information Council Foundation, tea is overall hydrating.

“The hydrating aspects of tea and coffee outweigh the minor increase in fluid offloading, so these drinks have a net positive effect on hydration,” she told Business Insider.

This combination of a lack of sugar, natural caffeine, and hydration makes tea an excellent way to power through to 5 o’clock and increase your daily productivity.

Gallagher added: “Today, everybody’s looking to optimize their performance. What’s the trendy new good, drink, pill? What is it that I can have every day that is going to make me faster, give me more time and make me better at my job? What we found at Tempo is the solution to that doesn’t need to be complex. [Tea] really is a biohack [and] it’s been underneath our noses for thousands of years.” 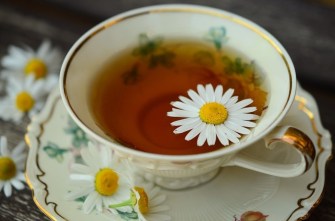 In the evening, your goal should be to relax for a restful night’s sleep. What you eat and drink before bedtime has a significant impact on whether your brain works with or against you. Alcohol has long been considered the standard nightcap, but research has shown that booze leeches restfulness and even our dreams. Chamomile tea, on the other hand, can offer a much more salutary evening.

Like yerba mate, chamomile isn’t a tea in the word’s original sense. It’s derived from the dried petals of a European flower—hence its distinctive floral aroma and sweet taste. Like tea, though, chamomile has a long and rich history. For centuries Europeans have utilized it as a tonic and antiseptic for a range of ailments.

A 2010 review looked at the research on chamomile’s folk uses. The researchers postulated that chamomile’s sedative properties may result from the flavonoid apigenin, which can bind to receptors in the brain. But despite promise in preclinical models, they decided further research was needed.

Since then, other studies have found a stronger link between chamomile and good night’s rest. A 2017 study found that chamomile improves sleep quality in the elderly, a group prevalent with sleep insomnia. And a 2016 study saw a similar effect in postpartum women.

While more conclusive research is needed, if nothing else, chamomile’s lack of caffeine and soothing flavor offer a pleasant way to simply chill alongside a good book. 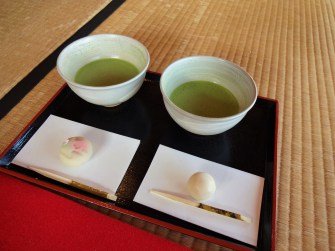 Tea tray with two cups of matcha tea served during a tea ceremony in Japan.

Tea may not cure poisons, but scientific evidence suggests it bestows several long-term health benefits. Many observational studies have found a correlation between drinking tea and a reduced risk of various types of cancer. Tea’s flavonoids have been linked to anti-diabetic and anti-inflammatory effects. And a meta-analysis cited increasing support that tea protects against cardiovascular disease.

“Tea consumption, especially green tea, may not be the magic bullet, but it can be incorporated in an overall healthy diet with whole grains, fish, fruits and vegetables, and less red and processed meat,” wrote Qi Sun, assistant professor in the Department of Nutrition at the Harvard School of Public Health. Though, he adds, sugar in your tea will likely negate these benefits.

We still have much to learn about this ancient tonic, but scientific inquiry has rediscovered what the Chinese found out thousands of years ago. Tea can help you navigate your day more efficiently. If tea proves to have even more salubrious effects, then bonus!

Psychologists are finding that moral code violations can leave an enduring mark — and may require new types of therapy.
Strange Maps

A 19th-century surveying mistake kept lumberjacks away from what is now Minnesota’s largest patch of old-growth trees.
The Present

“Downward counterfactual thinking” — that is, imagining how things could be worse — is a quick and easy way to boost your well-being and gratitude.
Up Next
Starts With A Bang

Why Is Uranus The Only Planet Without Interesting Features On It?

All the other planets have craters, icecaps, clouds, or a rich, banded structure. But not Uranus.The eight major planets of the Solar System all possess their own unique features. The rocky […]