Life flourishes with diversity, as diversity gives nature something to choose from, providing flexibility to adapt to change. Variation between humans seems endless, both in appearance and in behavior. Variation between humans is largely due to our flexible nature that allows us to adapt to a wide variety of potential life trajectories, and partly due to set dimensions of variation in our biological make-up carefully molded by the hands of time.

Four billion years of natural selection crafted the refined machinery we all share — encoded in most of our DNA — as well as carefully selected room for variation — encoded in a minority of DNA differences. If the 3.2 billion nucleotides in our DNA would fit into a 300-page book, the differences between two random people would barely add up to two pages. Many decades of research in twins and family members suggest that considerable portions of differences in human behavior are associated with some of the tiny differences within those two pages.

If the 3.2 billion nucleotides in our DNA would fit into a 300-page book, the differences between two random people would barely add up to two pages.

It is hard to uncover the evolutionary stories behind these differences, but it would probably help to first find out how these genetic differences exactly give rise to the diversity in our behavioral repertoire. Recent advances in genetics research allow us to link specific DNA nucleotides on those two pages to complex behavioral outcomes. Studies that link genetic variation on a molecular level with complex traits are called genome-wide association studies (GWAS). In a GWAS, millions of single DNA nucleotides are tested one by one in order to quantify their relationship with the most complex of human traits, including behavior.

Professor Karin Verweij and I recently published an article in Nature Human Behavior, in which we review what we have learned so far from GWAS on human behavior and what steps we need to take to learn more. Here, I will summarize some highlights from our article and reflect on their societal relevance.

Many genes with tiny effects 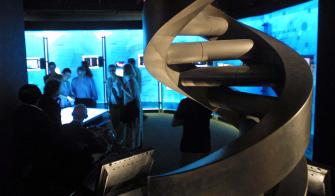 The tiny effects of individual genetic variants are hard to estimate, unless unusually large groups are studied. In a typical GWAS, we study millions of DNA variants from hundreds of thousands of individuals. The sum of these small effects can be used to predict people’s genetic risk for all kinds of outcomes. The predictive power of DNA is increasing as our studies grow, but we still understand very little about the nature of these predictions.

There are probably no genes that directly influence complex behavioral outcomes. Instead, the many small genetic effects travel through many cascades of mostly unknown biological processes that react to and influence the physical and social environments that people live in.

Before we let DNA prediction reach the clinic or other uses with unpredictable ramifications, such as embryo selection or mate selection, it is important that we first invest in better understanding the nature of the relationship between genetic differences and behavioral outcomes.

For educational attainment, for example, we recently split up the part of the genetic effects associated with IQ, which makes up 43 percent of genetic effects on educational attainment, and a “non-IQ” part, making up the remaining 57 percent. We are not sure yet what that remaining 57 percent exactly entails, but we do see that those genes increase the risk for schizophrenia and bipolar disorder. This could be because people with a higher genetic risk for schizophrenia or bipolar disorder tend to be more creative and more open to new experiences.

These shared genetic effects teach us a lot about the genetic architecture of human behavior and also make us realize that it is difficult to select for one trait without also influencing many others. This is a strong argument against using DNA prediction to influence your offspring’s DNA through embryo selection, a service that, unfortunately, some companies have already started to offer.

These opposite reactions to the same genetic signal might have to do with income being more closely associated in people’s minds with social inequalities. Trying to explain social inequalities in terms of something that people are born with may instill the fear that science is being misused to justify the position of marginalized groups. Instead, these molecular genetic effects are helping to elucidate an inherent unfairness in the way we organize our societies.

A closer look at these genetic effects shows that they contain substantial amounts of environmental influences. Our initial studies had trouble separating the two because they are highly correlated. When your genes predispose you to a higher education, that means that your parents also carry those genes and are thus more likely to also have a higher education, giving them better resources (money) to nurture you with a better environment. If you are born with genes that make it easier for you to learn, it will also increase the chances that you will move to a richer neighborhood with healthier living circumstances. These “double advantages” and “double disadvantages” make us mistake the impact of systematic social disadvantages for genetic effects, inflating heritability estimates.

These gene-environment correlations were recently detected studying DNA from people that were exclusively of white European origin. Systematic differences in environmental influences are likely much worse between different ethnic groups, casting more doubts on white supremacists’ claims who love to use these inflated heritability estimates to support their genetic explanations for socio-economic group differences.

After two decades of reading out human genomes, we are still only scratching their surface. We are just starting to dissect only a fraction of the total heritability that we are currently able to capture with molecular genetic data. Large parts of humanity are still underrepresented in our measurements, which makes it difficult to make more general claims. We outline in more detail in our Nature Human Behavior paper which steps we need to take in our methods and data collection strategies to better understand the differences in our DNA.

The sacrifices of early astronauts paved the way for Apollo’s successes, and so much more.In all of history, only 24 humans have ever escaped Earth’s gravity.The very first launch from NASA’s […]