It doesn’t take a surgeon to note the pretty major discrepancy between how we draw our heats and our anatomical hearts. The thing in our chests that pumps blood throughout our bodies resembles a lopsided fist more than it does the smooth arcs of the heart symbol. Which begs the question: Why and when did we ever start using that symbol in the first place?

Cyrene: The heart of silphium trade

If we look far back enough, we can trace the symbol’s use to ancient Rome. However, it wasn’t just a guess at what the heart might look like. The first recorded autopsy occurred in Alexandria in 300 BCE, and the Egyptians were removing corpses’ organs for mummification thousands of years before even that — so ancient Romans were well familiar with the shape of the anatomical heart. 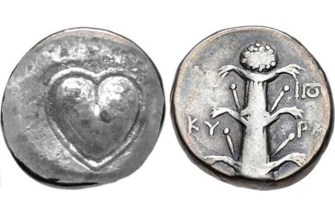 Silphium grew abundantly along the coast near Cyrene. The Romans considered the plant to be worth its weight in silver, and for good reason. Silphium was believed to be a medical panacea. Describing the medicine derived from silphium (inexplicably called “laser”), Pliny the Elder wrote,

“Laser, a juice which distills from silphium, as we have already stated, and reckoned among the most precious gifts presented to us by Nature, is made use of in numerous medicinal preparations. Employed by itself, it warms and revives persons benumbed with cold, and, taken in drink, it alleviates affections of the sinews. It is given to females in wine, and is used with soft wool as a pessary to promote the menstrual discharge. Mixed with wax, it extracts corns on the feet, after they have been first loosened with the knife: a piece of it, the size of a chick-pea, melted in water, acts as a diuretic.”

Pliny and others attributed many more medical properties to silphium, but one property in particular made the shape of its seed last throughout history. Silphium seeds were both contraceptives and could be used to induce abortions.

The ancient Romans didn’t have the benefit of latex condoms. Instead, they used the bladders or intestines of sheep and goats. But in addition to being about as far from sexy as something could be, their primary purpose was to prevent venereal disease; not to prevent pregnancy. For that, they used silphium.

Aristotle believed that the heart was the seat of the soul, and therefore the origin of all thought and feeling, including love. So, one theory goes, through its association with lovemaking, the distinctive shape of the silphium seed became associated with love, and through its association with love, the silphium seed became associated with the heart.

That’s why today we give each other silphium-shaped candies on Valentine’s day and not candies shaped like lopsided fists. But what we don’t do today is take silphium to prevent pregnancy. Although we have far better contraceptives today, we couldn’t take silphium even if we wanted to; it’s extinct.

As far as we know, silphium only grew along a narrow stretch of coast in North Africa. A few different factors may have gone into its extinction in the 4th century. Pliny the Elder wrote that farmers would feed their flocks on silphium, possibly to improve the quality of the meat. The Romans enthusiasm for the plant’s properties likely led to overharvesting, and, according to Theophrastus (known as the father of botany), the plant could not be cultivated and only grew in the wild. Over time, Northern Africa became increasingly more desert than fertile land, and the plant was lost. However, the shape of its seed lives on.

Relativity Wasn’t Einstein’s Miracle; It Was Waiting In Plain Sight For 71 Years

Faraday’s law of induction was set forth in 1834, and was the experiment that led Einstein to discover relativity.When we think about Einstein and the theory of relativity, all sorts […]