The Illuminati has become a stand-in myth for every conspiratorial crackpots’ idea of some omnipresent cabal pulling the strings on world affairs. Depending on who you ask, sometimes they’re responsible for some two-bit celebrity’s rise to fame, orchestrators of catastrophic events, or planting some head of state to power.

Whatever blame or malice is placed on the Illuminati, most rationally-minded people quickly see through this and understand it’s complete nonsense.

On the subject of conspiracy in general, famed comic book writer Alan Moore, summed it up quite nicely when he said:

You’ve got to hand it to conspiracy theorists, if there is one thing they’ve given us — it’s that their kooky ideas make for some great fiction. This was where counterculture legend Robert Anton Wilson, inspired by the text of Principia Discordia, would begin drafting a story that would give way to the the Illuminatus! trilogy.

In writing the books, he created the conspiracy of the Illuminati that we have with us today.

The truth is more frightening, nobody is in control. The world is rudderless.

Origins of the real Illuminati

Sometimes real conspiracies exist. Warring factions vye for power and cut covert deals. Many times, organizations will arise in secret to overthrow supposed unjust governments or other ruling powers. Take conspiracy at face value and you see that every great country in this world was once just a little meandering conspiracy in a few men’s minds. The original illuminati was one such failed enterprise.

In late 18th century Bavaria, scholar and university professor Adam Weishaupt formed a secret group that sought to follow in line with Enlightenment principles in lieu of the hard-line Jesuit order at the time. Ironically, the original Illuminati wanted to create a society led by science and reason as opposed to an unexamined religious mentality.

The group started in 1776, where they recruited a number of intelligent thinkers into the group. According to modern historian Reinhard Markner:

“The Illuminati managed to recruit quite a large number of influential men — princes and their councillors, high-ranking bureaucrats, university professors and other educators, writers and intellectuals.”

The original order ceased to exist in 1788 and never really caught on. Markner explains that the group was pretty unremarkable for its time as there was numerous secret organizations popping up during that era.

It wasn’t until some two hundred years later that Robert Anton WIlson would resurrect this run-of-the-mill society and turn it into the conspiracy we know today.

The writer once remarked, 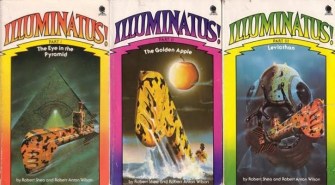 Invention of the modern Illuminati conspiracy

Wilson and Shea crafted the text with the intent to bring some good old-fashioned disinformation and chaos back into the culture — just for the fun of it. They decided this would be best done by telling stories about the Illuminati.

During this time, Wilson worked as a writer and editor for Playboy. Allegedly, Wilson, along with a couple of other writers, began writing fake letters to the magazine to start talking about the elite super-secretive organization called the Illuminati. Later, they’d send more letters in contradicting what they’d just written and stirring even more intrigue.

Eventually, this culminated in the Illuminatus! trilogy, for those in the know it was a fantastic cult classic of top tier satire. Weaving nonsense from the Kennedy assassination to the deeper and more insidious nature of the Illuminati. For others, who believe this tripe… not so much. Indeed, according to Wilson:

You simply cannot invent any conspiracy theory so ridiculous and obviously satirical that some people somewhere don’t already believe it.

Now no amount of sermonizing or factual evidence will help the conspiratorial fanatic. Conspiracy leads to anti-scientific thinking and a populace without any self-agency. All we can do is crack open a book (why not the Illuminatus! trilogy?) and have ourselves a good laugh on the absurd origins of the Illuminati conspiracy.

“My dad asked me if I had been to tutoring and I lied… Then he showed me the tablet.”
The Future

A vertical map might better represent a world dominated by China and determined by shipping routes across the iceless Arctic.
Up Next
Communication

Why 85% of the business world thinks differently than you do

Business, on every level, is becoming more multi-cultural. Whether it’s embracing diversity internally, expanding to multiple sites around the world, or entering distant markets such as China, never has it […]