When I bought a copy of the most famous modern book on the philosophy of science, I expected to hate it. The study of science as a sociological activity is fraught with misunderstanding, and I was prepared to excoriate its arguments. I was wrong.

The Structure of Scientific Revolutions (TSOSR) was published by Thomas Kuhn in 1962. It reads like an academic book from that very different time. It attempts a neutral, removed, logical analysis of its subject; it is not a polemic. The writing is dry but the thinking is extremely sharp. Its central theme is that the way we think of the progress of science is a fairy tale.

Science doesn’t work the way you think it does

Scientists and laymen alike are taught science as a gradual accumulation of new facts, stacked like rocks into a giant mountain that is our current understanding. Gradual but steady and linear progress is the textbook story. Science is Newton standing on the shoulders of other Newtons, all the way down.

TSOSR smashes this idea. Science can only be constructively conducted within the framework of a paradigm. You and I both want to roll our eyes at this hideous cliché. Sixty years ago, it was a fresh idea. The idea was so good that it became a cliché.

Kuhn demonstrates that scientific research cannot create and sustain the organized collective pursuit of understanding without the structure and framework provided by a dominant model within the field: the paradigm. Research fields are born in chaos, with no guiding set of rules. Before that dominant model takes over and crushes competing models, each researcher spends their time fighting for and justifying their entire concept of the structure of the field, not just its discovery. An established paradigm provides context and support, justifies its assumptions, and binds work together to unify the field. “Crackpot” ideas that do not conform to the model are subverted and crushed.

Creating a model for electricity was impossible while some researchers built their theories upon the flow of one charge and the excess or dearth of it, while others explained observations as the flows of both negative and positive charges. Others still built a theory — entirely wrong on its literal merit, though conceptually similar to modern field theory — of “effluvium.” Ideas such as effluvium and luminiferous aether were so crushed by the successful paradigms of Benjamin Franklin and Albert Einstein that, today, we cannot even conceive of how they could be correct.

How to overturn a paradigm

A paradigm reigns until a critical mass of irresolvable anomalies piles up. Incremental progress does not solve the problem. In these times, rare creative scientific geniuses reimagine the entire structure of the field. A battle ensues, as the new model displaces and throws out the old (as well as the experts of the old). This new paradigm succeeds because it redefines how problems are approached and solves problems that could not be addressed by the mechanisms of the old.

For decades, gifted experimentalists observed that atoms only absorb and emit certain quantities of energy. The explanations grew convoluted, as the old paradigm predicted that atoms should collapse and the universe die in a storm of UV rays. Einstein at the peak of his powers proposed a change in thinking. As a result, the entire field of particle physics exploded and then coalesced around quantum mechanics, which has driven its evolution for the past century.

Most scientists are cogs in a machine, not revolutionaries 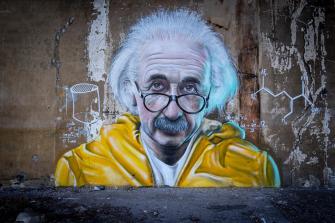 TSOSR contains an even more grim reality. While the Einsteins of the world smash existing paradigm models and revolutionize entire fields, most researchers are performing an important but different function. There are many, many phenomena and details that must be addressed, measured, and understood within the logic and rules of the dominant model. Decades of work follow to iron out all of the details of the new theory and how known observations fit within it. Most research is of this type: not reimagining the universe but combing its entire breadth for problems and phenomena to address inside the framework of the new paradigm. For some scientists, this is a depressing realization.

Astronomers working under the geocentric Ptolemiac framework calculated planetary orbits with a series of increasingly complex epicycles. These are motions in which bodies orbit one another using intricate patterns of circles about circles. This became increasingly complex and difficult. So, Kepler* exploded the field by proposing that all orbits are conic sections. Astronomers then inherited a vast new workload of discovering bodies and calculating orbits based not on epicycles but on ellipses, parabolas, and hyperbolas.

None of this superb theorizing would be convincing if it did not match up with the experience of a scientific researcher. Despite its academic tone, the observations and explanations offered by Kuhn ring true to someone who conducts experiments in the trenches for a living. Kuhn himself studied science as a student; perhaps this explains how penetratingly correct his observations are.

There is much more superb observation to be found in TSOSR. It’s dry, but it’s honest, and the work endures despite its bitter pills. For some, it may be dispiriting; for others, its clear truth in the light of observations holds up, like the best scientific research. At least until the next (sigh) paradigm shift.

*Update: A previous version of this article credited conic sections to Copernicus, but it was Kepler who eliminated epicycles. Our apologies.

Tags
booksphilosophyscience
In this article
booksphilosophyscience
Related
Thinking
How science changes the way we think, according to 10 leading scientists
A group of prominent scientists shares how research has changed them.
The Present
“Time inequality” is the world’s real problem, not income inequality
Inequality should be measured in terms of the time it takes for us to earn the money to buy the things we need. And everyone is getting wealthier.
High Culture
Attacking a priceless work of art doesn’t make you an iconoclast
Climate activists’ brand of iconoclasm is far removed from the Beeldenstorm that swept medieval Europe.
Thinking
The 4 types of enemies (and how to defeat them)
Buddhism has rules for slaying your enemies. But the real surprise is finding out who your enemies actually are.
Thinking
Not believing is the second biggest “belief” in the U.S.
There are different types of atheism and atheists. In general, they can be classified as the non-religious, the non-believers, and agnostics.
Up Next
Life
Is saving the panda a waste of time and money?
It is difficult to save a species that does not seem to care about saving itself.