In a world gone mad, what can the few sane people left do? What can someone say when there are no words that seem up to the job? How can anyone hope to express ideas so terrible when doing so will only reduce those ideas?

These are some of the things that inspired the Dada movement, and in its absurd, surreal, and chaotic nonsense, we find the voice of the voiceless.

The origin of Dadaism

Dada was a response to the madness of World War I. Reasonable, intelligent, and sensitive people looked at the blood and mud graveyards of the trenches and wondered how any meaning or goodness could ever be found again. How can someone make sense of a world where millions of young, happy, hopeful men were scythed down in a spray of bullets? How could life go back to normal when returning soldiers, blinded and disfigured from gas, lay homeless in the streets? Out of this awful revulsion, there came one bitter voice, and it said: “Everything is nonsense.”

Dada is the art of the nihilist. It smashes accepted wisdom, challenges norms and values, and offends, upsets, and provokes us to re-examine everything.

And so, the Dada movement expressed itself in absurdity. Tzara, the closest you get to a Dadaist philosopher, put it like this: “Like everything in life, Dada is useless. Dada is without pretension, as life should be.” Dada rejects all systems, all philosophy, all definite answers, and all truth. It is the living embrace of contradictions and nonsense. It seeks “to confuse and upset people, to shake and jolt”. It aims to shout down the “shamefaced sex of comfortable compromise and good manners,” when actually “everything happens in a completely idiotic way.”

In short, Dada is a response to the world when all the usual methods have broken down. It’s the recognition that dinner party conversations, Hollywood blockbusters, and Silicon Valley are not how life actually is. This is a false reality and order, like some kind of veneer.

The Dada response to life is to embrace the personal and passionate madness of it all, where “the intensity of a personality is transposed directly, clearly into the work.” It’s to recognize the unique position of an artist, who can convey ideas and feelings in a way that goes beyond normal understanding. Art goes straight to the soul, but the intensity of it all can be hard to “enjoy” in the strictest sense.

Where is this Dada?

For instance, Dada is seen in the poems of Hugo Ball who wrote in meaningless foreign-sounding words. It’s in Hausmann, who wrote works in disconnected phonemes. It’s found in Duchamp’s iconoclastic “Fountain” that sought to question what art or an artist really meant. It’s in Hans Richter’s short film “Ghost before Breakfast,” which has an incoherent montage of images, loosely connected by the theme of inanimate objects in revolt. And, it’s in Kurt Schwitters’ “psychological collages” which present fragments of objects, juxtaposed together. 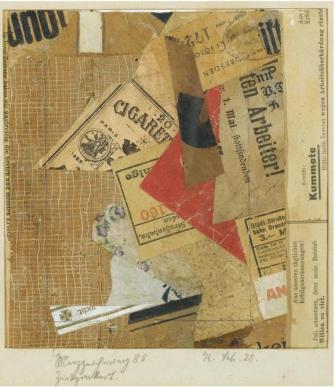 Dada is intended to shock. It’s an artistic jolt asking, or demanding, that the viewers reorient themselves in some way. It is designed to make us feel uncomfortable and does not make for easy appreciation. It’s only when we’re thrown so drastically outside of our comfort zone in this way that Dada asks us to question how things are. It shakes us out of a conformist stupor to look afresh at things.

The paradox of Dadaism

Of course, like all avant-garde art, Dada needs to address one major problem: how do you stay so provocative, so radical, and so anti-establishment when you also seek success? How can maverick rebels stay so as they get a mortgage and want a good school for their kids? The problem is that young, inventive, and idealistic artists are inevitably sucked into the world of profit and commodity.

As Grayson Perry, a British modern artist, wrote: “What starts as a creative revolt soon becomes co-opted as the latest way to make money,” and what was once fresh and challenging “falls away to reveal a predatory capitalist robot.” With Dada, how long can someone actually live in a world of nonsense and nihilistic absurdity?

Dada is the art of the nihilist. It smashes accepted wisdom, challenges norms and values, and offends, upsets, and provokes us to re-examine everything. It’s an absurd art form that reflects the reality it perceives — that life is nothing more than a dissonant patchwork of egos floating in an abyss of nothing.

A new study says the reason cave paintings are in such remote caverns was the artists’ search for transcendence.
High Culture

A conservator from the Rijksmuseum explains how they went about investigating whether the painting is a genuine Rembrandt.
Up Next
Health

Study: Tripping might not be required for psychedelic therapy