We are all hallucinating. No one dropped LSD into the water supply—they didn’t have to. “Reality,” an ambiguous term coined to denote a common set of shared facts, is a construction we’ve created in an attempt to comfort us that a master plan exists. It does not.

In his latest book, “The Science of Storytelling,” journalist and novelist Will Storr opens with a simple yet disconcerting message: “Humans might be in unique possession of the knowledge that our existence is essentially meaningless, but we carry on as if in ignorance of it.”

This is why we’re all hallucinating. We’re not living reality as much as constructing one based on personal history and environment. Over 7 billion human animals walking around, telling ourselves stories about ourselves, using them as emotional shields to guard against the ravages of an indifferent universe.

That’s how powerful stories are.

Pouring over his notes from years of teaching creative writing, as well as research from his previous works (including “The Unpersuadables” about science deniers, and “Selfie” about our obsession with ourselves), Storr has written a masterful guide to storytelling. Compact and illuminating, the book combines the last century of neuroscience with 4,000 years of written storytelling to pinpoint what makes stories effective, and what does not.

Becoming better at writing stories “is simply a matter of peering inwards, at the mind itself, and asking how it does it.” At its best, a story mirrors the complexity of the human condition without the fear of danger that occurs in real life.

“It’s a rollercoaster, but not one made from ramps, rails and steel wheels, but from love, hope, dread, curiosity, status play, constriction, release, unexpected change and moral outrage. Story is a thrill-ride of control.”

There is also, it should be noted, the development of empathy. Storr notes that the invention of the novel may have helped kick off the idea of human rights. Understanding the plight and experiences of others would have been impossible on any meaningful scale before this format was introduced. With the novel, other worlds were exposed. Even in our visual realm of tweet-sized stories, such an ability to communicate across borders still matters.

While no summation can perfectly capture the totality of this exceptional book, below are five techniques for becoming a better storyteller. As with any good read, Storr takes the advice he’s spent years studying and teaching. He’s an excellent writer. Reading “The Science of Storytelling” is in itself a pleasure.

As neuroscientist Rodolfo Llinás points out, all life is based on prediction. Even unicellular organisms detect changes in the environment and either embrace them (food; sex) or flee (predators). Humans are no different. We depend on and react to environmental changes all the time: the deer bounding across the street breaking up the monotony of a long drive; the distracted ambivalence of a scorned lover; the anxiety-creating noise of your phone’s alerts. We are primed for change.

Good stories require that a character changes. The best require that the protagonist faces an ultimate challenge, forcing them to confront life-altering change. As mentioned, we are all hallucinating reality all the time, so what happens when the illusion is exposed? Are we willing to explore our trauma and heal the scar tissue, or will we allow that pain to fester until death? Characters must be offered an opportunity for change or else the story never gets off the ground.

When a story is incomplete, writes literary scholar Jonathan Gottschall, our brain automatically fills in the gaps. This is part of the hallucination: we need everything to mean something. Religion is based on this neurological quirk: there must be a reason we’re here. So too is our view on medicine and healing: for some, vaccines must cause autism because teasing apart the myriad other causes, from diet and genetics to environmental changes and toxic social structures, is too overwhelming to consider. We demand meaning, yet our brains are lazy, which is why we tend to believe the simplest explanations.

Storr writes that plots “that play too loose with cause and effect risk becoming confusing, because they’re not speaking in the brain’s language.” Good stories are filled with cause and effect. As a writer, show the cause, don’t tell it. If you refuse the reader will grow uninterested.

While this is a debate I’ll likely have with fans until the end of time, season four of “Lost” lost me. There were way too many variables introduced that were dropped in the last two seasons. Too many effects, not enough causes.

We are all flawed. You, me, Will Storr, every religious figure ever. Storr cites Joseph Campbell throughout his book, yet he doesn’t include one of my favorites: “It is the imperfections of life that are lovable…it’s Christ on the cross that becomes lovable.” It’s not the Son of God but the infallible man that makes him meaningful to followers.

Just as we crave meaning, we like to believe we’re in control. Flaws often derive from the fact that control is also an illusion.

“We’re all fictional characters. We’re the partial, biased, stubborn creations of our own minds.”

A character’s “terrible power” comes from their belief that they’re right; in that rightness they feel superior to others. All stories are ultimately about character. Plots are important but without convincing characters, they fall flat. The key to creating memorable characters is by exposing their flaws. 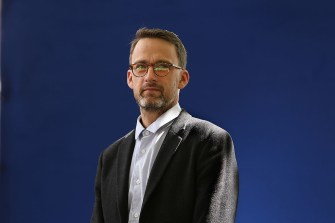 Will Storr, author of ‘The Heretics’, appears at a photocall prior to an event at the 30th Edinburgh International Book Festival, on August 13, 2013 in Edinburgh, Scotland.

Many writers fail because they become too emotionally invested in their protagonist, which is often constructed from pieces of the writer. Another way to phrase it: the writer must be willing to expose their own flaws.

The Buddhist concept of no-self derives from the idea that none of us are ever one single thing. We’re influenced by the environment we’re in and the people we’re around and the amount of caffeine we drink. We have much less willpower at night than in the morning. Our goals and desires shift by the hour. We are many people throughout the day.

“The difference,” Storr writes, “is that in life, unlike in story, the dramatic question of who we are never has a final and truly satisfying answer.” Humans are complex animals. We love stories that make us the hero. To be heroic requires recognizing the many conflicting desires and thoughts that make us what we are.

Which is really what all of this is about: championing the hero. “Stories are tribal propaganda,” Storr concludes. The modern storyteller is working with a different landscape than those past. “A unique quality of humans is that we’ve evolved the ability to think our way into many tribes simultaneously.” We’re no longer bound by the traditional tribal structure that dominated for hundreds of thousands of years, nor the caste system that commenced with the development of Harappan civilization. Today’s hero transcends prior boundaries.

Though we cannot write off tribalism completely. We’re still biologically Stone Age. Just because we have an opportunity to grow does not mean everyone chooses to. “A tribal challenge is existentially disturbing.”

We all believe in stories, and all stories are inventions. If we lose our own hero narrative, depression and anxiety are certain to follow, so invested in our stories have we become. The best storytellers carry their hero through to the end. Their flaws result in transformation. It’s what we all crave in a story because it’s what we all desire, regardless of how illusive notions of control and closure actually are.

For the time being, while we’re here, we’re storytelling animals. Will Storr has contributed a wonderful guide of how to master the craft of invention. To pull a random quote from the formative years of my childhood, as Axl Rose sang, use your illusion.

One of NASA’s original great observatories, Spitzer showed us the infrared Universe as never before.On January 30, 2020, NASA’s Spitzer Space Telescope was retired after a 17 year mission.Prior to its […]