Arby’s has a new addition to its menu: venison. From late 2016, it’s been rolling out deer burgers in select markets across Tennessee, Minnesota, Michigan, Wisconsin, Georgia, and Pennsylvania, in a play that it hopes will attract hunters and people involved in hunting culture.

Meanwhile, Subway continues to test out its Subway Café franchises across the country, to mixed results.

We’re living in a weird time for American food. Our culinary consciousness has grown by leaps and bounds in the new millennium and our eating habits have grown with it. We don’t want the same old warmed-over beef and potato crap anymore — we want better food and we know how to get it.

But the forces of capitalism wait for no stomach. As quickly as our preferences change, the food industry changes with them. Arby’s and McDonald’s are experimenting with gourmet meats and superfoods. Subway is trying to compete with Starbucks’ coffee culture.

It’s hard to eat nowadays, is what I’m getting at. No one can just grab a sandwich and be content anymore, because…

Everything is available all the time.

Not only is Anthony Bourdain on every screen within a ten-foot radius of me, eating the food I wish I could be eating in an exotic place I wish I could be visiting, but there’s a Thai hawker shop, a Brazilian churrasco restaurant, and a falafel cart that was literally named the best street food in New York City in 2010, all between here and my train stop.

How can I be expected to be satiated with heating up leftovers when I know I could have had rodízio-style short ribs and roast chicken with a side of farofa? I don’t even know what farofa is, but I know it didn’t spend the last two nights in a Tupperware.

What’s more, when I open my phone to find a recipe that uses the peppers, onions, parmesan and scallions I have on hand, three Instagram notifications pop up first. I check them quickly, then check in on my feed before heading out of the app. Within the first ten posts I see are: “hickory-smoked Niman Ranch ribs,” “shrimp-stuffed cream cheese tomato bites,” and a friend’s homemade stuffed shells.

How does a person feel content with whatever they can whip up when they’re being presented with gourmet-looking stuff like that every time they look at their phone?

And on top of that, we can’t even be satiated with our food anymore, because…

Social media is making us full.

Seriously — your Instagram feed is making you less hungry. A team of social scientists at BYU conducted a study with a sampling of 232 people to see how looking at food pics all day is affecting how we think about food.

The salty food group reported feeling less happy with the peanuts than the sweet food group, leading the researchers to conclude that looking at pictures of food makes your brain feel the effects of that food’s taste, even without eating it.

By celebrating food, we are literally killing our ability to enjoy it.

But maybe that’s a good thing, because…

We are pushing food way too far.

Holy shit, you guys, have you looked at your Instagram feeds lately? Are you guys actually eating all of this stuff?

This is a picture of soft serve vanilla ice cream with sprinkles served in a churro cone. 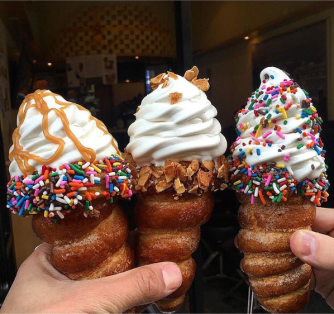 This is a Bloody Mary with a garnish that consists of shrimps, olives, pickles, and a fish taco. 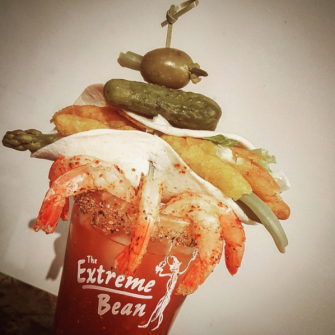 Here’s one with bacon, cheese, olives, shrimp, and a cheeseburger. 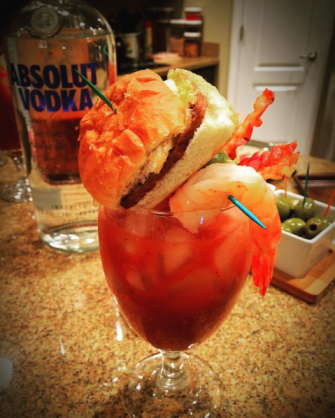 On their own, these are all ridiculously delightful treats for one to enjoy on occasion.

Taken together within the context of an Instagram feed, they’re called #foodporn. In other contexts, they’d be called overindulgence or desensitization.

“You’re being too serious,” you might say. “These are just for fun! Restaurants and influencers just do this to get people to follow them!”

You might be right — these could simply be props in a larger marketing campaign. But setting aside the troubling prospect of food being used as a prop in a world where 3.1 million children under five die of starvation every year, treating food as props is a recipe for disaster because…

We’re raising a generation of gluttons.

Growing up, I remember my parents rarely serving my siblings and I fast food. If anything, it was a rare treat, not a regular occurrence.

And of course, with Saturday morning cartoons came all the commercials that played within them. (Right, “commercials”: every single piece of television programming used to have commercial breaks, and you couldn’t fast-forward through them.)

Even with my extremely limited exposure to fast food as a child, I still knew exactly what a Big Mac tasted like. I had never eaten a Big Mac before — not only would my parents never give an eight year old a Big Mac over a kid’s meal to begin with, but the fast food joints near us were a Burger King, a Taco Bell, and a Wendy’s.

I had never eaten a Big Mac before, but I knew exactly what a Big Mac was supposed to taste like. How was that possible?

You are out of touch with what it’s like to be a kid today. You don’t know what kind of media environment they’re currently immersed in. You might recognize how vulnerable a child’s mind is to it, but the media environment you remember wasn’t so bad. You ended up alright, didn’t you?

Children today are exposed to a nightmarish amount of media. Between phones, televisions, computers, and games, they can spend up to 44.5 hours a week staring at screens. For context, that is more hours a week than the average American spends at their job. They do it more than they sleep. The average child between two and seven years old sees 12 ads a day. A teenager between 13 and 17 sees 17, on average.

And that’s only the things that are obviously ads. How many YouTube vloggers do they follow? How many pop stars on Instagram? How many influencers on Snapchat? 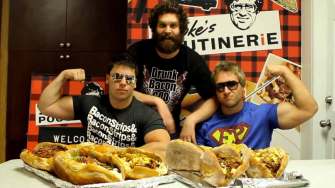 To be fair, the Epic Meal Time guys are awesome and should keep doing what they’re doing. There’s an appropriate place for extremes, be it in food, music, film, or anything else.

But right now, that extreme is becoming dangerously close to the normal.

So how did I know what a Big Mac was supposed to taste like at all of eight years old, even though I had never eaten one?

I was told to. 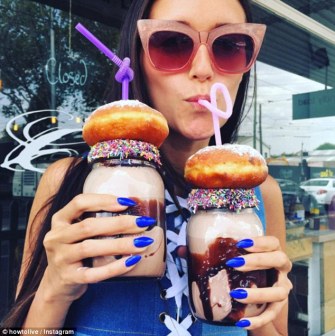 I don’t know the answer for this one, guys. More kale? Exercise? We’ve fetishized the hell out of fitness, too — I don’t think more extremes are the way to go here.

Luckily, chef Dan Barber is here to talk some sense into us:

New supernova results: is the Universe not accelerating?

Could the Nobel Prize of 2011 have been awarded without cause?“Even if I stumble on to the absolute truth of any aspect of the universe, I will not realise my luck […]