What makes a leader great? There is no shortage of explanations. One recent example can be found in Ray Dalio’s bestselling, Principles, in which he espouses the Burning Man principles of “radical transparency” and “radical truth” — because nouns are always more salable with adjectives. Bridgewater’s exceptional output, Dalio writes of the company he founded, is due to “an idea meritocracy that strives to achieve meaningful work and meaningful relationships through radical transparency.”

Prefer a talk to the labors of reading? Most do, which is in part why TED Talks exploded in popularity. You can find plenty of leadership advice from Roselinde Torres, Drew Dudley, and Simon Sinek, among others — so many others, in fact, that TED has its own 12-video playlist of inspired leadership and another 69 talks on leadership in general.

Interestingly, what you’ll often see in these videos and books is anecdotal tales. Sure, some researchers and psychologists spend years and decades interviewing Fortune 500 CEOs, compiling their perspectives into an easy-to-digest manual. For the most part, though, you’re reading memoir more than anything else: this is how I became successful.

Following trails blazed by others rarely works out well. Innovation isn’t innovation when every company is following the lead of another company. That said, roadmaps are essential for start-ups surveying the terrain. You can learn much from the successes and failures of others.

What you don’t want to do, however, is recreate the culture you’ve just come from.

That’s the topic of a new research paper by Yeun Joon Kim and Soo Min Toh, both associated with the University of Toronto’s Rotman School of Management. To be published in Academy of Management Journal, their paper argues that the culture that leaders come from is the culture they create. We are all creatures of habit, it turns out — successful or not.

Case in point: Many Americans believed the country needed a CEO to take the reigns of political leadership to even the economic playing field. Running the country like a businessperson instead of a politician, it seemed, would solve our woes. Yet the reverse is occurring; the second round of GOP tax cuts is estimated to add an additional $3.2 trillion to our deficit. The reality is he is leading the nation as he did his businesses. The problem is it was never a democratic process.

Which, as Kim and Toh explain, is to be expected. They define it as “cultural transfer perspective,” which is the act of re-creating old cultures in new situations, often to the detriment of the culture being formed. The leaders expect a clean transfer of results from old experiences to their new roles, which is rarely the case. 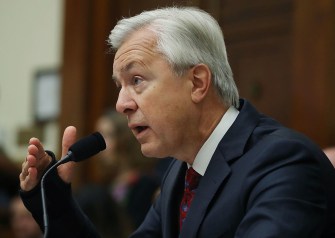 WASHINGTON, D.C. on SEPTEMBER 29: John Stumpf, Chairman and CEO of the Wells Fargo & Company, testifies before the House Financial Services Committee. The committee heard testimony on the topic of ‘An Examination of Wells Fargo’s Unauthorized Accounts and the Regulatory Response.’ Photo by Mark Wilson/Getty Images

So what we need to do is to disconnect them from their belief. They should be aware that their past experience in their former groups could actually be a liability in this new situation. To create effective cultures, leaders should look at the current situation, not the past.

Easier said than done. Innovation and disruption, those two catchphrases of our umbrella tech culture, are less common than believed. Creating a truly innovative and groundbreaking product is the result of a merging of what the culture desires, even if it doesn’t realize it at the time, and what you create to fulfill that desire.

Yet this research, while important, is not providing completely groundbreaking information. In a 2012 story on bad leadership, Forbes reports,

Leaders satisfied with the status quo, or those who tend to be more concerned about survival than growth won’t do well over the long-run. The best leaders are focused on leading change and innovation to keep their organizations fresh, dynamic and growing.

Rehashing old tropes might provide comfort to some, but it’s a terrible strategy for long-term success. If the culture isn’t working, look first at where the leader came from. That will likely provide insights into how you’ve gotten to where you are. More importantly, it might provide a method of escape.

Books that were rarely taught in 1963, when baby boomers were students, became classics when those same boomers were teachers and parents.
Neuropsych

What Was It Like When The Universe Made Its Second Generation Of Stars?

The Big Bang happened everywhere at once, but stars are a different story.The Universe, back at its inception, was almost perfectly identical everywhere. It was the same high temperature everywhere, […]