A new study shows that the presence or lack of moonlight influences when migratory birds take flight in the autumn.

In the first study of its kind, researchers at Lund University in Sweden charted the activity of 39 European nightjars, who migrate from parts of northern Europe to sub-Saharan Africa, aiming to find out how the lunar cycles and moonlight affected the birds’ departure. Using tiny tracking devices, the researchers tracked the bird’s acceleration and used GPS data to measure their position. This way, they could record the location of the birds throughout the year and their flight activity levels each night.

Results showed that the birds’ activity during their nocturnal hunt for flying insects more than doubled on moonlit nights as compared to when it was darker, such as during a new or crescent moon. This was predictable. Because sight is important to the European nightjars foraging success, it is far easier for them to snatch flying insects out of the air in the bright, moonlight nights.

But they also found something more baffling. The birds’ departure on their three-month-long autumn migration south consistently took place around ten to eleven days after the full moon. Individual birds synchronized their migration and flew off around that same time.

“Worldwide, animals migrate by the billions every year and our findings may improve our understanding of how and when many of them time their movements,” Gabriel Norevik, a postdoctoral fellow at Lund University who led the study, told PA Media. 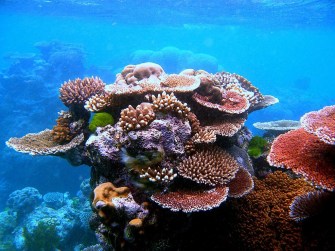 Lunar Affects on Other Species

Previous research has detailed the way that lunar patterns affect wildlife. For example, it has been discovered that Brau’s petrels synchronize their voyages to an island mating ground with the full moon. Similar to the European nightjars, researchers in that study noted that the peterals were more active during a full moon, taking advantage of the light to feed. And a 2006 study concluded that lunar cycles can affect bird hormone levels, causing daily variations in melatonin and corticosterone to vanish during full moons.

The power of lunar influence isn’t just for the birds either. For example, the Great Barrier Reef coordinates its “annual sex festival” with the moon’s cycle. This system of corals off the coast of Australia synchronizes a massive, explosive release of egg and sperm with a full moon in November. There’s even evidence to suggest that human sleep patterns and moods are affected by lunar phases.

Now, Lund University’s research findings provide a route to understanding how local ecosystems are impacted by the temporal movements of celestial bodies, which may influence other large-scale animal migrations and their environmental effects.

We can produce more stuff with less labor. So why are we still working?