Giant bird-eating centipedes may sound like something out of a science-fiction film — but they’re not.

On tiny Phillip Island, part of the South Pacific’s Norfolk Island group, the Phillip Island centipede (Cormocephalus coynei) population can kill and eat up to 3,700 seabird chicks each year.

And this is entirely natural. This unique creature endemic to Phillip Island has a diet consisting of an unusually large proportion of vertebrate animals including seabird chicks.

As large marine predators, seabirds usually sit at the top of the food chain. But our new study, published in The American Naturalist, demonstrates this isn’t always the case.

We show how large, predatory arthropods can play an important role in the food webs of island ecosystems. And the Phillip Island centipede achieves this through its highly varied diet.

A well-armed predator stirs in the night

This centipede can grow to almost one foot (or 30.5cm) in length. It is armed with a potent venom encased in two pincer-like appendages called “forcipules”, which it uses to immobilise its prey. Its body is protected by shield-like armoured plates that line each of the many segments that make up its length. 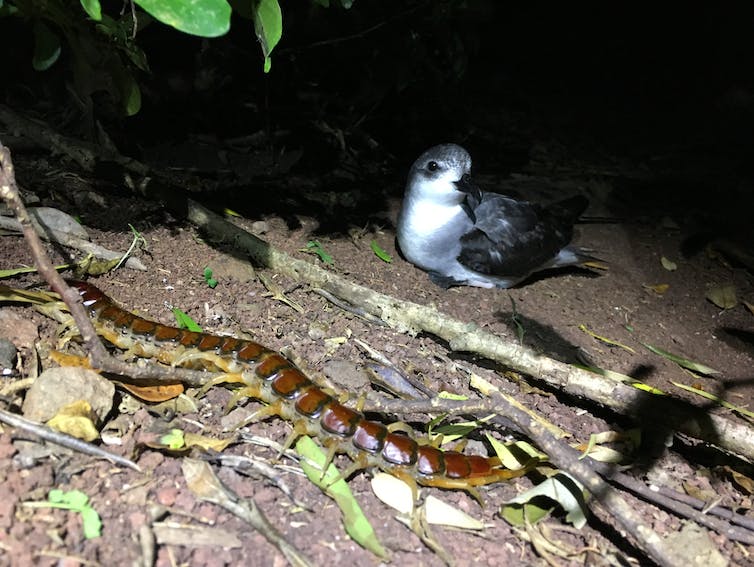 On warm and humid nights, these strictly nocturnal arthropods hunt through thick leaf litter, navigating a labyrinth of seabird burrows peppered across the forest floor. A centipede on the prowl will use its two ultra-sensitive antennae to navigate as it seeks prey.

The centipede hunts an unexpectedly varied range of quarry, from crickets to seabird chicks, geckos and skinks. It even hunts fish — dropped by seabirds called black noddies ( Anous minuta) that make their nests in the trees above.

Soon after we began our research on the ecology of Phillip Island’s burrowing seabirds, we discovered chicks of black-winged petrels (Pterodroma nigripennis) were falling prey to the Phillip Island centipede.

We knew this needed further investigation, so we set out to unravel the mystery of this large arthropod’s dietary habits. 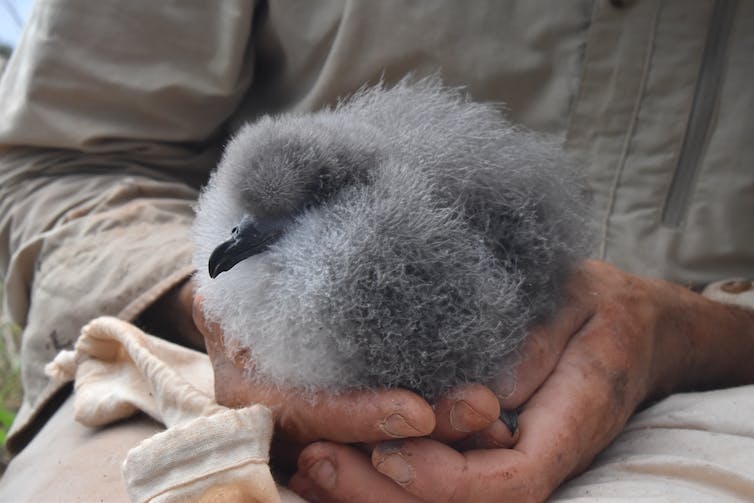 Black-winged petrel chick just prior to being weighed on Phillip Island. (Trudy Chatwin)

To find out what these centipedes were eating, we studied their feeding activities at night and recorded the prey species they were targeting. We also monitored petrel chicks in their burrow nests every few days, for months at a time.

We eventually began to see consistent injury patterns among chicks that were killed. We even witnessed one centipede attacking and eating a chick.

From the rates of predation we observed, we calculated that the Phillip Island centipede population can kill and eat between 2,109 and 3,724 petrel chicks each year. The black-winged petrels — of which there are up to 19,000 breeding pairs on the island — appear to be resilient to this level of predation.

And the predation of black-winged petrels by Phillip Island centipedes is an entirely natural predator-prey relationship. By preying on vertebrates, the centipedes trap nutrients brought from the ocean by seabirds and distribute them around the island.

In some sense, they’ve taken the place (or ecological niche) of predatory mammals, which are absent from the island. 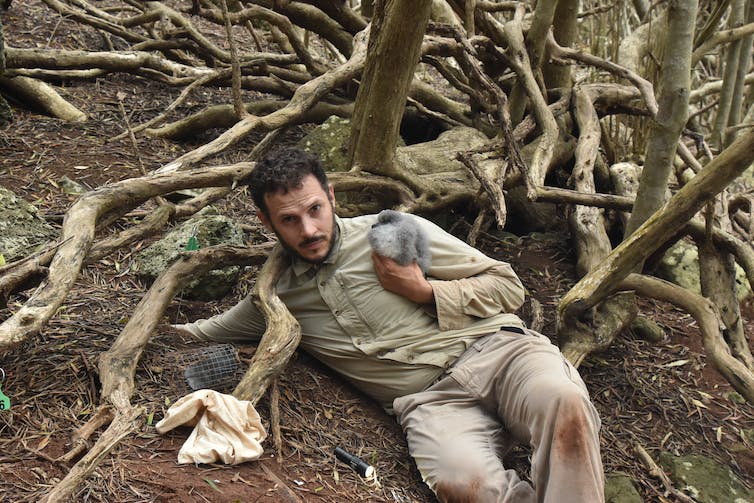 Up until just a few decades ago the Phillip Island Centipede was very rare. In fact, it was only formally described as a species in 1984.

After an intensive search in 1980, only a few small individuals were found. The species’s rarity back then was most likely due to severely degraded habitats caused by pigs, goats and rabbits introduced by humans to the island.

The removal of these invasive pests enabled black-winged petrels to colonise. Their population has since exploded and they’re now the most abundant of the 13 seabird species that breed on Phillip Island.

They provide a high-quality food source for the Phillip Island centipede and have therefore likely helped centipede population to recover.

Ancient bone deposits in the soil suggest that prior to the black-winged petrel’s arrival, Phillip Island was home to large numbers of other small burrow-nesting seabird species. It’s likely the Phillip Island centipede preyed on these seabirds too.

Now, thanks to the conservation efforts of Norfolk Island National Park, the island’s forest is regenerating alongside endemic species like the centipede, as well as the critically endangered Phillip Island hibiscus (Hibiscus insularis).

As a driver of nutrient transfer, the persistence of the Phillip Island centipede (and its healthy appetite) might just be key to the island’s ecosystem recovery. But we’ll need to do more research to fully understand the intricate links in this bustling food web.

Tags
animalsbiologyecologyinsectsnature
In this article
animalsbiologyecologyinsectsnature
Related
The Future
Synthetic dairy milk made without cows may be coming to a supermarket near you
Synthetic milk is not a sci-fi fantasy; it already exists.
The Past
Giant “toothed” birds flew over Antarctica 40 million to 50 million years ago
The spikes in their mouths would have helped them catch squid or fish.
Thinking
Lobsters don’t die from old age — they die from exhaustion
Being mortal makes life so much sweeter.
Neuropsych
Why do people sleep less than their primate relatives?
Ancient humans may have evolved to slumber efficiently — and in a crowd.
Life
Synchrony with chaos: Mathematics predicts blinking lights of a firefly swarm
A researcher explains a little-known niche within modern physics: animal collective behavior.
Up Next
Life
Endosymbiotic theory: evolution is powered by innovation and thievery
Sometimes, new combinations of preexisting things revolutionize life.