Have you ever gazed upon a vast stretch of terra nullius? Or been hypnotized by the sounds of slogger? Northerners have likely experienced blinter, while beach goers are tickled by kimmeridge, perhaps right after picking up a glassel.

In Landmarks, nature writer Robert MacFarlane gathers thousands of words in danger of extinction. (Definitions of the above are at the end of this article.) “Language,” he writes, “does not just register experience, it produces it.” He is concerned that dictionaries add technology-based words while subtracting terms associated with the natural world. This produces a screen-based existence — one good for capitalism, not so much for the planet. We abandon language at our peril.

While MacFarlane salvages words, others coin them. Australian environmental philosopher, Glenn Albrecht, hopes that humans can leave the Anthropocene—the latest geological age, dedicated to human impact on climate and the environment—behind as quickly as possible. To facilitate our exodus, Albrecht wrote Earth Emotions to introduce a number of terms, including Symbiocene: the next age, one filled with hope and optimism as humans return to a more harmonious relationship with nature. Or, at least, one in which we don’t destroy it outright.

While such a concept cannot be tackled in one article, let’s focus one term Albrecht introduces.Psychoterratic refers to how we see the world around us — and how that perspective impacts our wellbeing. A discordant view of nature, for instance, the philosopher says, facilitates “environmentally-induced mental distress and physical illness.” He continues,

We’re witnessing this imbalance in real-time. Psychoterratic effects are separate from somaterratic issues—illnesses directly caused by climate change, such as toxic pollution. The two run in parallel, however. There is no purely physical effect without emotional malaise, and vice-versa.

We think nature is on our side. In some ways, sure, such as an oxygen-rich planet and bountiful resources, but overall humans are the outcome of millions of years of biological experimentation. In many ways we evolved in spite of nature, being slow and weak among larger mammals. We thrived, for a while, until we started procreating at unsustainable rates thanks to advancements in medicine, lugging our bad habits along with us. We locked nature out of our lives, every step removed becoming safer yet less satisfied.

In America, rates of depression, anxiety, and suicide are rising. Pundits speculate on a variety of causes, some of which likely contribute, but let’s be honest: you can’t sever the relationship to your creator (in this case, the planet) and expect there not to be trauma. In fact, Albrecht suggests the creation of the Ghedeist, a secular spiritual connection that every human can invest in. It has less to do with earthy New Age philosophies, instead simply acknowledging that our lifestyles are burning down the house. We need to better coordinate to tamp down the flames.

Trauma is inevitable in the age of climate change. Government buyout programs have already begun, with homeowners in Staten Island, Houston, New Orleans, and the Florida Keys selling their houses in order to be bulldozed. Every year, American regions are becoming uninhabitable. An estimated 13 million Americans will have to move by the century’s end due to rising ocean levels. This loss of property and, more importantly, identity, crushes the human spirit.

While few want to face the prospect of relocation, some academics have called for managed retreat, such as is happening in Indonesia right now. Researchers are watching Greenland closely, as the island is considered ground zero for climate change. Residents recognize their existential crisis — given current climate trends, the situation looks bleak. How they organize and manage this transition will be greatly determined by their willpower and attitude. 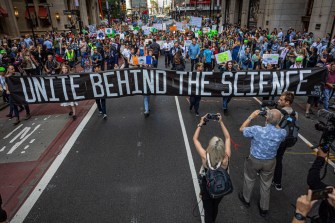 Estimated 250,000 people marched in New York City as part of a global strike protesting climate change. Organizers have estimated around four million people took to the streets in thousands of cities worldwide.

Not that all is lost. Humans would not have survived as long as we have without hope. We might have dug our own hole, but we can also pull ourselves out from it. Albrecht devotes the last chapter of his book to suggest how we can move from the Anthropecene to the Symbiocene with as little friction as possible.

Usually, calls to actions in the modern age include “self-healing” techniques, like drinking a cup of turmeric tea or shutting off your phone two hours before bedtime. While such lists offer individual healing, they are self-focused and therefore egocentric — they’re all about you. While it is true that taking care of yourself can lead to empathizing with others, Albrecht’s book details what we collectively need to do in order to transition to widespread ecological awareness. Each prescription focuses on mobilization and action, not personal restoration:

Hold politicians accountable. Not very sexy, yet every day we’re witnessing what happens when societies check out of politics. I recently discussed cancel culture as it relates to Equinox Fitness, with people canceling their memberships as a political posture while some of those same people don’t bother to vote. Individual contributions for addressing climate change matter, yet not nearly as much as electing politicians that will hold corporations accountable. Refill your reusable water bottle all you want. If you’re not actively engaged in local and national politics, it doesn’t matter. You might feel better, but little is actually being done to address the world’s most pressing problem.

Albrecht shows little patience for the economic argument proffered by politicians and CEOs. “Under the logic of gigantism and homogeneity,” he writes, “we are destroying the very economy we are trying to build. As value in the world is converted to increasing shareholder profit, everything else becomes impoverished and all forms of heritage are lost.”

The only way to begin is to actually drain the swamp. 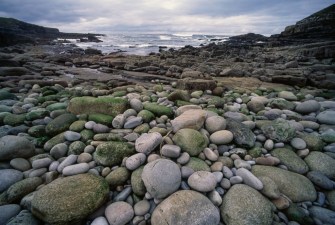 Pebbles polished by the Atlantic Ocean waves, emerging during low tide, Ireland — or, as Robert MacFarlane reminds us, glassels.

Creation of a new identity in a bioregional movement. Buddhists are especially adept at understanding interdependence. The “self” is an illusion insofar as it is inextricably entwined with the environment. Change your surroundings and you are transformed. Fixed identity is often an ideology born of fear, not reality. In a time of forthcoming mass relocations, we have to be willing to surrender who we are in order to transform into who we were destined to become, as Joseph Campbell phrased it.

Albrecht is critical of ethnicity-based nationalism. A nationalism of place is a different story. Xenophobia and racism must obviously be left behind, as does the capitalist thrust of globalization. The force that connected the world, trade (and the economics behind it), has to be rethought, as it has created a rift in our knowledge of our surroundings.

“Each generation knows less about their bioregion as an outcome of cumulative environmental desolation. The so-called environmental crisis experienced as a loss of diversity is also ultimately a human identity crisis.”

The only solution, Albrecht writes, is to reimagine societies that simultaneously address identity, inequality, and environmental destruction. This means that new cultures will have to take humans, nonhuman organisms, and landscapes into consideration.

Identify and maintain life bonds. This all leads to World War 3, which Albrecht believes will not be fought between nations, but between positive and negative Earth emotions.

“A psychoterratic drama that has been unfolding over many decades must now tip over into open emotional warfare.”

Earlier in the book, Albrecht points out that the word “emotion” comes from a Latin word meaning “disturb,” which has as its root a Latin term meaning “to move.” The neuroscientist Rodolfo Llinas made a similar observation when he noted that thinking is internalized movement; at root of cognition are emotions. How we feel about circumstances dictates the thoughts that arise, both dependent on our relationship with the environment.

When Trevor Noah asked Greta Thunberg the difference between Americans and Swedes in terms of climate change, she said only in America is it a “debate.” The world has to prepare to act; lack of readiness will only cause more emotional distress. This means that beyond partisan bickering we have to now evolve beyond tribal inclinations to reimagine what we are actually bonded to.

Albrecht has written the manual. It is at our peril to ignore it.

Carl Jung was one such person.
Thinking

Pins and needles, anyone?
Up Next
Starts With A Bang

Not Only Didn’t We Find Water On An Earth-Like Exoplanet, But We Can’t With Current Technology

It’s a great scientific opportunity of modern times, but we won’t get there with our current observatories.One of the holy grails of modern science is to find a world, beyond […]