There’s a reason they call it the “hard problem.” Consciousness: Where is it? What is it? No one single perspective seems to be able to answer all the questions we have about consciousness. Now Bernardo Kastrup thinks he’s found one. He calls his ontology idealism, and according to idealism, all of us and all we perceive are manifestations of something very much like a cosmic-scale dissociative identity disorder (DID). He suggests there’s an all-encompassing universe-wide consciousness, it has multiple personalities, and we’re them.

Kastrup’s paper is an attempt to devise an explanation for consciousness that leaves no unanswered questions behind as other commonly held perspectives do, at least at our current level of scientific knowledge. (Kastrup is a computer engineer specializing in A.I. and reconfigurable computing.)

There are a seemingly endless array of ultimately unsatisfying isms thrown at the problem of consciousness. If you’ve got some time, have a look at the Internet Encyclopedia of Philosophy. Here, though, if only to explain what panpsychism, the basis of Kastrup’s idealism, isn’t, it’ll be helpful to talk very briefly about two of the most popular ontologies to which it’s a response.

Physicalism describes the belief that consciousness is a product of interaction between different types of physical matter. For many, though, physicalism falls into a seemingly uncrossable chasm between strictly physical processes on one hand, and our “phenomenal experience”—the experience of experiencing—on the other. One is chemical, electrical, mechanical, and the other is… something else. Physical processes may be able to explain how we know a roaring fire is hot, but not what warmth feels like to us.

In substance dualism, there’s physical substance and immaterial substance, consciousness, and they’re two separate domains. This seems intuitively true to a lot of people—think body and soul—but if they are fundamentally different things, what means of exchange, or “language,” could they possibly have in common, and how could they interact? How could a physical experience make our consciousness feel a certain way, and how could a purely mental decision cause our body to take action? And where exactly could this happen? 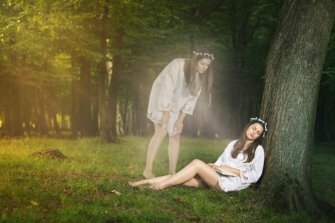 Take one dash of constitutive panpsychism

Kastrup’s system is based on an ontology growing popular with some philosophers, and with some physicists, called constitutive panpsychism. (We’ve explained this concept in greater detail before at Big Think.) It’s basically the idea that everything, all of the tiny subatomic particles that make up the universe’s mass, have consciousness, a sense of what it’s like to have an experience. We have consciousness because it’s everywhere. In this way, it’s all there is.

If so, then, how do separate and mutually aware, interacting individuals arise? One suggestion is that when enough of these conscious particles come together—there’d be countless numbers of them in each of our brains after all—a more complex, self-aware consciousness is created. Somehow. This doesn’t quite make sense, though: It’s as if you arranged all the various pieces of a car randomly in a pile and by virtue of sheer proximity, they self-combined into a Prius. This is constitutive panpsychism’s “combination” problem, as in how do all these separate glimmers of consciousness merge to create our individuated consciousnesses.

Another thing: If conscious particles can join with others to create a larger, more complex consciousness together, does this mean the universe is itself one unimaginably large unified mind? And if so, how can private, personal, concurrent but non-overlapping consciousnesses emerge from the universal consciousnesses, each one of which has its own personality and experiences? This is the ontology’s “recombination” problem, and it’s what Kastrup’s idealism attempts to solve.

Here we leave, for a little bit, the realm of brain-bending consciousness talk for the world of mental disorders and fMRI scans.

Dissociative identity disorder (DID) is the current correct term for what used to be called multiple personality disorder. It’s the mental condition in which a single person manifests multiple dissociated personalities, each of which is referred to as an “alter”. This hasn’t always been a widely accepted phenomenon, but recent research has been validating. Kastrup cites a 2014 study in which fMRI scans were performed on DID patients and actors re-creating DID symptoms. Brain activity didn’t look remotely the same in the scans, which, Kastrup notes, showed that “dissociation has an identifiable extrinsic appearance. In other words, there is something rather particular that dissociative processes look like.”

Alters are self-contained and internally consistent in terms of memories. They may even have different physical capabilities though they share the same body, as in the recently studied sighted woman who had blind alters. Kastrup writes, “Through EEGs, the doctors were able to ascertain that the brain activity normally associated with sight wasn’t present while a blind alter was in control of the woman’s body, even though her eyes were open. When a sighted alter assumed control, the usual brain activity returned.”

Just as interesting—and the real source of Kastrup’s interest in the condition—is that there’s evidence multiple alters can be active—conscious—at the same time, aware of each other, and competing for control of their body. He cites a 2009 study of an alter named “Miss Beauchamp” which found, “When she was not interacting with the world, she did not become dormant, but persisted and was active.” Other research has seen, says Kastrup, that alters “’might intervene in the lives of others [that is, other alters], intentionally interfering with their interests and activities, or at least playing mischief on them.’ It thus appears that alters can not only be concurrently conscious, but that they can also vie for dominance with each other.” 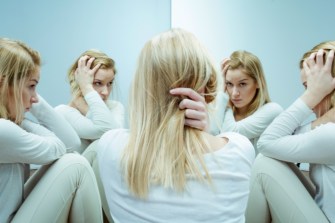 Idealism: A universe with DID

Kastrup suggests that if the entire universe is one mind, the presence of dissociative personalities creating individual consciousnesses could answer questions that defeat other ontologies. In this view, each of us is an alter, and just like conventional alters are, we can be aware of and interact with each other without mentally overlapping or seeing into each other’s minds.

Kastrup proposes our individual experiences in the physical world aren’t an issue because they’re not what they seem: In fact (he says), they’re merely “patterns of self-excitation of cosmic consciousness.” That’s to say there is no physical world, no steering wheel in front of you—rather, “It is the variety and dynamics of excitations across the underlying ‘medium’ that lead to different experiential qualities.”

This isn’t as out-there as it may at first seem. We’ve written before about cognitive scientists who suggest that the reality that surrounds us could be very different than what we think since what we see, hear, feel, etc, are merely internally generated representations that help us survive external stimuli. In Kastrup’s premise, it’s not actual, physical things out there, but merely bursts of self-excitation coming from elsewhere in the cosmic mind: There is no out there out there.

This version of idealism, if true, resolves a bunch of issues that vex other perspectives, such as the hard problem, and the DID aspect handles the combination problem. In fact, Kastrup lists in his paper five concerns his ontology must, and he feels does, satisfy:

a) Grounding experience in cosmic consciousness: how do myriad, ephemeral experiential qualities arise in one enduring cosmic consciousness?
b) The decombination problem: how do private phenomenal fields form within cosmic consciousness? Why can I not read your thoughts by simply shifting the focus of my attention?
c) Reducing perception: how can the revealed order of nature (the physical world we measure) be explained in terms of its concealed order (its underlying thoughts)? Why are the respective qualities so different?
d) Explaining the correlations between brain function and inner experience: if brain function does not constitute or generate phenomenality, why do they correlate so well?
e) Explaining a seemingly shared, autonomous world: if the world is imagined in consciousness, how can we all be imagining essentially the same world outside the control of our personal volition?

On New Year’s Eve 1899, the captain of this Pacific steamliner sailed into history. Or did he?
Up Next
Innovation

Innovation is Too Essential for Businesses to Be Precious About

True innovation and design thinking do not necessarily originate only with the sequestered brain trust of a “skunkworks” research & development style team. Instead, it is the productive combination of […]