Someone who plays video games for a few hours each day could be known simply as a devoted gamer, but the World Health Organization (WHO) has a new classification for those who take it much further than that, to a point where it becomes a serious impairment.

Gaming Disorder is now a recognized condition, appearing in the 11th Revision of the International Classification of Diseases. It will be debated for a while whether or not that’s a legitimate disorder, but if the WHO is proposing it, it could end up as such. 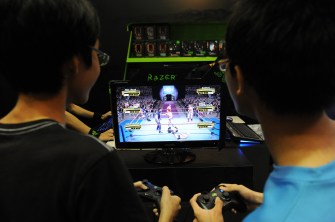 This photo taken on March 11, 2011 shows two boys slugging it out in an Xbox 360 wrestling game at the IT Show 2011 in Singapore. (ROSLAN RAHMAN/AFP/Getty Images).

Much like other compulsive and addictive disorders, there are three major characteristics of it as proposed:

1) Gaming frequency and intensity are such that other activities in life—seeing friends, going outside of the house, even talking and basic interactions with other humans—are minimized in comparison.

2) Even when negative consequences result from the addiction of either online or offline gaming, the “user” can’t stop.

3) The condition can result in disturbed sleep patterns, diet problems, and a severe reduction in physical activity.

For a diagnosis, the behavior pattern should last at least 12 months, though the WHO is proposing exceptions in severe cases.

The proposed disorder falls under the category of substance abuse or addictive behaviors, which reads: “Disorders due to substance use and addictive behaviours are mental and behavioural disorders that develop as a result of the use of predominantly psychoactive substances, including medications, or specific repetitive rewarding and reinforcing behaviours.”

Dr. Joan Harvey, a spokeswoman for the British Psychological Society, recommends caution in diagnosing gamers from a distance: “People need to understand this doesn’t mean every child who spends hours in their room playing games is an addict, otherwise medics are going to be flooded with requests for help,” she said.

The WHO writes: “Studies suggest that gaming disorder affects only a small proportion of people who engage in digital- or video-gaming activities.”

Let kids be kids. Watching over your children’s every move is a bad idea, and the long-term effects of helicopter parenting are far worse than thought.