Which came first, the chicken or the egg? It’s the kind of question children ask each other on the playground in a bid to blow minds. Others include “Could your color red be my color blue?” and “How do I know the world exists outside my mind?” and “What is the meaning of life and all that stuff?”

Turns out, children are natural philosophers, comfortably tackling the problems doctorate-brandishing philosophers have been debating for centuries — albeit without the highfalutin language. Can we describe qualia to others? Can we epistemologically attest for consciousness outside our own minds? Is there a telos the universe?

Each of these questions deserves exploration, but as the headline suggests, today we’ll be exploring the enduring predicament of chickens and eggs. Here’s your guide to finally understanding the chicken-and-egg problem. 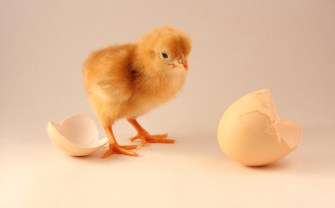 The problem in an eggshell

All chickens hatch from eggs, and all eggs are laid by chickens. This fact is nothing special; everything depends on a preexisting something for its existence. Schoolyard bewilderment sets in when our imaginations trace this line of thought back as far as possible.

This is called infinite regression: the initial link in the causal chain (chickens come from eggs) is supported by the truth of a second link (eggs come from chickens), but that proposition can only be true if the first one is beforehand. It’s the logical equivalent of standing between two mirrors so that infinite yous extend on forever.

Infinite regression inevitably leads to a dilemma. Everyday experience tells us that no effect can occur without an initial cause. But the chicken-and-egg problem makes it impossible to tell cause from effect. Each relies on the other, but it is logically unsatisfactory to say history is an endless cycle of chickens and eggs.

So which one was first? 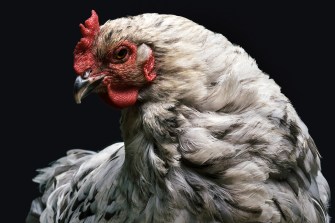 Plutarch was the first person to describe the chicken-and-egg problem, writing in hisSymposiacs: “Soon after [Alexander] proposed that perplexed question, that plague of the inquisitive, Which was first, the bird or the egg?” The gathered symposiasts then debate the matter, but the discussion quickly moves beyond metaphorical chickens and eggs to tackle the “great and weighty problem” of “whether the world had a beginning.”1

While Plutarch gave the problem its favored form, the tradition of questioning first causes goes back to at least the Ancient Greeks. The Greeks realized that the world, the universe, and everything must have had a beginning, but what caused it to come into being? And even if you solve that, what caused that cause to come into being?

Aristotle answered this causal quandary with the “unmoved mover” — an eternal, motionless substance or energy that can neither come into nor go out of existence yet started the causal chain that led to the universe.

Framing Aristotle’s concept in the language of the chicken-and-egg problem, let’s call this unmoved hen Chicken Prime. Far more than Optimus’s cowardly sibling, Chicken Prime is the initial chicken that began the causal chain of all chickens and eggs to come. But unlike other chickens, Chicken Prime requires no cause to explain her existence. She did not come into being, but has always existed out of rational necessity.

As you can see, this unmoved mover is a short hop away from the Judeo-Christian-Islamic concept of God, and for this reason, Aristotle was favored by many influential medieval philosophers. Thomas Aquinas drew from Aristotle to develop his five arguments for the existence of God, called the Five Ways.

As summarized in the Oxford Dictionary of Philosophy, the first two of these five arguments go like this: “Motion is only explicable if there exists an unmoved, first mover” and “[t]he chain of efficient causes demands a first cause.”2 The first argument is cribbed directly from Aristotle. The second solves the chicken-and-egg problem if you accept its premise.

An infinite chain of causes demands a foundational cause, and for Aquinas, that foundation is God. According to Genesis, God created animals first, so the chicken came first. More importantly, God stands as the initial cause for all things. This is called the first-cause argument.

Of course, the first-cause argument is not without its detractors. Bertrand Russell argued that the very argument contradicts itself. If every event must have a preceding cause, he argued, then the very idea of a first cause would be contradictory.2 It is logical sleight of hand. 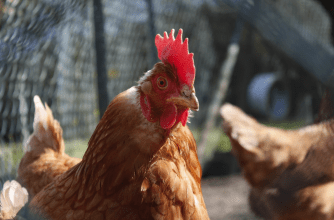 The philosopher’s chicken is metaphorical, so let’s restate the question from a technical perspective. Which came first, actual chickens or actual eggs? At this juncture, scientific evidence allows us to solve the problem. The answer, it turns out, is the egg.

Modern birds evolved from small, carnivorous dinosaurs. The first intermediate species between birds and therapods, such asArchaeopteryx, lived during the late Jurassic, and the true ancestor of birds probably arrived during the late Cretaceous.3 This lineage tells us that birds evolved much later than dinosaurs or ancient reptiles, both of which laid eggs. As such, the egg must have come first.

But this answer sidesteps the question, doesn’t it? What we really want to know is: Which came first, the chicken or the chicken egg? Even phrased liked this, the egg wins out.

Chickens have a labyrinthine genealogy. The earliest fossil evidence for the species’ domestication appears in northeastern China and dates to around 5,400 BCE; however, the chicken’s wild ancestors were likely the junglefowl of southeast Asia.

Its primary progenitor includes the red junglefowl (Gallus gallus), but scientists have identified other species that bred with G. gallus on its way to chickenhood. One of them, the grey junglefowl of southern India, is thought to have given the modern chicken its yellow skin — leaving scientists befuddled as to whether chickens were domesticated in southeast Asia before spreading outward, or if their progenitors were domesticated in several locations before being brought together.4

Either way, the chicken lineage is one of many wild and domesticated fowl being interbred. At one point in this history, two chicken-like birds — let’s call them a proto-rooster and proto-hen — mated, and the proto-hen laid a clutch of eggs. One of these eggs housed an offspring with DNA mutations, resulting in what we would consider the first chicken.5

In time, this offspring’s offspring would diverge enough for speciation, but since the proto-hen produced the egg the chicken was born from, we can safety say the egg came first.

Or, as Neil DeGrasse Tyson succinctly put it: “Just to settle it once and for all: Which came first the Chicken or the Egg? The Egg – laid by a bird that was not a Chicken[.]” 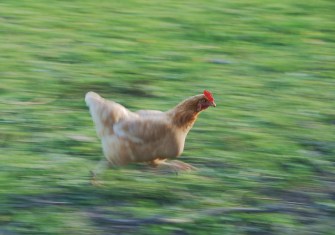 Chicken Prime or the Cosmic Egg?

Thanks to science, we know the egg came before the chicken, but we haven’t really settled the debate that led Plutarch to raise the question millennia ago.

We’ve discovered many links in the causal chain of the universe. We know that life on Earth came to be through a process called evolution and that the Earth accreted from rocks and debris orbiting the Sun and that the Sun formed when gravity pulled in immense amounts of dust and gas together and that the universe sprang forth from a high-density, high-temperature state. But that’s as far back as we can manage.

As astrophysicist Paul Sutter wrote: “Earlier than 10^-36 seconds, we simply don’t understand the nature of the universe. The Big Bang theory is fantastic at describing everything after that, but before it, we’re a bit lost. Get this: At small enough scales, we don’t even know if the word ‘before’ even makes sense!”

Even with our accumulated knowledge, there’s always another link in the causal chain, another first cause in need of a mover, another egg in need of a chicken.

As such, children and philosophers can still get mileage out of the chicken-and-egg problem. They just need to tweak the wording a bit. How about this: Which came first, Chicken Prime or the Cosmic Egg?

4. How the chicken conquered the world. Andrew Lawler and Jerry Adler. Smithsonian.com. Retrieved on Aug. 9, from https://www.smithsonianmag.com/history/how-the-chicken-conquered-the-world-87583657/

5. FYI: Which came first, the chicken or the egg? Daniel Engher. Popular Science. Retrieved on Aug. 9, from https://www.popsci.com/science/article/2013-02/fyi-which-came-first-c

New 700-mph hyperloop pod can go from L.A. to San Francisco in 30 minutes

Hyperloop Transportation Technologies recently unveiled the Quintero One, a hyperloop passenger capsule that can travel at a top speed of about 760 mph.