You’re reading this, but you’re also not. About four times a second, your brain breaks focus to “check in” on your surroundings—and then refocuses back on the task at hand. According to a fascinating study just published in Neuron, you never really notice that you’re “zooming out” about 240 times a minute for milliseconds at a time.

You’re basically creating a narrative based on the huge amount of stimuli and data around you at any given time, zooming in and out of consciousness. The more stimuli, the more vivid the narrative and therefore the memory: the constant hustle and jam-packed-ness of New York City is a prime reason why artists have found New York City such an inspiration. Simply put: there’s a lot more going on, so your memories are a lot more vivid than they would be in, say, Bixby, Oklahoma.

So what’s causing this constant slipping in-and-out of consciousness? Your frontoparietal network. This brain system is a hub for gathering information and registering all the data intake to try to make sense out of it. Think of it as the editor-in-chief trying to make a story from 100 different reporters. Now multiply that number times several thousand times a minute, and you can get a sense of the intense amount of work this takes.

Think of a memory: it plays like a movie in your head, doesn’t it? What you’re most likely doing, says the study, is remembering a static image and building around it. This experience, to us, feels completely normal as we are very used to our brain filling in the gaps between what it does and doesn’t know: the more new information, the better, which is why you can remember a childhood birthday party 20-plus years in the past a lot more vividly than you do, say, driving down the freeway two days ago. The freeway doesn’t provide a lot of stimuli (save for the driving, which you’re used to), but the birthday party did.

The frontoparietal network is highlighted here in yellow: 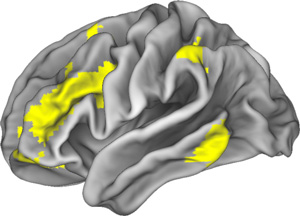 Even when you think you’re focused on something, the brain doesn’t turn this function off and keeps firing away, four times a second, or 240 times a minute. This isn’t a bug but a feature: it was particularly useful to our ancestors, as they lived in a world of constant fear and danger around every corner. These days, the majority of the western world is pampered beyond belief so that survival instinct just renders us as incredibly distracted. So, even as you’re reading this sentence, your mind is subliminally worrying about whether or not a bear is going to eat you, or something else will kill you. Think that’s a silly sentiment? Consider the fact that humans have been around for 200,000 years and we’ve only been not worried about being eaten by lions, tigers, and bears for maybe 6,000 years.

So, technically, you’re unconscious 240 times a minute. But it’s important to read the word unconscious not in the context of “totally out of it”—you’re simply not registering the immediate present.

When we forget this instinct, it’s called tunnel vision, and it’s exactly why we can lose ourselves in a good story or a good movie (it might seem obvious when you think about how a movie theater is set up: a very dark room with one large focal point). It’s also why during special moments you feel as if you can feel everything: like, say, a birthday party, a wedding, etc. The feeling of happiness, on a biological level, is produced by a chemical in your brain called cortisol. And when cortisol floods your frontoparietal network it’s sort of like putting gasoline on a BBQ; you’re likely to remember a lot more about the snapshot your brain is taking.

So when Adele sings “It felt like a movie…“, there’s a scientific reason that it did. The downside of this is that, technically, four times a second your brain is de-focusing to make sure you’re not in any danger. It might feel like a movie, but you’re still worried about bears.

Two men formerly close to President Donald Trump are now facing prison in a development that could prove consequential for Trump’s longevity in office and the U.S. political system in general.