Does it matter more who you love or how you love? A large machine learning study analyzed data from thousands of couples to identify which characteristics are most vital to predicting the success or failure of a relationship. Using artificial intelligence, researchers found that the individual traits of the partners had less to do with making the couple happy than the characteristics of the relationship itself.

To put it another way – the dynamic of the relationship you create, with its shared experiences and in-jokes, is more important than the specific traits of the one you are with.

Joel put their findings in context:

According to Joel, feeling good about your relationship can have profound impacts on your health and well-being, as well as productivity at work. Their team identified five predictors of relationship success:

1. Perceived Partner Commitment – the belief in your partner’s full level of commitment is the most reliable predictor of the health of the relationship.

2. Intimacy / appreciation – feeling close to or being appreciated by your partner.

3. Sexual satisfaction – how satisfied the partners are with the quality of their sex life.

4. Perceived Partner Satisfaction – how happy one thinks their partners feels about the relationship.

5. Conflict – how often the partners fight. 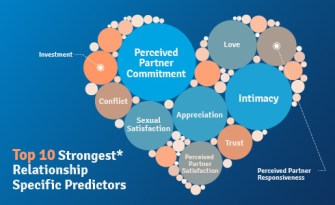 If you notice, love figures on this list, being nearly as important as the last two items, but is not in the top position.

The most important individual differences that affect relationships were found to be satisfaction with life, negativity, depression, attachment anxiety (worrying about the relationship), and attachment avoidance (not getting too attached). Interestingly, all of these accounted for just about 21 percent of variance in the other partner’s relationship satisfaction.

Besides Joel, the study involved Paul Eastwick from University of California, Davis, and 84 other international scholars. “Who I am’ doesn’t really matter once I know ‘who I am when I am with you,” Eastwick noted.

You can read their study, which utilized the machine learning system Random Forests, published in the Proceedings of the National Academy of Sciences.

Our inaugural special issue is focused on progress — the search for, the study of, and the project towards a better world.
Up Next
Starts With A Bang

The view is different for each of us, but this perspective unites us all.From anywhere on Earth, the entire sky rotates a full 360° every 24 hours.From Earth, star trails always […]