At 8:07am on a Saturday morning in early 2018, phones throughout Hawaii buzzed with a distressing message.

“Ballistic missile threat inbound to Hawaii. Seek immediate shelter,” it read. “This is not a drill.” Similar warnings interrupted television and radio transmissions. And until a follow-up message 38 minutes later clarified that it had been a false alarm, many residents were left expecting the worst.

But according to a new study published in American Psychologist, the toll on Hawaii residents lasted much longer than those terrifying minutes. Researchers analysing the kinds of words tweeted before and after the false alarm have found that anxiety seemed to be heightened for days — particularly among those who appeared the least anxious to begin with.

Previous experimental work has suggested that the anxiety provoked by an imminent, unavoidable threat like an electric shock increases as the expected event draws closer — and continues to persist even after it is revealed to have been a false alarm.

But these findings have been restricted to artificial scenarios in the lab, note Nickolas Jones and Roxane Cohen Silver in the new paper. So the pair turned to the Hawaii missile alert to see whether similar patterns of anxiety occur after a real-world false alarm.

The researchers examined the tweets of almost 15,000 Twitter users, all of whom were following Hawaiian organisations, in the 6 weeks before and 3 weeks after the alert. To get a measure of anxiety, they calculated the proportion of tweets that contained anxiety words (like “afraid” or “worried”) listed in the Linguistic Inquiry and Word Count programme, a tool often used by psychologists to analyse the content of texts.

The pair found that the overall daily proportion of tweets containing anxiety words remained relatively stable in the weeks leading up to the false alarm, hovering around 3%. Unsurprisingly, that number leapt up on the day of the alert, to about 8%. A detailed look at tweets across the course of the day revealed that the number of anxiety-related tweets began to rise immediately after the alert was sent out — and continued to increase until the all clear was given 38 minutes later, consistent with work suggesting anxiety builds as a threat gets closer. 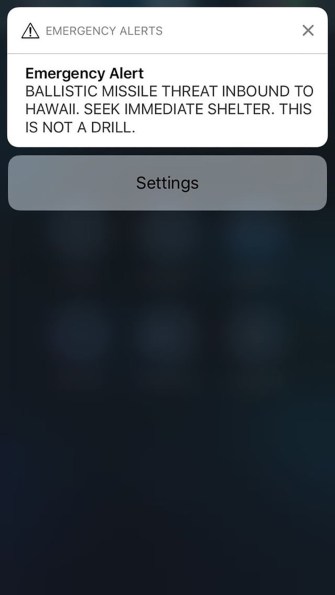 After the all clear, the proportion of tweets expressing anxiety gradually decreased — but, overall, it took 2 days to drop back down to a stable level. However, this pattern also depended on the tweeters’ baseline anxiety. A “low anxiety” group, whose tweets in the weeks before the alert had contained no anxiety words, took a whole 41 hours to level out after the false alarm; even then, they continued to use more anxiety words than before. In contrast, a “medium anxiety” group, whose baseline tweeting did contain some expressions of anxiety, took just 23 hours to stabilise. Although counterintuitive, this result is in-line with findings that moderate levels of past adverse experiences may boost resilience.

Finally — and unexpectedly — a small “high anxiety” group actually made fewer tweets containing anxiety words after the alert. The authors suggest this could reflect a change of perspective brought on by the threat of death and destruction. “Users in the high prealert anxiety group may have recognized how much worse things could have been had the missile threat been real,” they write.

Of course, the extent to which the content of tweets is a valid measure in psychological research is a matter of some debate. Twitter users are not representative of the population more broadly, for instance, a limitation the authors acknowledge. Some recent research has also suggested that a person’s use of emotion-related words isn’t necessarily a good indication of their actual subjective feelings.

Nevertheless, the results provide some of the first real-world evidence that — for most people — anxiety is heightened for some time after a false alarm. “Our results reveal how potently frightening a crisis period can be and highlight how intense experiences like this may have lasting effects,” the authors write, stressing the need for agencies to increase outreach and ensure residents receive fast, accurate information when false alarms occur.

– This is not a drill: Anxiety on Twitter following the 2018 Hawaii false missile alert.

Reprinted with permission of The British Psychological Society. Read the original article.

Or why I’m coming out as an impatient optimist.
Up Next
Life

Contrary to popular belief, the Amazon rainforest does not produce 20% of our planet’s oxygen.