However, for those of us who profess to have no artistic talent whatsoever, it may be that cultivating this skill is even more important than for those who have, allegedly, “innate” artistic talent. So, is creating art a life skill? What kind of benefits can it bring? And, crucially, can it be taught, or is the act of creating something limited only to the lucky few?

Our innate love of art

In a cave in Indonesia, there are outlines of human hands traced in paint. To date, these tracings are the oldest example of art, dating back nearly 40,000 years ago. Human beings don’t consistently perform an activity for 40,000 unless its hardwired into us, and making art is something that is as human as communicating, laughing, or breathing air.

“My best guess is that art itself is not a direct product of natural selection, but is a byproduct of our bigger brains — which themselves evolved for survival reasons. Art is just something we cannot help but do. While we may not need art to survive, our lives would be entirely different without it. The arts are a way of making sense of and understanding ourselves and others, a form of meaning-making just as important as are the sciences.”

A sense of aesthetic appreciation is so innate in humans that we easily distinguish between and prefer abstract art created by a master (those paintings with, say, a few splotches of color that look like anybody could do it) over artificially generated copies or abstract works of art created by children and animals.

So, one big argument for pursuing your artistic capability is simply because it’s a natural, human thing to do. The odds are good you going to make something creative at some point, so why not develop that ability further? This in and of itself doesn’t serve as a particularly compelling reason, but there are plenty of benefits that producing art can bring. 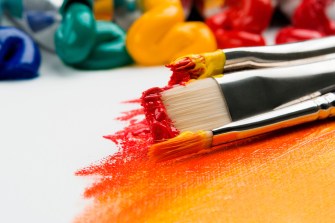 The physical and mental benefits of making art

Research has shown that producing art has a positive impact on human psychology. One study compared two groups that spent 10 weeks doing an art-related activity. The first group produced visual art in a class, while the second spent time cognitively evaluating artwork at a museum. After the 10-week intervention, the researchers compared the groups using an MRI.

They found that the art production group had significantly more connections in a critical part of the brain called the default mode network. The default mode network is associated with a variety of functions, such as reflecting on one’s emotional state, empathy, and imagining the future. Not only was this important part of the brain strengthened by producing art, but the participants in the art-production group also became better able to cope with stress.

Other research has shown that producing visual art diminishes the experience of negative emotions and increases positive ones and reduces depression, stress, and anxiety. There appears to be a significant connection between producing visual art and physical health as well, especially since visual art production has been linked with reducing cortisol, the hormone associated with stress.

In older adults, participating in art classes improved their perception of their health and made them more active. They also visited their doctors more frequently and required less medication.

Can art be taught?

It’s clear that producing art can improve cognitive function and physical health, but for those who don’t believe they have artistic talent, these findings may just represent a missed opportunity. Some believe that art can’t be taught. First, it’s important to remember that the studies referenced previously randomly assigned people to produce artwork; none of those individuals were selected for any innate artistic talent, and so the benefits found by those studies can be acquired by anybody.

Many artists believe that while anybody can be taught art to some extent, artistic geniuses are born rather than made. “There is no question in my mind that artists are born,” says Nancy Locke, a professor of art history at Penn State. But, she argues, its crucial to cultivate this innate talent.

Research backs this up to some extent. In the Big Five personality theory, the trait of “openness to experience” — or the trait that predicts whether an individual enjoys getting out of their comfort zone and seeking out unfamiliar experiences — has been shown to be associated with preferences for artistic activities. Psychologists believe that personality traits such as openness to experience are a combination of both genetics and the environment, so it’s fair to say that artistic talent is indeed innate to some extent.

What does this mean for the aspiring artist? The scientific literature referenced above suggests that the many benefits of art production can be gained simply be practicing art regardless of talent. And, since even those with innate talents can’t go very far in art without practice, it may be the case that you possess such talent but have never cultivated it.

The cognitive benefits of creating art aren’t even contingent on skill. The next time you have to attend a lecture or study something, allow yourself to doodle in the margins: Studies have shown that you’ll be 29 percent more likely to recall information and less likely to daydream.

Increasingly, the idea that producing art is some mysterious, unknowable process is diminishing. Instead, creating art is more akin to the visual analog of writing; everybody needs to write a little in the course of their day, not just great writers. Similarly, we should acknowledge that everybody needs to create a bit of art every day, either for greater recall, improved cognition, to reduce stress, or simply for the natural pleasure of creating something.

5-HTP could help both constipation and depression, but dosage matters.