Many of us do not look, feel or act our age. Sooner or later, of course, time tends to catch up. Some abilities that we’ve had in our younger versions are no longer the same. Yet there are other ways in which we are sharper and smarter than we used to be. What researchers found out is that different mental skills peak at different times of a person’s life.

A 2015 study by MIT’s Joshua Hartshorne and Laura Germine from Harvard determined when exactly various kinds of cognitive performances were the strongest. Their research involved several experiments, with much data coming from two websites they set up that featured cognitive tests. These sites generated data from almost 3 million people in a few years.

One test the scientists ran involved 2,450 Americans from diverse backgrounds and locations, performing 15 tasks that ranged from math to vocabulary quizzes to picture completion.

What the results showed is that while the majority of mental power skills like memory, retelling stories and pattern recognition peaked from late teens into the 20s, a few notable ones got better with time and reached full potency by the 50s. These included vocabulary, math, general knowledge and comprehension (which was a test of how well participants could explain certain concepts). Such skills come from accumulated knowledge which benefits from a lifetime of experience.

Vocabulary, in fact, peaked even later, in the late 60s to early 70s. So now you know why grandpa is so good at crosswords.

Here’s a chart from the study showing how cognitive functions change over time: 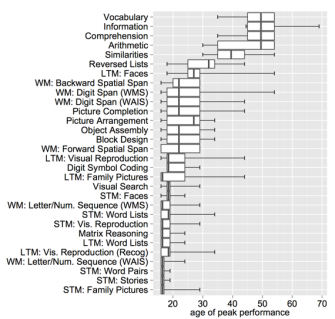 For another way of looking at how abilities and time are related, look at the green “family pictures” line in the chart below. The underlying experiment involved participants being shown family pictures, which they had to recall in detail: 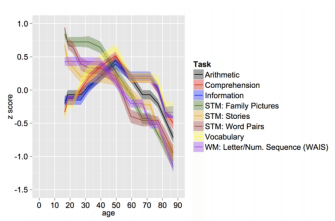 And here’s a win for the 40+ folks – the below representation of a test of 10,000 visitors to TestMyBrain.org shows that older subjects did better than the young on the vocabulary test. The under-30 group did much better on memory-related tasks, however. 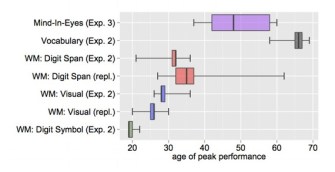 Is there one age when all of your mental powers are at their maximum? The researchers don’t think so.

A 2014 study by Canadian researchers from Simon Fraser University provided another look at the question. They analyzed data from 3,305 players of the game “Starcraft II” between the ages of 16 to 44.

What they found is that younger players had significant advantages in certain tasks. For example, a 24-year-old would be 150 millisecond faster than a player of the same caliber who is 39. In general, the researchers found 24 to be a key age, after which player abilities slowly declined, losing about 15% of the speed every 15 years.

Older players did perform better in some aspects, making up for the slower brain processing by using simpler strategies and being more efficient. They were, in other words, wiser.

Our inaugural special issue is focused on progress — the search for, the study of, and the project towards a better world.
Up Next
Technology & Innovation

You’re Being Spied on by ISPs. Time to Set Up a VPN and Fight Back.

Your Internet Service Providers are collecting and selling your browsing history. Does that bother you? If so, it may be time to setup a Virtual Private Network (VPN) to better encrypt your data and spoof your location.