Would you be willing to attach artificial limbs to enhance your body? A research team that asked people to use robotic extra thumbs found that their brains quickly adapted to body augmentation. Humans of the future are likely to utilize body parts with improvements, the scientists propose.

The robotic appendage, dubbed Third Thumb, was developed by designer Dani Clode and Professor Tamar Makin’s neuroscience team at University College London. The researchers were looking to utilize prosthetics not only to restore lost functions but to extend the human body’s abilities. Professor Tamar Makin‘s group specifically focused on how the brain handled such an adaptation by observing 20 participants who used the thumb over the course of five days. 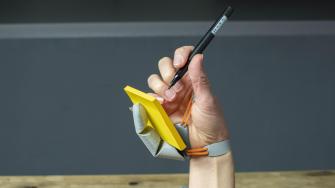 How does it work?

The subjects were trained in the device’s operations using a combination of tasks like picking up various objects or holding wine glasses. They were also asked to take the thumbs home to apply the extra fingers in everyday situations. Overall, the participants wore the robotic limbs for two to six hours each day. The control group had ten people who were outfitted with static thumbs.

Professor Makin remarked that while body augmentation is a “growing field” that looks to expand people’s physical abilities, it has not been clear how human brains would adapt to the new limbs. “By studying people using Dani’s cleverly-designed Third Thumb, we sought to answer key questions around whether the human brain can support an extra body part, and how the technology might impact our brain,” she elaborated. 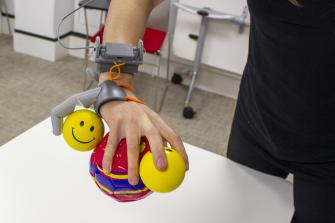 Making the Third Thumb was accomplished via 3D-printing. The thumb can be customized and worn opposite a person’s existing thumb, next to the pinky finger. The attachment is controlled by pressure sensors on the feet of the wearer, placed under the big toes. The toe sensors are connected to the robotic thumb through a wireless connection, allowing the user to control how the thumb moves with even the smallest pressure changes. 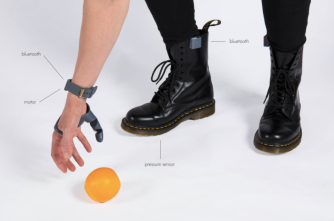 To operate the device, sensors were implanted in the shoes of the participantCredit: University College London.

The results of the research, published in Science Robotics, indicate that augmenting your body is a real possibility, especially with further advancements in technology. “Together, our findings demonstrate that motor augmentation can be readily achieved, with potential for flexible use, reduced cognitive reliance, and increased sense of embodiment,” write the scientists.

The participants were able to learn how to operate the thumbs very quickly, while the training helped them gain full mastery and dexterity. The thumb users got so good at it, that they could even use the extra limbs while distracted or blindfolded. 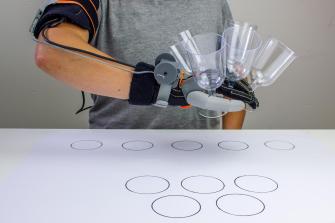 Designer Dani Clode said, “Our study shows that people can quickly learn to control an augmentation device and use it for their benefit, without overthinking. We saw that while using the Third Thumb, people changed their natural hand movements, and they also reported that the robotic thumb felt like part of their own body.”

The study’s first author, Paulina Kieliba, foresees some immediate applications. For instance, the extra thumbs could help a surgeon operate without an assistant. Or a factory worker could manage more on their own, with less help. The extra limbs could also help those with prosthetics to maximize the potential of their bodies, for example by accomplishing everything they need with just one hand.

This small phase 1 study suggests that CRISPR-engineered T cells are safe and potentially effective, but there is a long way to go.
Up Next
Life

The Vertebrate Genomes Project may spell good news for the kakapo and the vaquita.