More precisely, it might be a world without love’s most adulated form: romantic love. For many people, romantic love is the pinnacle of human experience. But feelings don’t exist in a cultural void. The heartbreak-kind of love is a relatively new and culturally specific experience, masquerading as the universal meaning of life.

In Western culture, hegemonic romantic love is marked by what the American psychologist Dorothy Tennov in 1979 called ‘limerence’ or all-consuming romantic and sexual passion, which ideally evolves into a monogamous partnership and often marriage. Thus, in increasingly secular, unspiritual and atomised cultures, romantic love becomes deified.

Being in love, according to scientists, does have a biological basis, but how we experience it is not inevitable. For much of human history, what we call romantic love today would have been called an illness; marriage was about assets and reproduction.

The Industrial Revolution changed things. New economic realities and Enlightenment values about individual happiness meant that romantic love mattered. While marriage remained – and remains – closely tied to patriarchal control, it attained a new quality. Lifelong emotional, intellectual and sexual fulfilment – and monogamy for men, not only for women – became the ideal. Ever since, this kind of relationship has been propagated by capitalist culture.

The fact that heartbreak is linked to this recent romantic history is unlikely to be much comfort to those in despair. The fact that emotions are refracted through culture probably won’t reduce their potency.

There is little beside romantic love that many will pursue so doggedly, knowing it is likely to result in agony. Whether through conflict, betrayal or separation, love is almost certain to end in heartbreak. Even in ‘successful’ partnerships, someone’s going to die eventually. It’s no wonder heartbreak is readily accepted as the price of romantic love; we are socialised to believe that this kind of relationship is our raison d’être.

But heartbreak isn’t the only problem with our romantic scripts. Conventional romantic love is rooted in oppressive structures. Burdens of emotional and domestic labour still fall disproportionately on women. White, nondisabled, cis, monogamous, thin, heterosexual couples (ideally married with children) are held up as the loving ideal, with people who don’t fit this mould often discriminated against. Those who don’t have romantic or sexual partnerships at all, whether by choice or not, can feel alienated and alone, despite having other meaningful relationships.

Even if we could salvage romantic love from its worst bedfellows – for example, if we eliminated its heterosexism – the fact remains: it is likely to end in tears, even mental or physical illness. Worse still, perceptions of romantic love as overpowering mean it is used to explain violence.

What if there was a way to reap the depths and heights of love without the heartbreak?

Romantic love has the potential to cause agony because we give such unions immense weight over others. In this culture of love, romantic and sexual partnerships are elevated to such an extent that ‘relationship’ is usually shorthand for romantic. What about all the other relationships we might have in our lives?

The concept of ‘relationship anarchy’, coined in 2006 by the Swedish feminist and computer scientist Andie Nordgren, proposes that how we construct, conduct and prioritise our relationships should be up to us. It is not a libertarian ‘free-for-all’ philosophy, but one with empathy, communication and consent at its heart. It is distinct from nonmonogamy or polyamory; it might or might not contain elements of both. By questioning ‘commonsense’ ways of doing relationships, people can create bonds according to their beliefs, needs and desires. Crucially, relationship anarchy means that traditional romantic love is not automatically placed at the top of a hierarchy of ‘lesser’ relationships.

Although the concept of ‘anarchy’ is a radical one, a person guided by this approach might have a surprisingly ordinary life. For some, it might simply mean looking afresh at a cherished marriage, and deciding that life would be richer if friendships were similarly nurtured. Or realising that ‘the love of your life’ was not still to be found but in fact already there, waiting to be fostered, in yourself or in your community.

For others, engaging with relationship anarchy might mean making and remaking a life’s relationships from scratch. For instance, by freeing yourself from the notion that a romantic partnership must follow a predetermined path, and instead negotiating multiple, loving, ethically nonmonogamous relationships that might ebb and flow over time. It could mean deciding to raise children within a platonic, emotionally intimate relationship between three people, and having sexual connections outside of this – or none at all.

So the idea that everyone is unique becomes extended, and when every relationship is unique the possibilities are endless. Once we permit ourselves to question love, it appears not only ludicrous but authoritarian that the infinitely complex arena of human relationships would suit a ‘one-size-fits-all’ approach. 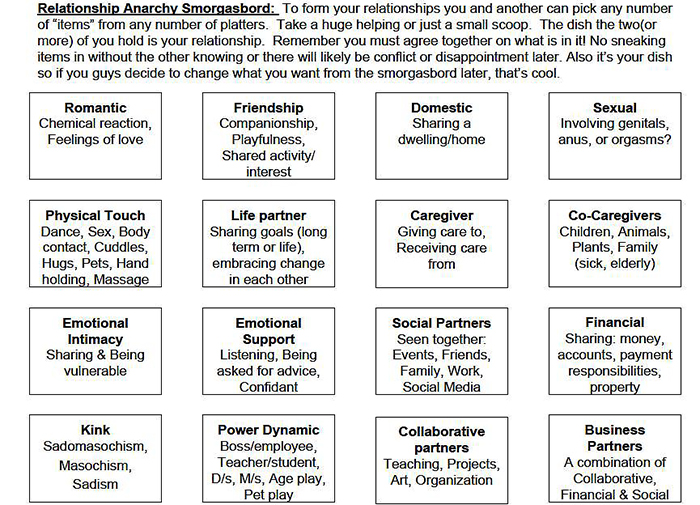 It isn’t hard to see how relationship anarchy might alleviate heartbreak. It is widely accepted that having good friends to ‘fall back on’ helps to heal a broken heart. But in relationship anarchy, friends are more than insurance policy. We wouldn’t drop friends while ‘coupled up’, only to pick them up when sending out wedding invitations, or nursing heartbreak. Instead, we’d consistently honour all our valued bonds. If we granted our varied relationships more of the investment we usually grant disproportionately to one person, those bonds would likely become just as vital to our hearts’ health as any romantic or sexual partner.

Relationship anarchists can create a ‘love life’ that is not dependent on one romantic partner who is ‘their world’, but on a tapestry of profound connections – whether platonic, romantic or sexual. As Nordgren writes in her manifesto, ‘love is abundant’, not a ‘limited resource that can only be real if restricted to a couple’. Redistributing love does not dilute the love we feel for a particular, dear person. Indeed, building a network of intimate connections can strengthen them all – in part because it strengthens our relationship with ourselves.

Relationship anarchy won’t eliminate heartbreak – but we probably wouldn’t want it to. That depth of feeling is often beautiful, and responsible for much of the arts. Like love itself, heartbreak excavates souls and decimates egos, forcing us to look at our deepest crevices and learn things we might not otherwise. In heartbreak’s seemingly merciless grip, we have a rare opportunity for rebirth.

Surely, a world without heartbreak is a world without the kind of vulnerability that makes us know we’re alive. Just as surely, being conscious about how we relate to ourselves and to others – rather than automatically privileging one relationship type – can empower us to build a life so rich that we don’t feel as if we’ve lost ‘everything’ when we lose one love among many.

Tags
communicationfeminismfriendshipgendergender equalityhappinesslovemarriagepsychologyrelationshipsSextrust
In this article
communicationfeminismfriendshipgendergender equalityhappinesslovemarriagepsychologyrelationshipsSextrust
Related
Neuropsych
We all can reach a “flow state.” Here’s how.
Perform at your mental peak.
The Present
Is geo-tracking your child the new “helicopter parenting”?
“My dad asked me if I had been to tutoring and I lied… Then he showed me the tablet.”
High Culture
Could letting social media users rank accuracy help stop misinformation?
People naturally judge fact from fiction in offline social settings, so why is it so hard online?
Sponsored
How to spot an investment bubble before it’s too late
Between the instability of the real estate market and cryptocurrency fluctuations, everyone has been talking about bubbles. But what are they, really?
The Learning Curve
3 rules to express your thoughts so that everyone will understand you
Actor and science communicator Alan Alda shares his three rules of three for effective and empathic communication.
Up Next
Hard Science
Bizarre ‘dark fluid’ with negative mass could dominate the universe – what my research suggests
A new study may change the face of astrophysics.