It’s no surprise that corvids — the “crow family” of birds that also includes ravens, jays, magpies, and nutcrackers — are smart. They use tools, recognize faces, leave gifts for people they like, and there’s even a video on Facebook showing a crow nudging a stubborn little hedgehog out of traffic. Corvids will also drop rocks into water to push floating food their way.

What is perhaps surprising is what the authors of a new study published last week in the journal Science have found: Crows are capable of thinking about their own thoughts as they work out problems. This is a level of self-awareness previously believed to signify the kind of higher intelligence that only humans and possibly a few other mammals possess. A crow knows what a crow knows, and if this brings the word sentience to your mind, you may be right. 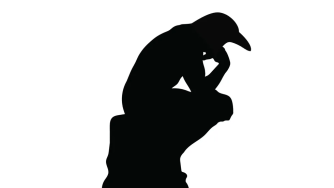 It’s long been assumed that higher intellectual functioning is strictly the product of a layered cerebral cortex. But bird brains are different. The authors of the study found crows’ unlayered but neuron-dense pallium may play a similar role for the avians. Supporting this possibility, another study published last week in Science finds that the neuroanatomy of pigeons and barn owls may also support higher intelligence.

“It has been a good week for bird brains!” crow expert John Marzluff of the University of Washington tells Stat. (He was not involved in either study.)

Corvids are known to be as mentally capable as monkeys and great apes. However, bird neurons are so much smaller that their palliums actually contain more of them than would be found in an equivalent-sized primate cortex. This may constitute a clue regarding their expansive mental capabilities.

In any event, there appears to be a general correspondence between the number of neurons an animal has in its pallium and its intelligence, says Suzana Herculano-Houzel in her commentary on both new studies for Science. Humans, she says, sit “satisfyingly” atop this comparative chart, having even more neurons there than elephants, despite our much smaller body size. It’s estimated that crow brains have about 1.5 billion neurons. 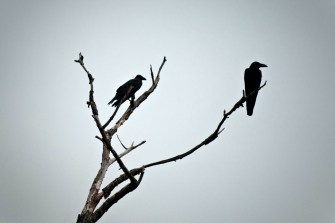 Ozzie and Glenn, crows from the study, not pictured. Credit: narubono/Unsplash

The kind of higher intelligence crows exhibited in the new research is similar to the way we solve problems. We catalog relevant knowledge and then explore different combinations of what we know to arrive at an action or solution.

The researchers, led by neurobiologist Andreas Nieder of the University of Tübingen in Germany, trained two carrion crows (Corvus corone), Ozzie and Glenn.

The crows were trained to watch for a flash — which didn’t always appear — and then peck at a red or blue target to register whether or not a flash of light was seen. Ozzie and Glenn were also taught to understand a changing “rule key” that specified whether red or blue signified the presence of a flash with the other color signifying that no flash occurred.

In each round of a test, after a flash did or didn’t appear, the crows were presented a rule key describing the current meaning of the red and blue targets, after which they pecked their response.

This sequence prevented the crows from simply rehearsing their response on auto-pilot, so to speak. In each test, they had to take the entire process from the top, seeing a flash or no flash, and then figuring out which target to peck.

As all this occurred, the researchers monitored their neuronal activity. When Ozzie or Glenn saw a flash, sensory neurons fired and then stopped as the bird worked out which target to peck. When there was no flash, no firing of the sensory neurons was observed before the crow paused to figure out the correct target.

Nieder’s interpretation of this sequence is that Ozzie or Glenn had to see or not see a flash, deliberately note that there had or hadn’t been a flash — exhibiting self-awareness of what had just been experienced — and then, in a few moments, connect that recollection to their knowledge of the current rule key before pecking the correct target.

During those few moments after the sensory neuron activity had died down, Nieder reported activity among a large population of neurons as the crows put the pieces together preparing to report what they’d seen. Among the busy areas in the crows’ brains during this phase of the sequence was, not surprisingly, the pallium.

Overall, the study may eliminate the layered cerebral cortex as a requirement for higher intelligence. As we learn more about the intelligence of crows, we can at least say with some certainty that it would be wise to avoid angering one.

Psychologists are finding that moral code violations can leave an enduring mark — and may require new types of therapy.
Up Next
Strange Maps

How Napoleon went from ‘cannibal’ to ‘Majesty’ in 20 days

Alexandre Dumas’ famous anecdote about Fake News in the 1800s has a surprising twist.