“Seeing is believing” is not only a metaphor for discerning truth, but also a visual reality for many. Watching someone perform an act opens the door to mimicry, one of the most efficient ways to learn. In group fitness, for example, a majority of students perform exercises more quickly and effectively after watching a visual demonstration over audio cueing.

Yet distinction between our senses is not as clear-cut as we sometimes assume. This becomes apparent in synesthetes, people whose brains “confuse” their senses, so that certain numbers emit smells and flavors are visualized. One possible reason for this is that syesthetes seem to have stronger myelin connections linking their neural networks.

Subtle brain differences are telling, but as Oliver Sacks, who has written extensively on synesthesia, writes in Musicophilia, musicians have particularly revealing neural maps.

Anatomists today would be hard put to identify the brain of a visual artist, a writer, or a mathematician — but they could recognize the brain of a professional musician without a moment’s hesitation.

This begs the question: Do musicians strengthen other sense perceptions due to their acute auditory training? A new study published in the journal, eNuero, on November 21 suggests that this may be the case.

While the public generally only sees the Color Guard during sporting events or at parades, the training is intense. Growing up, my neighbor’s granddaughter was a flag thrower; she would practice for hours in the backyard. Timing was everything. Interestingly, as this study shows, if she were a percussionist or brass player in the band, her visual timing might have been even better.

The researchers team of Denison University professor Nestor Matthews and Brown University professors Leslie Welch and Elena Festa observed 25 percussionists, 67 brass players, and 29 color guard to collectively complete a total of 67,760 temporal order judgment (TOJ) trials. The findings may seem counterintuitive, given how much visual training each guard has to undergo, but it turned out that percussionists exhibited the lowest thresholds. In regard to their sensitivity, the researchers state: 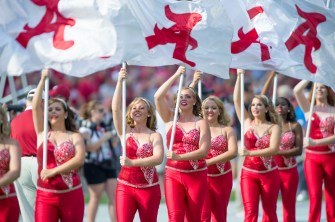 Members of The Alabama Crimson Tide color guard perform before playing against the Florida Atlantic Owls on September 22, 2012. Photo by Michael Chang/Getty Images

Of course, recognizing and responding to sensory input requires communication between seemingly disparate parts of our bodies, many of which operate unconsciously. Proprioception, for example, is the constant relationship your nervous system engages in with your environment; your vestibular system, which allows you to balance and understand spatial orientation, depends on your auditory system (specifically your cochlea). The fact that disruption in ear fluid can make you stumble into walls and even require antibiotics provides an eye-opening example of just how complex our bodies are.

Returning to music, we don’t only use our ears to listen to our favorite songs. Our skin, the body’s largest organ, plays an essential role in hearing music. As Sacks writes in Musicophilia, music is quite a stimulating activity.

Listening to music is not a passive process but intensely active, involving a stream of inferences, hypotheses, expectations, and anticipations (as David Huron and others have explored). We can grasp a new piece — how it is constructed, where it is going, what will come next — with such accuracy that even after a few bars we may be able to hum or sing along with it.

So then it shouldn’t surprise us that banging a drum helps us spin a flag better. Not surprising, perhaps, but still fascinating.

The separation of conjoined twins is fraught with stomach-churning biomedical and ethical challenges.
Up Next
Hard Science

In order to build a second Earth, we need to look at how the first one was made.