Weekends in Los Angeles are dominated by physical activity: hiking, surfing, running, cycling, yoga. It’s easy to affix stereotypes to this city’s denizens, yet year-round sunshine affords residents every opportunity to stay fit. Many take advantage; staying active is part of the culture.

Not that everyone partakes, of course, but lack of opportunity can never be an excuse. Having grown up on the East Coast, I recall when outdoor physical activity was seasonal. You have to work harder during winter months to maintain the same fitness output. Those who endure the ravages of winter to make it to the gym seemed happier for it.

Such speculation was recently put to the test by researchers at Oxford and Yale. In a study of more than 1.2 million Americans, they discovered physical fitness is more important to your mental health than how much money you make. To be exact: exercisers are, on average, depressed 35 days a year; for non-active participants that number is 53 days.

Using data between 2011–2015 provided by the Centers for Disease Control and Prevention Behavioral Risks Surveillance System, researchers found that physically active adults self-report feeling depressed much less than couch potatoes. They point to the fact that exercise is correlated with numerous health benefits, including reduced risk of overall mortality, cardiovascular disease, obesity, stroke, and cancer.

If you feel good, your perspective tends to follow.

It’s not only the diseases you avoid. Exercise is linked with improved musculoskeletal health and stress regulation. Studies centered on mental health have been a bit more ambiguous, though it has long been known that exercise helps curb anxiety and depression. For this study, researchers note that intervention has never been more needed considering that “depression is now the leading cause of global disability burden.”

Reducing this burden is the main goal of this research. Thinking outside of the gym, they included 75 types of physical activity in the survey, including golf and gardening. They grouped “mindful exercises,” such as yoga and tai chi together—a slightly strange decision, given that even those two disciplines leave distinct imprints on your nervous system. Still, the underlying goal is to better understand the difference between movement versus no movement. The former made a statistically significant impact.

While movement scores above money, the results were actually U-shaped. Three to five weekly sessions of thirty minutes to an hour appears to be the magic zone for achieving optimal mental health. Those working out three or more hours a day did not show better results than those who don’t work out at all. There are likely two reasons for this: fatigue, which can drain your emotional output, and obsessive-compulsive disorder, a real problem in gyms. For example, some former addicts devote themselves to the “high” of working out, but really only move their addiction to another focus. Healthier, sure, but incessant anxiety about working out still follows. 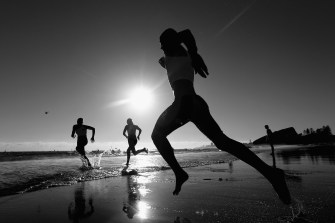 Competitors warms up prior to the start of day one of the 2013 Australian National Surf Lifesaving Titles on April 17, 2013 in Gold Coast, Australia. Photo credit: Chris Hyde / Getty Images)

Team sports and cycling proved to be associated with the lowest mental health burden; the “mindful exercises” scored higher on the satisfaction index than walking.

The researchers note that while they believe these results are causal, more research is needed to prove direct links between specific exercises and mental health. Still, they feel comfortable stating the difference between working out and not working out is the same as “between individuals with a difference in household income of more than U.S. $25,000.”

Point being: making more money is not necessarily the road to satisfaction. Regular movement is. This makes sense, given that for most of history, survival required physical output more than monetary exchange. There is measurable progress made in building shelter or hunting food; watching a number increase on a screen does not offer the same biological rewards, regardless of how happy we believe money will make us. Another recent study points out that the highest increase in depression and anxiety in recent years has been in the wealthiest demographic.

A rather old lesson, yet one we seem to keep forgetting. The chemistry of satisfaction and self-assurance relies on blood flow, not cash flow. Money is helpful. Movement is necessary.

Should teachers be fired for nude pics from their past?

Lauren Miranda sent a nude selfie to a boyfriend years ago. Somehow one of her students discovered it.