A new study by an international team of researchers suggests that there are at least four distinct forms of Alzheimer’s disease, each of which attacks a different part of the brain. The findings, published in Nature Medicine, may be the foundation for a new understanding of a disease which is expected to affect millions of people in the coming decades.

The leading hypothesis on the mechanism of Alzheimer’s is that the disease is caused by unusual aggregation and spread of the tau protein in the brain. While there is still debate over if the strange behavior of these proteins is the cause of Alzheimer’s or merely a symptom of the disease, the spread of such proteins can be used to identify the condition.

The authors reviewed the positron emission tomography (PET) data of 1,143 people. The PET images allowed the scientists to view where in the brain tau proteins were building up. An algorithm was applied to this data which was able to categorize the patterns in the images. In those brains with tau protein abnormalities, there were four distinct variations in how they manifested in the brain as seen below: 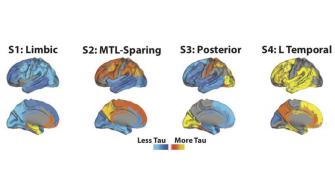 The four different Alzheimer’s subtypes identified by the study. Areas in warmer colors had higher concentrations of tau proteins. The progression of the disease was related to the region of the brain that was most impacted. Image: Jacob Vogel

This could mean that there are four subtypes of Alzheimer’s, each with different affected areas of the brain, symptoms, and prognoses. The authors described them as follows:

Type one is characterized by the tau protein spreading within the temporal lobe, impacting memory. This type was observed in 33% of Alzheimer’s cases.

Type two is the inverse of type one in many ways. The tau protein spreads primarily in the cerebral cortex rather than in the temporal lobe. Patients with this variation have fewer memory problems than those with type one but more difficulties with planning and performing actions. This type appeared in 18% of cases.

Type three targets the visual cortex, the part of the brain that processes visual information. Those with this variant had particular difficulty with orientation, movement, and processing sensory information. This type occurred in 30% of cases.

Type four features the protein spreading in the left hemisphere of the brain and seems to principally affect language ability. This manifested in the remaining 19% of cases.

Beyond the differences in symptoms and pathology, the prognosis of each subtype appears to differ. After reviewing the long-term data of the patients, it appears that people with the third subtype have the slowest rate of mental decline, while those with the fourth endured a much steeper rate of facility loss.

Study co-author Oskar Hansson of Lund University in Sweden, commented on the findings in a press release:

“We identified four clear patterns of tau pathology that became distinct over time. The prevalence of the subgroups varied between 18 and 30 percent, which means that all these variants of Alzheimer’s are actually quite common and no single one dominates as we previously thought. The varied and large databases of tau-PET that exist today, along with newly developed methods for machine learning that can be applied to large amounts of data, made it possible for us to discover and characterize these four subtypes of Alzheimer’s. However, we need a longer follow-up study over five to ten years to be able to confirm the four patterns with even greater accuracy.”

If the authors are correct, a more accurate Alzheimer’s diagnosis may help provide specialized treatment to future patients.

Creativity and achievement require balancing hard work with the restful power of calm.
Up Next
The Past

The mummy was first thought to be a male priest. But a recent radiological analysis revealed a surprising anomaly.