The bar to entry to becoming an Uber driver is relatively low: You have to be 21 years old; you have to have driven for at least a year; a license and social security number are necessary. While a background check is required, nothing about actual driving skills or spatial comprehension are noted. Even basic questions about passenger safety are omitted, such as “Will you be driving with your phone in your hand?”

Not so in London. Becoming a taxi driver takes three to four year of study in order to master what the government calls “the Knowledge.” Drivers fail roughly eleven times before getting their license; only half of applicants are ever certified. There are 320 routes within a six-mile radius of Charing Cross alone, and that’s only recommended as a starting point. It makes sense that British cabbies want Uber out of the city.

In a famous study of London taxi drivers, researchers discovered they exhibit enlarged gray-matter volume in their hippocampus, our brain’s internal GPS. This region is responsible for spatial memory and navigation. (It should be noted that knowledge of streets does not translate into all forms of memory.)

The infamous car ride in “European Vacation,” aka the Griswold’s rollercoaster turnabout ride—”Look kids, Big Ben! Parliament!”—might have greatly annoyed the family, but Clark’s hippocampus was landmarking the buildings loop by loop. It was a drive he’ll likely never forget.

Clark’s existential dilemma was lane switching. For many of us, it’s simply getting anywhere, a problem GPS is supposed to solve. Indeed, traveling with Waze makes commuting easier than ever. But at what cost?

Journalist M.R. O’Connor believes that consumers could be on the wrong end of the bargain. The author of Wayfinding, a book about how we navigate our environments, argues that being led by an app makes you oblivious to landmarks, which might have negative effects in long-term cognitive health.

This Is Your Brain on GPS

This is your brain on GPS

O’Connor cites a follow-up study (of sorts) in London. Participants guided by GPS showed less activity in their hippocampus than those using landmarks to find their way—that is, figuring it out for themselves.

The beauty of problem-solving challenges is that they translate across domains. Creating more neural circuits in your hippocampus not only benefits spatial orientation, it could keep Alzheimer’s disease at bay, as that is the first brain region to suffer damage. The initial signs of dementia are short-term memory loss and disorientation, both of which have to do with spatial orientation in some capacity.

It comes down to new experiences combined with a vigilance to learn. As O’Connor writes, we peak in navigation aptitude at around age 19, defaulting to habit as we grow older.

Take the same route to work every day? One simple way of strengthening your hippocampus is to constantly experiment with new routes (i.e. get lost). What you lose in time you gain in cognitive health over the long-term, including potentially staving off depression and anxiety, mental health conditions that are in part affected by neurogenesis in your hippocampal circuit.

Landmarking is an ancient animal skill. We cringe when watching Saharan elephants discover their watering holes barren; we gaze in awe at the annual flamingo mixer in Kenya. Animals are tied to place for survival. GPS, O’Connor argues, is ruining our sense of topophilia, “love of place,” a concept that Rebecca Solnit honors in her meditation on walking, Wanderlust, when she describes promenades as “not a way of getting anywhere, but a way of being somewhere.” Such a feeling can occur in new destinations provided that you’re looking up from your phone. 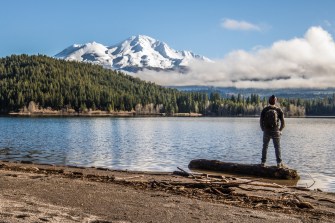 Photo by Brenan Greene on Unsplash

Our relationship to automobiles is certainly different. Utilitarian constructions, they’re designed to get us from A to B with as little friction as possible. Whether walking or driving, navigating our environment is essential to our sense of place, a skill suffering a thousand tiny cuts by our reliance on technology. Our ancestors would never have survived had they not landmarked properly. All conveniences come at a price.

Of course, there are advantages to GPS. Sometimes getting lost sucks. I’ve found myself completely flustered in two regular haunts—Joshua Tree and Anthony Wayne State Park—walking in circles for hours. And just try to use an app in a city like Lisbon, with its serpentine cobblestone alleys, as confusing a landmark as Saramago’s book-length sentences (and as gorgeous).

As frustrating as spatial disorientation is, the trade-off is worth it: You learn a new route. Problem solving, critical thinking, exteroception—skills all strengthened when environmental uncertainty abounds. As Peter C. Whybrow writes in The Well-Tuned Brain:

“The human brain sustains high performance by continuous vigilance and interaction with the real world, not by Web surfing and outsourcing.”

There are two practices I’ve implemented to counter my reliance on GPS, having lived in Los Angeles for eight years:

Learning keeps you curious. As Whybrow suggests, outsourcing every struggle is unhelpful. We need to be challenged on a daily basis for optimal health. Just as hormesis ultimately strengthens our body, getting lost aids our brains. A bit of friction makes us stronger animals.

Perfectionism is on the rise, and its consequences for mental health can be devastating. The Japanese philosophy of “wabi sabi” can help.
Up Next
Starts With A Bang

Does Particle Physics Have A Future On Earth?

If we don’t push the frontiers of physics, we’ll never learn what lies beyond our current understanding.At a fundamental level, what is our Universe made of? This question has driven […]