In 1950, two-thirds of us lived in rural settings, with just one-third living in cities. That balance is rapidly shifting, and experts now expect that by 2050 the numbers will be turned all the way around. As this transition occurs, scientists are racing to understand the impact such urbanization will have on us. An unusually thorough study has just been published in PNAS that suggests growing up surrounded by vegetation dramatically reduces the odds of acquiring a mental disorder as an adult. The implication is that we’d better start making sure that our burgeoning urban centers provide ample green spaces in which children can play and enjoy growing up. Lead author of the study, Kristine Engemann of Aarhus University, says, “With our dataset, we show that the risk of developing a mental disorder decreases incrementally the longer you have been surrounded by green space from birth and up to the age of 10. Green space throughout childhood is therefore extremely important.” 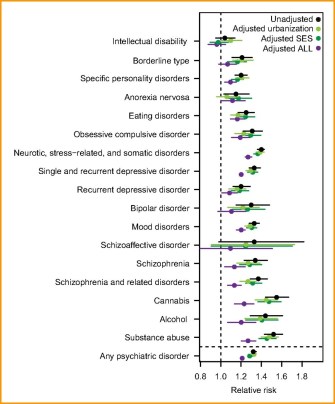 What’s unusual about this study

The study looked at 16 mental disorders. There’s been a sense from earlier studies that growing up in purely concrete and steel environments may lead to mood disorders, schizophrenia, and cognitive impairment, but there are other well-documented factors that can lead to these disorders as well, including socioeconomic status, family history, and urbanization itself. The problem in assessing the specific impact of green spaces has been devising a research methodology that can factor out these other influences. This new study achieves that by cleverly leveraging a large data set: The Danish Civil Registration System.

It’s a system in Denmark that assigns each individual a personal identification number, or PIN. That PIN identifies each person in an assortment of national databases. This allowed researchers to track individuals’ residences, income, work history, education, and mental health records. Parents’ lives were also analyzed to derive a complete picture of their kids’ home life. The study examined the life stories of a million Danes in all. As Engemann tells NPR, “It’s an incredibly rich source of data.”

Engemann and her colleagues combined this information with detailed satellite imagery going back as far as 1985, and were thus able to track each individual’s exposure to vegetation from childhood onward. Cross-referencing this knowledge with the incidence of the studied mental disorders and taking into account the influence of other known factors allowed them to arrive at their conclusions. 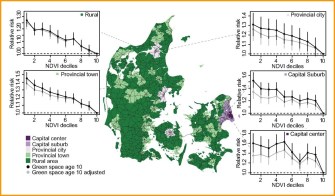 What the data and imagery revealed

While not all of the disorders seemed to have been significantly impacted by exposure to green spaces — learning disabilities, for example, were apparently unaffected by it — others were strongly correlated to a lack of greenery such as alcoholism. Overall, growing up in a green environment lowered the chances of acquiring a disorder by anywhere from 15% to 55%.

These are not insignificant numbers when considering disorder triggers. “Green space,” says Engemann, “seemed to have an association that was similar in strength to other known influences on mental health, like history of mental health disorders in the family, or socioeconomic status.” NPR asked neurologist Kelly Lambert for her take on the study. “The effect is remarkable. If we were talking about a new medicine that had this kind of effect the buzz would be huge, but these results suggest that being able to go for a walk in the park as a kid is just as impactful.”

Correlation, of course, is not causation, and the study notes that it’s “generally hard to infer from observational studies and is difficult to prove when the etiology of psychiatric disorders is unknown.”

The study’s analysis also can’t reveal what mechanisms might link greenery to mental health. Satellite imagery offers “no information about other aspects of natural environments such as blue space, biodiversity, the presence of animals, or quality of vegetation,” says the study, nor does it say much about the way in which green space is used in general. Do areas of vegetation lead to greater socialization, more exercise? The authors suggest that looking forward, “Tracking people’s use of green space through GPS or possibly through social media could provide more information about pathways related to use of green space.”

Jens-Christian Svenning, a co-author of the study, concludes, “The coupling between mental health and access to green space in your local area is something that should be considered even more in urban planning to ensure greener and healthier cities and improve mental health of urban residents in the future.”

Living at a higher elevation is a double-edged sword.
Up Next
Neuropsych

Like sneaking veggies into dessert, these board games teach STEM, strategy, and executive functions through the joys of play.