When John Hopkins professor Roland Griffiths and NYU professor Stephen Ross brought a unique study on psilocybin’s efficacy in treating cancer patients’ existential distress to the FDA, they were surprised when the government agency asked them to expand their focus and ambition. Recognizing that SSRIs are not working in treating mental health disorders, the FDA was willing to explore other avenues — even a Schedule 1 drug like “magic mushrooms.”

When Michael Pollan contacted the FDA while reporting for his book on psychedelics, How to Change Your Mind, the agency refused to confirm or deny this account due to its longstanding practice of not discussing substances under regulatory review. Still, this marks an important advancement in our broader understanding of the potential benefits of psychedelics.

Let’s face it: until the twentieth century, these substances, predominantly used in ritual for all of recorded history (and likely longer), were generally not viewed as dangerous. In fact, it has been long been argued that they’re necessary for personal and societal therapy.

Even more modern incarnations, such as LSD and MDMA, affect the same (or similar) serotonin circuits as psilocybin and DMT. Sanctioned drugs, such as alcohol, cigarettes, and sugar, have proven far more damaging to our health than the class of substances known as psychedelics.

MDMA is not always broadly considered a psychedelic, given that it does not provoke the same hallucinations or altered consciousness as other “trips.” Yet MDMA binds to the same serotonin-2a receptor (the “mystical experience” receptor) as LSD and psilocybin, as well as dopamine receptors, accounting for the intense euphoria.

All of these substances have been used recently in addiction treatment. As Pollan notes, MDMA specifically was being used to treat alcoholism back in the fifties and sixties, before sanctioned studies were commissioned. It was only due to Nixon’s racist profiling that these class of drugs were deemed Schedule 1.

Now that the first study on MDMA’s role in treating alcoholism is complete, it turns out that the longstanding anecdotal evidence might bear fruit. Led by Ben Sessa, a senior research fellow at Imperial College London, the team studied seven volunteers during an eight-week MDMA-assisted psychotherapy course to see if it would help curb their alcoholism. This preliminary paper focuses on four volunteers who have completed the course.

While this is an extremely small sample size, it does open the door for further studies, which is the general aim of such research. Given the tenuous nature of psychedelic research due to the drugs’ illegality, governments (and the public) have to be brought in slowly, even as advocates can vouch for their value.

Simply put, we need better interventions. As the team notes, 6 percent of men and 2 percent of women in England are alcohol-dependent; a quarter of the population has an abusive relationship to alcohol. As a depressant, alcohol also heavily influences mental and emotional health. It is often a chicken-and-egg scenario in regards to mental health and alcoholism, but one thing is certain: drinking doesn’t help. 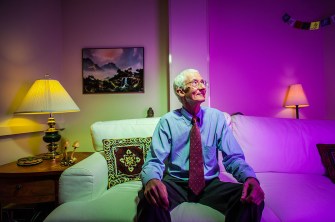 Roland R. Griffiths, Ph.D., is a professor in the departments of Psychiatry and Neuroscience at Johns Hopkins University School of Medicine. He studies the effects of psychoactive drugs on the mind in his lab which is set up to look like a living room.

Photo by Andre Chung for The Washington Post via Getty Images

The total cost of alcohol-related problems in England, ranging from health disorders and domestic problems to crime and accidents, is £20 billion. Current treatment methods are insubstantial. Relapse rates there are 60 percent after one year, jumping to 80 percent after three years.

For this study, the patients received ten therapeutic sessions. Eight were non-drug psychotherapy sessions. The other two, administered during weeks three and six, included 125 mg doses of MDMA (with an optional 62.5 mg “booster” dose after two hours).

None of the volunteers experienced adverse effects during or after the course, nor did they return to drinking. Importantly, none felt any craving for MDMA after the study’s conclusion. As one participant commented, the drug itself was more a mediator than anything:

It’s not about the drinking, the MDMA healed me inside and the drinking looks after itself … I’m seeing things anew, nature for the first time … I’m in control of my decisions, I’ve got control back … Life is just good!

Comments from other participants include the feeling of a “weight being lifted off my shoulders” and “being under MDMA was beautiful. It showed me the real me; the me without alcohol.”

Now the team is calling for twenty volunteers with alcohol dependency in order to conduct another study. Separating the actual efficacy of psychedelics and its sordid legal status and past fear-mongering will take time, but hopefully not too much. Earlier this year, ketamine became the first FDA-approved psychedelic to be legally prescribed.

The Multidisciplinary Association for Psychedelic Studies (MAPS) has trained its sights on legal MDMA by 2021. Given the emerging science on the topic, such a goal is within reach. That’s good news for addicts that feel their time is running out.

Or why I’m coming out as an impatient optimist.
Up Next
Smart Skills

The term “self-actualization” is often bandied about on the web, but how does one go about becoming self-actualized really?