Don’t you wish you could predict your child’s behavior with 100 percent accuracy? Any realistic parent knows it’s an impossible daydream, but an appealing one nonetheless. Kids will always surprise you. There are so many factors that go into behavior, not to mention the fact that internal and external forces can sometimes make kids act out of character.

The first is the sensorimotor stage. This takes places between birth and two-years. A child at this stage is getting used to experiencing the environment through their senses. Through trial and error and from experiences with objects and sensations, they begin to master the world around them. Around age one, the child learns object permanence, the concept that an object continues to exist, even when it’s left the field of vision.

According to Sarah Lytle, PhD., from the Institute for Learning & Brain Sciences at the University of Washington in Seattle, what many parents don’t fully realize is that babies are also developing socially and emotionally. As such, they usually look to their parent for support. If you’ve ever engaged with a baby you didn’t know, you’ll notice the child usually turns to their parent to gauge how to respond. This act is called social referencing or social cognition. Be sure to be supportive when the child does this. This allows for more confidence and independence. 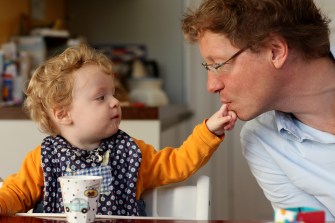 Young children understand the world through interaction with their senses. Getty Images.

A child’s first word is uttered around six months of age. To help a baby develop language skills further, remember that they follow your gaze. Emphasize with your eyes by moving them slowly when introducing a new word. According to Dr. Lytle, it’s okay to use a baby-talk tone. We’re actually genetically programmed to talk that way. But make sure you use words correctly, in full, and in complete, grammatically correct sentences.

From age two to six or seven, a child enters the preoperational stage. Here, language skills ramp up. The child can start to think in terms of symbols, develop a numerical understanding, and begin to grasp the distinction between past and future. Children at this age do well with concrete situations. Abstract concepts, however, are difficult to grasp.

It’s at age two that humans become amazed by the idea that others don’t see the world quite like they do. As the parents of two-year olds are all too well aware of, this self-centered viewpoint makes it difficult for the child to share and care about others. Although a 2016 poll showed that most parents think two-year olds can control their emotions, psychologists say quite the contrary. Having a toy that they love on hand to distract them when they pull a temper tantrum is probably the best strategy. 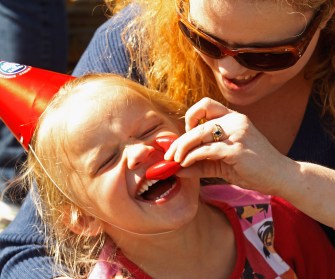 To help build empathy, parents can work at developing a child’s theory of mind. This is coming to understand the perspective of others. Note this doesn’t develop until the child is three or four. One famous example is the “Sally-Anne test.“

Here, a child is told that Sally has a basket and Anne a box. Sally puts an object in her basket, then goes for a walk. Anne takes the object and puts it in her box. The child is asked, “Once Sally returns, where will she look for the object?” If the child understands Sally’s point of view, they will say, “In the basket.” Another tactic it to read them stories where they have to put themselves in a character’s shoes.

From age six or seven to 11 or 12, a child enters the concrete operations stage. Seven is supposed to be the age of reason. Here, he or she can grasp abstract concepts, understand sequences of events, and empathize with others whose experiences are different from their own. Children at this stage can learn abstract mathematical concepts, but they aren’t good at breaking down complex problems which require systematic reasoning. Lytle suggests keeping in mind a child’s emotional development at this stage. Parents often don’t realize how affected their children are by marital spats or a parent suffering something like a bout of depression.

From age 12 throughout the teen years, the child enters the formal operations stage, where he or she develops greater capacities for hypothetical thinking, abstract reasoning, and deductive reasoning. Generally, people have a good grasp of these by age 15. Moral issues like social justice and abstract ideas, such as probabilities, can be understood. Although for parents, few stages can be quite as challenging. 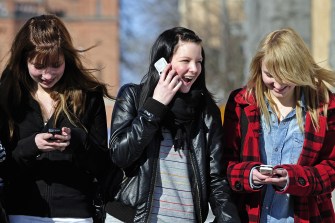 Dealing with teens is challenging because of how their brains work. Getty Images.

Teens are often moody and hypersensitive. This is usually chalked up to hormones, but it’s also because their midbrain is highly active in this stage. The brain develops from back to front.

The midbrain is responsible for memory, emotion, and sexuality. It may surprise you to know that the rational part of the brain, the prefrontal cortex, isn’t fully developed until around age 25. This is responsible for things like decision-making, planning, impulse control, and risk avoidance.

Teens are more likely to evaluate situations with their amygdala or emotional center. This is why they tend to get overwhelmed by their emotions, but might have a hard time expressing them. It also explains their intermittent bend toward risky behavior. Make sure to talk to them often about drugs and alcohol, the risks of unprotected sex, and so on, and give them vocabulary they can use to avoid social pressures. When a teen does make a mistake, instead of scolding or lecturing, use it as a teachable moment. Walk them through it logically. Find out in their own words what they should have done differently. This can help them develop decision-making skills.

Also, work on giving them frontal lobe tasks or doing it with them. Give them opportunities to practice problem-solving, make judgment calls, or to plan things out. Do it together or debrief once they’ve completed the task. Sure, raising kids is far from easy, but knowing a little neuroscience can make a real difference.

Do children develop a moral compass earlier than we think? See what one expert thinks here:

We also don’t know how Tylenol works. But it does work.
Up Next
Technology & Innovation

Spontaneous talk on surprise topics. Author Salman Rushdie on the secret life of cities and so much more.