With the subscription box market on the rise, just about anything you could possibly need can be delivered to your home monthly. Thanks to Creation Crate, that list now includes fun and educational hands-on projects. Creation Crate’s subscription sends you all the components you will need plus access to online courses that include instructions, step-by-step videos, and exercises to challenge your new skills. The curriculum is designed to take your skills from beginner to tech wizard. Unlike other subscription boxes, Creation Crate doesn’t send you a random project every month. Each project becomes progressively more challenging as you learn new components and commands (C++ language). For as little as $29.99/month, subscribers ages 12 and up can learn about coding and electronics and have fun doing it. 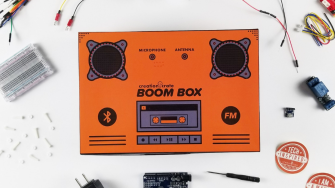 By now you’re probably familiar with STEM. Learning institutions, students, and parents around the world are being educated about the ways that science, technology, engineering, and mathematics can enrich the lives of young people and better prepare them for the future. In addition to hitting all four of those key academic principles, Creation Crate projects are prime hands-on learning tools that, neurologically speaking, come with many added benefits. The curriculum has a 15x higher retention rate than passive learning techniques and has a 3x higher course completion rate than e-learning platforms without hands-on projects.

Before exploring a few of the neuroperks, let’s take a peek at some of the cool electronic projects that Creation Crate subscribers can look forward to.

The first project to arrive teaches about microcontrollers and basic C++ coding. Users have the opportunity to write code in the Arduino language that changes the mood of the lamp by changing the color of the LEDs. Lessons learned from this kit set the foundation for future months and future projects.

A bit further along on the curriculum in the Project 8 slot is an audio visualizer with smart LEDs that react to the volume of music. The kit introduces specialized components and goes slightly beyond the basic Arduino IDE experience with the use of downloaded external libraries.

Once you learn the curriculum basics, you’ll be ready to take on one of the Challenger projects! Learn how to build and program an obstacle-avoiding rover bot.

To learn more about the curriculum, head over to the Creation Crate website.

The neuroscience of working with your hands

Part of Creation Crate’s mission statement is to “inspire your curiosity and help you realize your potential, as you solve real world problems with hands-on projects. Whether you’re an adult interested in learning something new, a parent preparing your child for the jobs of tomorrow, or a teacher engaging your students with hands-on experiences—Creation Crate is the perfect challenge.” While the actual projects are designed to be educational and challenging, the act of completing them is also an important part of the package.

“In many situations, when we allow our bodies to become part of the learning process, we understand better,” says Professor Sian Beilock. “Reading about a concept in a textbook or even seeing a demonstration in class is not the same as physically experiencing what you are learning about.”

When it comes to working and building with your hands, research shows that the benefits extend much further than our fingertips. According to University of Richmond neuroscientist Kelly Lambert, it can affect the brain the same way that some drugs can. Lambert coined the term ” behavior-ceuticals” to refer to the way that hand-related tasks can alter the neurochemistry of the brain. Referencing 19th-century medicine, she told CBS News that doctors used to prescribe knitting to women as a cure for their anxiety. “They sensed that it calmed them down some,” she said, adding that the repetitive physical motion was relaxing because of the neurochemicals it increased. 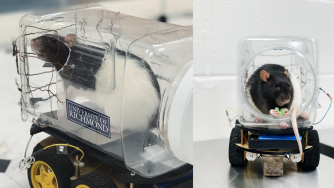 In a recent study, Lambert and her colleagues trained two groups of rats to drive tiny cars with their front paws. They found that rats housed in “enriched environments” with ladders, toys, and balls were better at driving in pursuit of a sweet reward than rats who were housed in standard cages without the added stimuli.

The study also found that both groups of rats secreted higher levels of dehydroepiandrosterone (DHEA) and corticosterone, hormones that control stress responses. By learning to use their rat hands to solve a problem (in this case: finding a reward), the subjects were able to chemically boost their emotional toughness. “It is likely that driving gives the rats a sense of control over their environment,” Lambert said. “In humans, we would say that it enhances a sense of agency or self-efficacy.” Rat brains and human brains are similar in many ways, which is why the increased emotional resilience is important and promising for mental health studies. “Anything that reduces stress can build resilience against the onset of mental illness,” Lambert added.

Maybe the most obvious benefit of a hands-on approach to learning is that it can improve motor skills, but that’s only part of the story. Researchers at the University of Basel’s Biozentrum recently discovered that even relatively simple tasks, like grasping, change how certain neurons in the red nucleus section of the midbrain connect.

“When learning new fine motor skills, the coordination of this specific movement is optimized and stored in the brain as a code,” explained the head of the research group, Professor Kelly R. Tan. As the motion is practiced and performed over and over, the connection between the neurons becomes stronger. The next step, according to Tan’s team, is to see how that connection holds up when the learned motor skill is not practiced. The assumption seems to be that when the grasping stops, those connections will weaken. 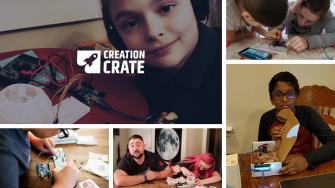 We can now physically see what hands-on activities do to the brain. For a University of Chicago-led study published in 2015 in the journal Psychological Science, physics students were made to participate in momentum experiments involving spinning wheels and laser pointers. One group of students participated by observing while the other group led the experiments. In a test given afterwards, the observers scored lower than the students who got to interact with the objects.

The researchers also took MRI scans of the students to see which sections of their brains were activated while they looked at spinning wheel animations and thought about angular momentum and torque. “When students have a physical experience moving the wheels, they are more likely to activate sensory and motor areas of the brain when they are later thinking about the science concepts they learned about,” said study co-author Professor Sian Beilock. “These sensory and motor-related brain areas are known to be important for our ability to make sense of forces, angles and trajectories.”

For Beilock, the study reinforced the idea that, especially when it comes to STEM subjects, hand-on is better. “In many situations, when we allow our bodies to become part of the learning process, we understand better,” she said. “Reading about a concept in a textbook or even seeing a demonstration in class is not the same as physically experiencing what you are learning about. We need to rethink how we are teaching math and science because our actions matter for how and what we learn.”

Creativity and achievement require balancing hard work with the restful power of calm.
The Well

Darwin, Descartes, and Maxwell all believed in these science ‘demons.’
▸
7 min
—
with
Jimena Canales
Neuropsych

One tiny change might have made a huge difference.
Up Next
Neuropsych

Here’s how good liars get away with it

Those who think they’re better at lying than average seem to have a few things in common.