By now these scenes have become inevitable: A group of toddlers at the restaurant table, eyes glued at screen, volume on loud, parents oblivious that others are trying to enjoy an evening out. Another: Parent pushing stroller down the street with one hand, their other holding a phone, where their attention actually goes. The tools “connecting the world” once again keeping those in close proximity from connecting to one another.

Perhaps a new study from Rutgers University, published in the Journal of Developmental & Behavioral Pediatrics, will help correct the expectable response from such parents, that “it’s the only way I can get them to quiet down.” It begins, as our greatest narratives do, by turning open the pages of a book.

According to the study, led by Rutgers Robert Wood Johnson Medical School assistant professor Manual Jimenez, parents that regularly read to their toddlers are not only less harsh overall, the children are also less likely to be disruptive or hyperactive. Better kids, better adults: A win-win.

These findings are part of a long line of research on the necessity of parental interactions with their offspring. As 80 percent of brain growth occurs during the first three years of life, with an average of 700 synapses forming per second, babies that hear more from their parents learn more words by age two. By contrast, babies that are spoken to less display learning disabilities for the next six years.

Importance of Reading to Babies

The importance of reading to babies

While there is evidence that communicating with babies inside the womb might make a difference (up to ten weeks before birth), they’re paying attention to the sounds parents make from day one. Babies that are talked to more develop their own vocabulary much quicker. Babbling sounds are not random; it’s their way of trying to mimic their parents by shaping their mouths in an attempt to match the sounds they hear, another skill quickly acquired the more parents talk.

Even the sing-song “motherese” parents (but especially mothers) serves an important purpose: By stretching out syllables in a melodic way, the baby’s attention is held longer. The infant is able to tune in to the pitches and identify syllables more easily, creating the building blocks of language.

As research has shown, adults that read are more intelligent and empathetic. If this skill helps make better humans, it makes sense that infants that are read to would be less anxious and more in tune with their surroundings. It’s also understandable that parents that read to their kids would be less harsh to them, given that reactive parenting involves an emotional regulation deficit. 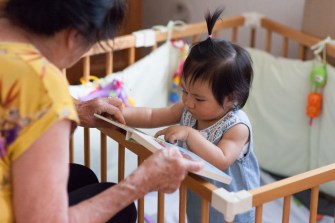 Photo by: BSIP/UIG via Getty Images

For this study, Jimenez and team reviewed 2,165 mother-child pairs from across the United States. Mothers were interviewed once regarding their reading habits with their children (ages 1-3). A follow-up interview was conducted two years later.

The more the parents read, the less harsh they were to their children, while the children were less disruptive, regardless of the age range cited above. Jimenez notes that this research could help parents and caregivers in impoverished and underserved neighborhoods forge better relationships to their children, while also setting them up for future success. As he explains:

“For parents, the simple routine of reading with your child on a daily basis provides not just academic but emotional benefits that can help bolster the child’s success in school and beyond.”

As previous research has noted, parents in poorer neighborhoods tend to speak less to their babies, and when they do, they tend to talk more in commands (“Put that down!”) than conversationally. The Rutgers crew hopes this research can reach these areas to provide an easy-to-implement strategy that will benefit both adult and child. Of course, regardless of where you live, this bond benefits your entire family.

The English writer left behind a mind-expanding collection of books.
Thinking

Jokes so cheesy even French philosophers will love them.
High Culture

Kurt Vonnegut on the 8 “shapes” of stories

The American author said he attempted to bring scientific thinking to literary criticism, but received “very little gratitude for this.”
High Culture

Yukio Mishima treated his life as if it were a story — one with a surprising and deadly final act.
Surprising Science

A female boar’s intelligence, resolve, and empathy stun researchers.
Up Next
The Present

Public opinion study in Europe shows drop in anti-immigration sentiment, among other changes

Despite the negative rhetoric, Europeans are getting more liberal about immigration.