Within the United States, the amount of workers who have been doing some or all of their work from home has been slowly rising over the years. In 2003, 19.6 percent of people were considered remote workers. Fast-forward to 2015 and that number was 24.1 percent.

This was slowly becoming the norm across the world, with data collected from Eurofound in 2010 stating that one-fifth of workers across Europe were mainly working from home, on a clients’ premises, or on job sites.

A 2019 study of over 1200 full-time workers within the United States between the ages of 22-65 showed that 62 percent of people were “remote workers,” while 38 percent were “on-site” workers, working in either an office or job site location.

Although 2020 began like any other year with similar working-from-home numbers, the global COVID-19 pandemic saw even more people being forced to telecommute, and working from home became the norm. 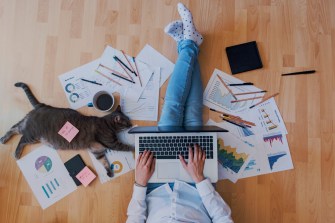 Working at home presents different challenges than working in the office, and with remote working becoming the norm, we need to create a new kind of work-life balance to prevent burnout.Photo by Creative Lab on Shutterstock

While there are many benefits to working from home (40.1 percent of survey respondents say they did feel more productive while working from home), there are also things we need to be conscious of with this new remote work normality.

You may actually be working more hours at home than you do at work.

While this may not seem like a big change at first, over time it can become detrimental to your mental health and your productivity. According to new data, employee survey comments surrounding “burnout” have doubled from 2.7 percent in March to 5.4 percent in April.

Your eating and exercise habits may become worse while you’re working from home.

Along with potential burnout, picking up bad habits while working from home is another thing to be wary of. According to the Bluejeans survey, 39 percent of people are reaching for salty snacks over healthy ones. Additionally, nearly 50 percent of respondents say they have not been able to exercise regularly since they switched from office to remote working.

Distractions can cut your productivity.

The hustle and bustle of home life can also take a toll on your productivity. Taking care of kids (27.6 percent), scrolling through social media (26.5 percent) and checking on the news (26.1 percent), along with getting distracted by streaming services and television shows (9.7 percent) are among the most commonly reported distractions that remote workers face, cutting into their productivity during working hours. 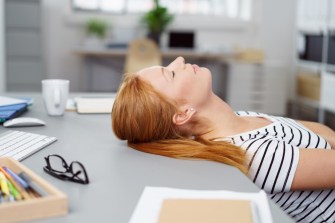 Taking breaks throughout the work-from-home day (even as little as 10 minutes) can allow you to become more productive during working hours. Photo by stockfour on Shutterstock

This shift in remote working has proven many jobs are capable of being done at home, and several outlets are reporting that telecommuting will likely continue for quite some time, even after the pandemic.

While there are many benefits from remote working (such as lower fuel emissions, less waste, more productivity in some instances along with containing the spread of the COVID-19 virus), there are also some changes that need to be made if this is going to continue longer term.

Separate your home and work responsibilities.

Between scrolling through social media, checking the news, and taking care of your children, you may be feeling the pressure to crack down more than the usual to slow down, but new research shows just how important it is to take breaks while working from home.

This article explains: “Work and home are two separate places for a reason. Both require our attention and effort but in different ways. Completing work assignments and fulfilling personal responsibilities are both important things we do every day and having these two worlds physically separate helps us channel our energy the proper way at the proper time.”

Removing that separation, although necessary and even beneficial in some instances, can cause us to become overwhelmed.

Take regular breaks from work, even just for 10 minutes.

When there is a lack of separation in our home and work lives, it can lead to a feeling of “always being on”—which is how burnout happens. Taking breaks throughout the day and “signing off” for period of home-time allows us to be productive at work and recharge during the restful periods. Even a break as short as 10 minutes can help increase your productivity and keep you from burning out.

Perhaps the solution is working less days per week at home.

According to this 2019 study, a 4-day workweek can improve worker’s productivity by up to 40 percent. In a 2018 survey in New Zealand, a trust management company explained they saw a 20 percent gain in employee productivity and a 45 percent increase in employee work-life balance after testing out the 4-day work week.

What if education were engaging for every student?

OpenStax reimagined textbooks and saved students $1 billion. Now is a moment to reimagine even more. How can education help students learn more, better, and faster?