One of the traditional staples of a performing comic’s repertoire are impersonations. In the recent film, All About Nina, in fact, a competitive audition for a network comedy gig pits comedians against each other based on their facility for mimicry. The ability to capture another’s expression is a subtle art, and as far as we knew prior to a new study, only humans and to some degree apes and dogs — the latter spend lots of time around us, after all — can do it.

However, new research published in Nature on March 21, has shined a light that sun bears have this talent too. Since they’re notoriously lone-wolf creatures, the implication is that theirs is an innate facility. What this suggests, then, is that mimicry likely to be a not-uncommon mammalian thing. 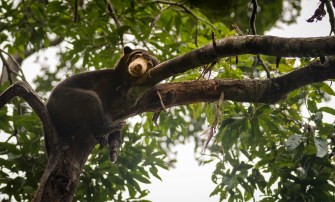 Sun bears — Helarctos malayanus — get their name from the golden chest patch reminiscent of a rising sun. They’re also called “Malayan sun bears,” “dog bears” due to their short snouts and stocky shape, and “honey bears” because they love the stuff. Sun bears are omnivorous and prefer to dine, and be, alone.

Living in the dense lowland forests of southeastern Asia, their shyness means there’s a lot that’s not known about them. A sun bear’s about half the size of a black bear, which likely makes it easier for them to propel themselves up into the forest canopies they frequent.

They’re also obviously smart, even beyond the facial mimicry, since they construct sleeping platforms overhead out of branches and leaves. Mother sun bears, says National Geographic, have also been seen walking upright carrying their young in their arms like a human mom might.

Their social reticence is not absolute, fortunately, for researchers. Their natural ranges are known to overlap, and when they’re brought together they’re actually playful, and the new study reveals they’re twice as likely to play gently than roughhouse. 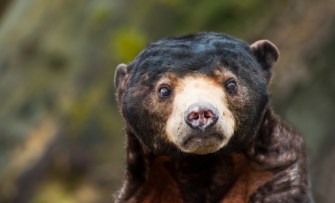 The authors of the study observed 22 unrelated, rehabilitated sun bears in the Bornean Sun Bear Conservation Centre in Malaysia. The bears’ ranged from 2 to 12 years of age. The center has three outside play pens large enough that sun bears could opt into playtime or not as they wished. There were never more than six bears in an enclosure at one time.

The sun bears were recorded in 372 play sessions for three-minute intervals during two periods: January 2015 to September 2016 and again from August to December 2017. 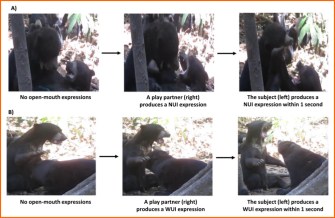 What the researchers witnessed

The researchers first analyzed approximate mimicry — imitating a companion’s mouth being open or not — and then more detailed mirroring. One of the key variables, sensibly enough, was whether or not the sun bears were facing each other, since that’s the only way they could see each others’ faces.

The study’s authors found that there was a strong correlation between bears facing each other and open-mouth expressions, allowing researchers to conclude that one sun bear’s open-mouthedness was a reaction to another’s, and not just a random occurrence. According to the study, “To our knowledge, this is the first demonstration that the production of facial expressions is sensitive to social partner’s attentional state in a bear species.”

Exact facial mimicry is rarer in the animal kingdom, as far as we know, having been documented only in humans and gorillas. Even so, sun bears in this study demonstrated this ability — they “matched the same facial variant of their social partners.” This occurred most frequently during gentle play.

The researchers propose two theories, either of which would require further study to confirm or refute: 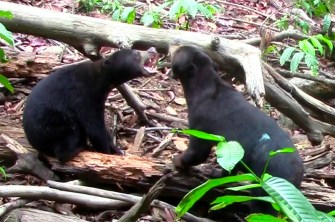 Sun bears do it

What extends the significance of this study beyond sun bears is that bears and humans are barely even cousins, suggesting the ability to imitate one another is a mammalian trait perhaps more common than we’d previously realized. Speaking with UoP News, lead author Marina Davila-Ross says, “Because sun bears appear to have facial communication of such complexity, and because they have no special evolutionary link to humans unlike monkeys are apes, nor are they domesticated animals like dogs, we are confident that this more advanced form of mimicry is present in various other species.”

It also appears to be something innate, as well. As co-author Derry Taylor notes, “It is widely believed that we only find complex forms of communication in species with complex social systems. As sun bears are a largely solitary species, our study of their facial communication questions this belief, because it shows a complex form of facial communication that until now was known only in more social species.”

Exact mimicry’s value goes well beyond being part of nightclub comic’s toolkit: “Mimicking the facial expressions of others in exact ways is one of the pillars of human communication” says Davila-Ross. “Other primates and dogs are known to mimic each other, but only great apes and humans were previously known to show such complexity in their facial mimicry.” Until now.

Sex can be a death trap even for modern toad and frog species.
Up Next
Health

The discovery could lead to improved treatments for chronic pain.