A team of Stanford researchers have identified the key rhythmic activity in the brain that triggers a mysterious and often frightening experience called dissociation in which people can feel split from their body, lives, and reality.

Dissociation is an experience commonly described as a feeling of sudden detachment from the individual’s identity and environment, almost like an out-of-body experience. This mysterious phenomena is experienced by about 2 percent to 10 percent of the population.

“This state often manifests as the perception of being on the outside looking in at the cockpit of the plane that’s your body or mind — and what you’re seeing you just don’t consider to be yourself,” explained senior author Karl Deisseroth, MD, PhD, in a Stanford Medicine news release. Deisseroth is a professor of bioengineering and of psychiatry and behavioral sciences, as well as a Howard Hughes Medical Institute investigator.

Nearly three-quarters of individuals who have experienced a traumatic event will slip into a dissociative state either during the event or in the hours or even weeks that follow, according to Deisseroth. Most of the time, the dissociative experiences end on their own within a few weeks of the trauma. But the eerie experience can become chronic, such as in cases of post-traumatic stress disorder, and extremely disruptive in daily life. The state of dissociation can also occur in epilepsy and be invoked by certain drugs.

Until now, no one has known what exactly is going on inside the brain triggering and sustaining the feeling of dissociation — and so it has been a challenge to figure out how to stop it and develop effective treatments. 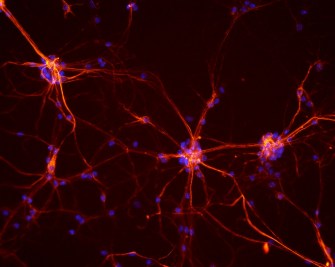 Neurons from a mouse spinal cordCredit: NICHD on Flickr

Last week, in a study published in Nature, Deisseroth and his colleagues at Stanford University uncovered a localized brain rhythm and molecule that underlies this state.

“This study has identified brain circuitry that plays a role in a well-defined subjective experience,” said Deisseroth. “Beyond its potential medical implications, it gets at the question, ‘What is the self?’ That’s a big one in law and literature, and important even for our own introspections.”

The authors’ findings implicate a specific protein existing in a particular set of cells as key to the feeling of dissociation.

The research team first used a technique called widefield calcium imaging to record brain-wide neuronal activity in lab mice. They observed and analyzed changes in those brain rhythms after the animals had been administered a range of drugs that are known to cause dissociative states: ketamine, phencyclidine (PCP), and dizocilpine (MK801). At a certain dosage of ketamine, the mice behaved in a way that suggested that they were likely experiencing dissociation. For example, when the animals were placed on an uncomfortably warm surface, they reacted to it by flicking their paws. However, they signaled that they didn’t care enough about the unpleasantness to do what they would typically do in such a situation, which is to lick their paws to cool them off. This suggested a dissociation from the surrounding environment.

The drug produced oscillations in neuronal activity in a region of the mices’ brain called the retrosplenial cortex, an area essential for various cognitive functions such as navigation and episodic memory (a unique memory of a specific event). The oscillations occurred at about 1-3 hertz (three cycles per second). The authors then examined the active cells in more detail by using two-photon imaging for higher resolution. This revealed that the oscillations were occurring only in layer 5 of the retrosplenial cortex. Next, the researchers recorded neuronal activity across other regions of the brain.

The scientists then used optogenetics, a method of manipulating living tissue with light to control neural function, to stimulate neurons in the mice’s retrosplenial cortex. When the scientists did this at a 2-hertz rhythm, they were able to cause dissociative behavior in the animals analogous to the behavior caused by ketamine without using drugs. The experiments conducted by the team displayed how a particular type of protein, an ion channel, was essential to the generation of the hertz signal that caused the dissociative behavior in mice. Scientists are hopeful that this protein could be a potential treatment target in the future.

The researchers also recorded electrical activity from brain regions in an epilepsy patient who had reported experiencing dissociation immediately before each seizure. The sensations experienced right before a seizure is called an aura. This aura for the patient was like being “outside the pilot’s chair, looking at, but not controlling, the gauges,” Deisseroth said.

The researchers recorded electric signals from the patient’s cerebral cortex and stimulated it electrically aiming to identify the origin point of the seizures. While that was happening, the patient responded to questions about how it felt. The authors found that whenever the patient was about to have a seizure, it was preceded by the dissociative aura and a particular pattern of electrical activity localized within the patient’s posteromedial cortex. That patterned activity was characterized by an oscillating signal sparked by nerve cells firing in coordination at 3 hertz. When this region of the brain was stimulated electrically, the patient experienced dissociation without having a seizure.

This study will have far-reaching implications for neuroscience and could lead to better-targeted therapies for disorders in which dissociation can be triggered, such as PTSD, borderline personality, and epilepsy.

Psychologists are finding that moral code violations can leave an enduring mark — and may require new types of therapy.
Up Next
Smart Skills

To be a great innovator, learn to embrace and thrive in uncertainty

Innovators don’t ignore risk; they are just better able to analyze it in uncertain situations.