A new Johns Hopkins Medicine study show that nitrates—a preservative used to stop the growth of bacteria as meat cures—found in foods like jerky, hot dogs, and other cured meats have been linked mania.

What is mania? Simply put, it’s a serious neuropsychiatric condition commonly identified as the “wild” part of a bipolar mood swing marked by euphoria, insomnia, hyperactivity, risk-taking behavior and detachment from reality (as opposed to the lethargy of the depression side). The study was conducted on both humans and rats and the researchers found that the rats exhibited hyperactivity, similar to the mania in humans.

Before any meat-lovers (self-included!) fly off the handle and decry the study as “fake chews” (look, the joke was right there), it’s not just some fly-by-night study done on a select group. It was conducted over 10 years with over 1,000 participants with a near-equal ratio of men to women, split between people with a history of mental illness and without. 36% of the study group were African American. Johns Hopkins reports (emphasis mine) that:

A study of their records between 2007 and 2017 showed that, unexpectedly, among people who had been hospitalized for mania, a history of eating cured meat before hospitalization were approximately 3.5 times higher than the group of people without a psychiatric disorder. Cured meats were not associated with a diagnosis of schizoaffective disorder, bipolar disorder in people not hospitalized for mania or in major depressive disorder. No other foods about which participants were queried had a significant association with any of the disorders, or with mania. 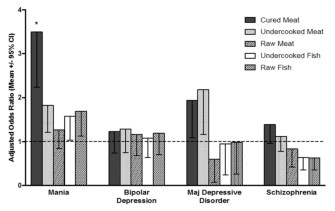 Lead author Dr. Robert Yolken M.D., said: “We looked at a number of different dietary exposures and cured meat really stood out. It wasn’t just that people with mania have an abnormal diet.”

This comes on the heels of other recent findings saying that these cured meats also cause cancer since they’re packed with carcinogens according to the World Health Organization.

Eating one stick of beef jerky isn’t likely to send you to a psychiatric ward. The study authors insist that further research is needed to sort cause and effect.

10 fascinating discoveries from the Galapagos Islands

The Galapagos Islands are among the most fascinating places on Earth. Their uniqueness has inspired science to make many important discoveries there.