There are a number of reasons the death of a pet is as hard as—or sometimes, even worse than—losing a human.

There’s also the ‘love hormone’ known as oxytocin, which is released when humans stare into each other’s eyes, or when parents look at their children. A 2015 study found that dogs and humans both experience increased oxytocin levels when they look into each others eyes.

“I’m sure if you did the study with other animals it would be the same,” says Cori Bussolari, a psychologist at the University of San Francisco, reasoned.

Wendy Packman, a psychologist at Palo Alto University, refers to the social stigma around grieving a pet as “disenfranchised grief.”

“With disenfranchised grief is there is less support, and the grief can be even worse than for a person because there are no rituals, and when people do go out and do a ritual, when they feel brave enough, they can be ostracized.” 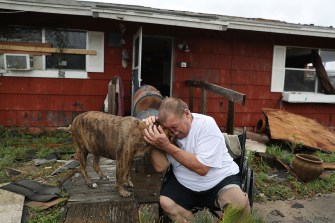 Steve Culver cries with his dog Otis as he talks about what he said was the, ‘most terrifying event in his life,’ when Hurricane Harvey blew in and destroyed most of his home (Photo by Joe Raedle/Getty Images)

How can you help?

Be a listening friend or family member, acknowledge their grief, and don’t try to minimize it or dismiss it as trivial.

Packman sums it up: “The reality is that the more we talk about grief, the more we normalize grief.”

What are the psychological effects of losing your religion?

For many, their religion is a core part of their identity, the meaning they find in life, and their social world. Changing this crucial aspect of themselves will have significant psychological consequences.