The history of art has given us an innumerable amount of stunning works throughout the years. It is no small feat to limit the contributions of the artistic sphere to just ten greatest works. But many art critics and art lovers alike can agree that there are some works so majestic and timeless that they’ve earned their place to hang like canvases in the hall of the greats. Mixed in with some of the more famous works are a few unknown paintings that have stood the test of time for their craftsmanship and beauty.

While we might not always be able to explain what art is, we often know it when we see it. These are the top 10 greatest works of art. 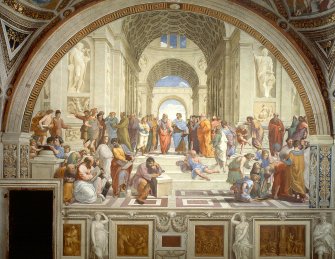 The School of Athens by Raphael

Raphael’s best-known painting is the School of Athens. This anachronistic painting brings together ancient philosophers from thousands of years apart onto a single stage. Raphael’s inspiration for the painting seems to have derived from the philosophy of Giovanni Pico della Mirandola – a contemporary who had reverence for ancient wisdom in which he studied under the Florentine Platonic academy. Cosimo de Medici was instrumental in the patronage for this work.

Historians reference St. Pete’s Cathedral which was in construction next to the wall of the painting at the Vatican. It was said that the architectural detail was incredibly reminiscent of the curved arches next door with impeccable perspective.

There is evidence that some of the philosophers have been identified as Plato, Aristotle, Socrates, Pythagoras and more.  Here is a full list with locations for reference. 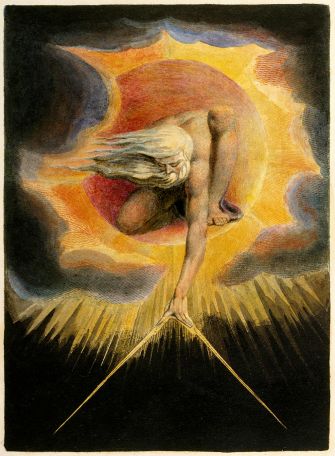 The Ancient of Days by William Blake

This watercolor etching was completed by writer, painter and visionary William Blake. There are only 13 of these pieces in existence spread worldwide at libraries and universities. Each one is unique because Blake colored them by hand.

Claimed to be inspired by a mythical vision he had when he was four, Blake stated that it was one of his favorites. In William Blake’s complex mythology, this painting represents Urizen, an embodiment of a God figure that represents reason and law. He carries with him the architect’s tools to create and manipulate the universe as he sees fit. 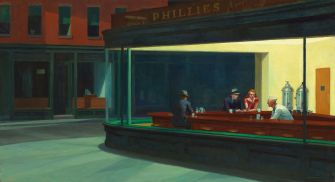 Nighthawks is a more contemporary American painting. Set in the Twentieth century, the image depicts a brief shot of a 1940s America. Nighthawk conveys an eerie feeling of isolation based in the city. If you look at the painting, you’ll see there is no door to exit out into the street. His use of different colored exterior and exteriors is what makes this piece so haunting. These mysterious aspects have led to this painting being so famous. It’s a snapshot of a unique time. 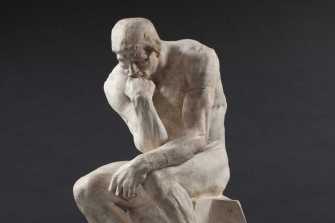 The Thinker by Rodin

Auguste Rodin originally created The Thinker to be part of a much larger work called The Gates of Hell. The statue represents Dante, author of the Divine Comedy, as he leans forward to observe the circles of hell and meditate on his work. It was inspired by Michelangelo’s seated portrait of Lorenzo de Medici.

The actual size of the sculpture is huge. At nearly 20 ft high, the body towers over anything Rodin had ever created. There are casts spread throughout the world of this sculpture. Some are in the Rodin Gardens in Paris, all the way down to Melbourne in Australia to Buenos Aires in Argentina. 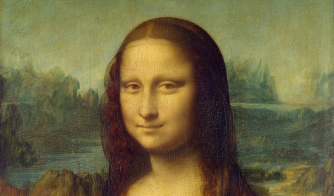 Arguably one of the most iconic paintings in the world, Leonardo da Vinci’s masterpiece is also one of the most recognized as well. It is known as La Gioconda and it is believed to have been based on the wife of a wealthy Florentine merchant. Many have speculated about this haunting smile, as well as other inspirations for the model.

It was thought that the painting was created originally from a time period between 1503 to 1506, but perhaps even extended out to ten years or more.

There is a rich history about the ownership of the Mona Lisa. The over 500-year-old painting resides in the Louvre, where millions go to visit her every year and stare at that mysterious face. 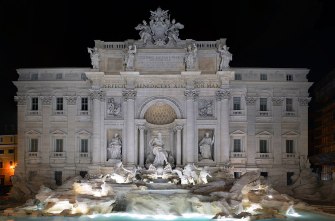 This famed fountain in Rome, Italy is one of the largest of its kind and its importance is known worldwide. Towering 86ft high, it boasts a Baroque style crafted in the 15th century. Right in the middle of this goliath stands Neptune. Don’t confuse this fountain with its replica in Las Vegas. It’s mythical qualities supersede anything that sought to copy it.A master of the ocean, Neptune is led by his chariot and accomplices to both of his sides. The interpretation of the differing temperaments of the animals is symbolic of the serenity and pure spontaneity of the sea. 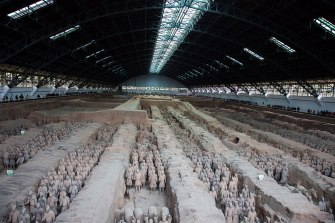 The tomb site that hosts the Terracotta statues sat dormant for years. Archaeologists discovered that the site spans some 38 square miles and that Qin’s mausoleum is 200 times larger than Egypt’s Valley of the Kings. The inside is filled with the marvelously carved statue army with pearls dotting the ceilings and rooms filled with opulent treasures and sculptures.

These figures are a UNESCO World Heritage site. Estimates go that the pits that hold these statues contained at one point more than 8,000 soldiers, 130 chariots, 520 horses and 150 cavalry horses. Many of these figures once held real weapons, some that have been preserved were actually coated in chrome plating – something that wouldn’t be invented for thousands of years.

Some scholars believe that the ancient Greeks might have actually helped sculpt this expansive masterpiece. 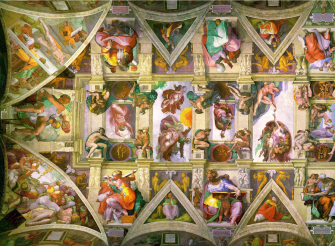 The ceiling of the Sistine Chapel

Another entry by Michelangelo, the entirety of the Sistine Chapel ceiling, projects to a massive domed height, where its sprawl only adds to the sheer magnitude of this work. Each section depicts a different scene from the old testament.

The most famous of these frescoes is The Creation of Adam. God floats draped in a cloud of angels with an outstretched hand towards Adam. It’s one of the most famous pictures in art history. Michelangelo completed the Sistine Chapel in 1512. 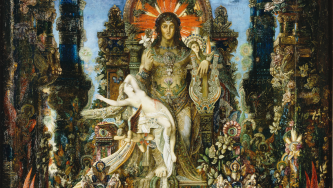 Jupiter and Semele by Gustave Moreau

Moreau’s work from the French Symbolist and decadent era depicts a mystical world that draws from the Jupiter story – the Roman equivalent of Zeus. It hosts a number of mythological gods and creatures afoot in the court of Jupiter. Moreau was inspired by the Italian Renaissance. He made over 8,000 painting and drawings throughout his life and influenced the next generation of Symbolist artists.

The artist had this to say about Jupiter Et Semele:

“Semele, penetrated by the divine effluence, regenerated and purified by this consecration, dies struck by lightning and with her dies the genius of terrestrial love, the genius with the goat hooves.”

Pablo Picasso’s Guernica is a distinct piece in the cubist style. It was one of the focal points of artistic merit at the Paris World Fair in 1937. It is unique as it was a political protest piece that depicted a Northern Spanish town, Guernica being attacked by Hitler’s forces. It was a sanctioned attack by the Spanish government.

The figures depict wounded soldiers, distorted faces of dead civilians and a bull in the midst of the chaos. The work was taken all over the world to raise awareness of the war. This helped contribute to its everlasting fame. 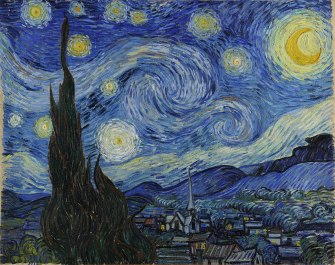 Vincent Van Gogh’s painting is a standard in art classes everywhere. The Starry Night is a nocturnal and abstract expression for what Van Gogh imagined swirling around the sky in the night. It was painted in 1889 and was inspired from the view outside his window at the Saint Paul de Mausole asylum. He was considered an unsuccessful artist during his lifetime, but his expressionism and avant-garde genius gained him prominence posthumously.

Here’s how Mueller could file criminal charges against President Trump

The Justice Department has long held the view that a sitting president cannot be indicted. However there is a fail-safe mechanism in the law reserved for special circumstances.