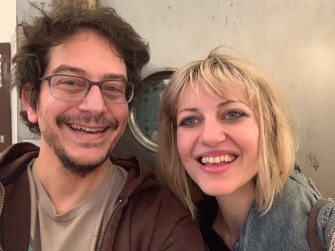 Among other things, music can be medicine. Like a vaccine, it sometimes works by giving your body a little taste of the disease. Other times, of course, you just wanna dance, and James Brown might be just what you need. But the medicine songs I’m talking about are the ones that break your heart open no matter many times you hear them. And you want them to—because that’s what it feels like to be alive.

Nobody knows this better than my guest today, singer-songwriter Anaïs Mitchell. Like the centuries of blues and folk songs that echo through it, transubstantiated by her voice and guitar into something almost too beautiful to bear, her music is powerful medicine.

Anaïs wrote all the songs, lyrics and the book of the new (14x Tony-nominated!) Broadway musical, HADESTOWN, directed by Rachel Chavkin. It makes new again the ancient story of the singer-songwriter Orpheus and his lover Eurydice, who he follows all the way to hell, and leads most of the way back.

Ask Ethan: Where Does A Proton’s Mass Come From?

The whole should equal the sum of its parts, but doesn’t. Here’s why.The whole is equal to the sum of its constituent parts. That’s how everything works, from galaxies to planets […]