In what some are labeling a “stunning blow,” the case that Kaepernick has brought against the NFL, known as a “grievance” under the collective bargaining agreement that the players’ union has with the NFL, will proceed. In that grievance, he has accused the NFL of colluding to keep him unemployed during arguably what would have the prime of his career. After leading the San Francisco 49ers to two NFC championships and one Super Bowl appearance, he left the team on March 2nd, 2017 and has not received an offer since — and in the meantime, more than 50 other quarterbacks have. That very same last season he played, his teammates voted to give him the Len Eshmont Award for leadership and courage. 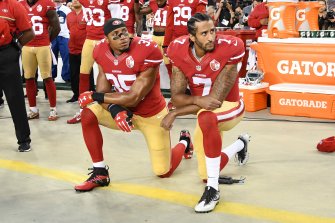 The controversy about Kaepernick’s taking a knee during the national anthem — an action suggested by a veteran and fellow player who befriended him — began as an effort to draw attention to the fact that unarmed African Americans were being killed by police due to racial bias.

Indeed, 49ers cornerback Richard Sherman stated in late 2017 that he knows why Kaepernick is still unemployed.

The case was filed originally in October 2017. In a hearing in front of Arbitrator Stephen Burbank this week, he ruled against the NFL’s attempt to get a summary judgment and dismissal of the case. Kaepernick’s lawyer, Mark Garages, Tweeted out the letter he received as a notice:

The case will go to a full hearing before the end of the year, at which time the same judge will intensely question and cross-examine NFL owners, coaches, and executives before making a decision on the validity of Kaepernick’s claims against the NFL.

If it’s decided in his favor, he is seeking damages equal to what he would have earned if he were still playing in the league.

What does it mean that John McCain is ‘lying in state’ in the U.S. Capitol?

Senator John Sidney McCain III, who died Saturday, Aug. 25, 2018 at the age of 81, is lying in state in the Rotunda of the United States Capitol.