The dive followed Facebook’s release of its second-quarter earnings report, which didn’t live up to analysts’ estimates, despite showing 42 percent revenue growth compared to the same period last year. It was the company’s biggest stock market drop ever.

On a phone with analysts on Wednesday, Facebook Chief Financial Officer David Wehner said that the company would continue to see declines in sales growth throughout the year, news that prompted shares to drop 7 percent in after-hours trading, and about 20 percent by Thursday morning. 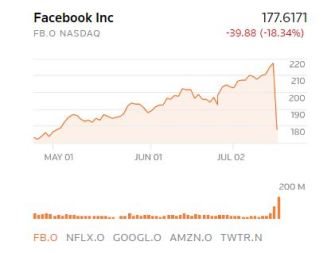 Shares of other tech stocks, like Twitter and Snap, took a relatively small hit after the news.

This week’s earnings report was the first since Facebook’s Cambridge Analytica scandal, an event that could explain why Facebook is currently seeing its slowest growth rate ever, with 2.23 billion people logging in at least once a month in June, below the expected 2.25 billion.

“The stock has had an epic run since March, so short-term-minded investors were ripe to sell off Facebook once a hint of a less than perfect quarter turned into a reality. Less time on Facebook means slower top-line revenue that had driven the stock to recurring all-time highs.”

In the second quarter, daily usage remained mostly flat at 185 million daily users in the U.S. and Canada. However, the company saw a decline in daily users in Europe, which is hitting the company with new data protection regulations that can be expected to have a “modest impact” on growth, Facebook officials said.

“We did see a decline in monthly actives in Europe, down by about 1 million,” Facebook CEO Mark Zuckerberg said on the call.

Nevertheless, Facebook’s daily active users increased by 11 percent on a year-over-year basis, and the company was sure to tout the fact that some 2.5 billion people used at least one of Facebook’s apps, including Instagram and WhatsApp, in June.

“We believe this number better reflects the size of our community,” Wehner said.

From politics to culture, we blame “tribalism” for humanity’s problems. This explanation is entirely wrong.
Up Next
Career Development