Athletes and spectators alike are ramping up for the 2018 Winter Games, this year held in PyeongChang, South Korea. Beginning February 9, these Games will be the second time the Republic of Korea will have hosted the Olympics. The first was in 1988, a sort of coming out party, where Seoul showcased how much the country had developed on the world stage.

For countries who already have a solid brand and don’t need a debutante ball costing billions of dollars, is the Olympics a good investment? For the PyeongChang Games, South Korea has built a $109 million stadium which will be used only four times: for the opening and closing ceremonies of the Olympics and Paralympics. Afterward, it plans to tear it down, rather than let it become a “white elephant”—the colloquial term for a stadium that’s fallen into disuse and disrepair.

Today, hosting the Olympics can run into the billions of dollars. The average cost is $4.5 billion. And 90% of those for which we have records go over budget. Harvard Business School emeritus professor Stephen Greyser recently spoke at the Wharton School about this topic. His conclusion was, it may boost a country’s brand, but it’s almost always a loss economically.

Lots of research backs up the idea that hosting the Olympics is a bust. A 2015 study published in the journal Eurasian Geography and Economics, found that the Sochi Olympics, the second most expensive on record, cost $55 billion and showed little economic benefit to Russia. Note that Sochi’s price eventually cost 4.5 times the original estimate. Considering recent news stories about Russian interference in elections and its doping scandal, hosting the Olympics has done little to boost the country’s image long-term.

A 2015 study published in World Economics found that “except under special circumstances, the scholarly evidence suggests that hosting either event (the Olympics or the World Cup) is no economic bargain for the host city or country. Short-run costs for venue construction and operations invariably exceed Games-related revenues by billions of dollars and long-term gains are elusive.”

A recent paper out of Oxford looks at the 2016 Rio Olympics, along with cost-overrun data from 19 other cities who have hosted the world’s most indispensable sporting event. Just the bidding process itself is expensive. Besides that, researchers looked at the construction costs for the Olympic villages (which house the world’s athletes during the competitions), along with costs for administration, transportation, payroll, security, and more. Accounted for inflation and currency valuation, researchers found that the average cost overrun was 156% of the original estimate. 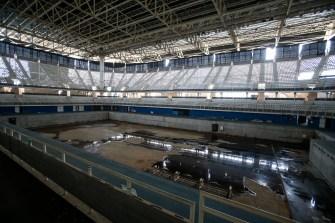 Hoping to spur economic development outside of Seoul, one benefit South Korea stands to gain by hosting the Olympics is a boost to its winter tourism. But PyeongChang is a rural region in South Korea, located several hours’ drive from the capital city. The area gets few tourists, even domestic ones. Most visitors come to hike in the verdant hills when temperatures are warmer; a stalwart few come to ski, or to visit the nearby Buddhist temples (some of which date back to the 7th century).

At 2,300 feet above sea level, PyeongChang does have plenty of great areas for winter sports and lots of seasonal snow. President of South Korea’s Olympic organizing committee Lee Hee-beom told USA Today, “We want to make these the best Winter Games ever and showcase Korea to the world as a global leader in sports and as the new hub for winter sports in Asia.”

Unfortunately, there is little evidence that hosting the games increases tourism. For cities that already draw tourists, Olympic-bound spectators often replace those who would normally visit. The latter stay away due to the crowds. The Barcelona Games of 1992 is one possible exception. Its tourism did increase there after the games showcased the city. So far, however, PyeongChang has had lackluster ticket sales, as spectators worry about enduring the cold (the Olympic stadium has no roof) and the lack of landmarks and other tourist destinations in the area. 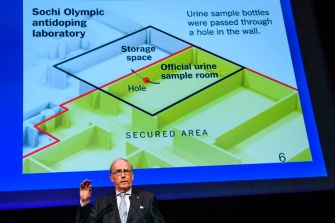 Even when it comes to branding, hosting the Olympics doesn’t necessarily equate to a boost. Speaking at Wharton, Prof. Greyser pointed out, that even though the 2008 Beijing games showcased China as a burgeoning world power, it also ignited activism around the world challenging China’s human rights record, its policies toward Tibet, its arbitrary imprisonment of journalists, and more. The 24-7 news cycle today throws a spotlight on every aspect, good and bad, projecting worldwide what’s going on inside a host country and how well it accommodates the games.

It was hosting the 2014 Sochi Olympics in fact that came to reveal the Russian doping scandal, which included up to 1,000 athletes in 30 sports. The athletes were passing clean urine through a hole in the wall in order to clear drug screening. At Barcelona in 1992, volunteers waited in line for hours, only to find organizers were out of uniforms. The 2004 Athens schedule was so delayed, people said the Chinese had already made better progress for the 2008 games. While coverage of the Rio games revealed a number of empty seats, which hurt its image.

There are indications that hosting the Olympic Games also increases inequality in a society and can lead to incidents of injustice, something that’s particularly poignant today when the gulf between rich and poor in nations around the world is exceedingly wide and growing. Generally, landowners, developers, construction firms, luxury hotels, fancy restaurants, and giant retailers benefit financially when a city hosts the Games while the citizenry is on the hook for whatever financial losses are incurred. For this reason, many economic progressives refer to the Olympics as a wealth transfer scheme; it takes tax money from the poor and middle class and funnels it to the rich.

As for injustice, during the Rio games, 20,000 poor, mostly black residents were displaced from their neighborhoods to make room for various redevelopment projects. That’s not to mention the waste and corruption that often comes with Olympic-related projects, many of which turn into white elephants or are torn down.

Because of this, activists in Budapest and Boston shut down their cities’ bids for the 2024 Summer Games. Los Angeles is expected to host the 2028 Summer Olympics, which is why a small but vocal group called NOlympics LA (organized by the Democratic Socialists of America’s-Los Angeles chapter) is running a campaign to block it.

Facebook co-founder: Every middle-class worker should get a $6,000 raise

It’s no secret that American income inequality is at its worst point since the gilded age. So how do we stop this rampant inequality?
▸
6 min
—
with
Chris Hughes
The Present

“Sports is war minus the shooting,” said George Orwell. So far, however, a thawing of tensions between North Korea and South Korea has been the big political story of the 2018 Olympic Games.
Technology & Innovation

The Land of Opportunity or Inequality? What the ‘Great Gatsby Curve’ Graph Shows

One graph claims to show the inverting relationship between inequality and opportunity. The Great Gatsby Curve sheds light on one of the key issues of our time.
Up Next
The Present

What Trump meant at Davos: “America first does not mean America alone.”

President Donald Trump veered away from his typical protectionist rhetoric at the World Economic Forum in his remarks on the benefits of global cooperation.