While they’ve been incredibly successful, the New England Patriots also accumulated their share of detractors and let’s face it – haters. Many people simply do not believe in the Patriots’ winning ways and rather opt for conspiracy theories that basically suggest the Tom Brady-led Pats cheated their way to the top of the NFL, which runs a league-wide operation to favor them.

Did the Pats get help from a ref to win the AFC championship game against Jacksonville Jaguars? After the Patriots won a thrilling, come-from-behind victory to clip Jaguars 24-20, a ref came over to seemingly congratulate the Pats’ quarterback Tom Brady. Why would he do so if he didn’t somehow want the Patriots to win? Or so goes the conspiracy.

Here’s a still of that encounter: 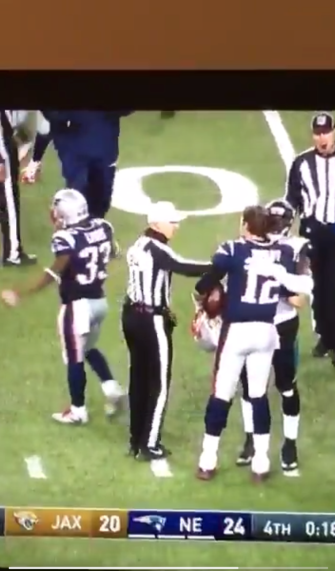 Further evidence of favors thrown the way of the Patriots during that game – according to NFL Research, they got just one penalty for ten yards. That’s the fewest penalties “called on one team in a playoff game since the 2011 AFC Championship,” wrote the NFL. The Jaguars, in their turn, got penalized 6 times during the game for 98 yards in total. 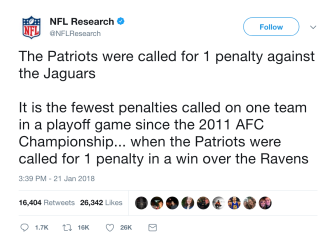 Who was that last team to get just one penalty? You guessed it – the Patriots were penalized just once when winning over the Ravens in 2011.

Now, as further evidence, is this ref laughing along with the Pats?

Of course, for all the commentators who want to believe the Pats are somehow rigging everything against all the other teams, there are those like the Patriots’ beat writer Doug Keyd, who pointedly writes:“only morons believe in officiating conspiracies.” He proposes that the infamous ref was there to separate the Jaguars safety Tashaun Gipson from the Patriots. And he smiled out of courtesy to a pleading Patriots player, not because he was paid off.

Such explanations notwithstanding, the accusations against the Patriots have some grounding in the past. Who can forget Deflategate, the scandal that the Pats supposedly under-inflated footballs on purpose in their victory against the Indianapolis Colts in the AFC Championship game of the 2014-15 NFL playoffs. If you recall, the controversy resulted in a four-game suspension for Tom Brady, while the team lost two draft picks and a $1 million to a fine. 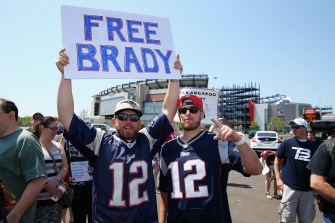 Ryan Desilets and Jon Harmon both from Milford, Massachusetts, show support for New England Patriots quarterback Tom Brady at the ‘Free Tom Brady’ rally at Gillette Stadium on May 24, 2015 in Foxboro, Massachusetts. The rally was held in protest of Brady’s four game suspension for his role in the ‘deflategate‘ scandal. (Photo by Maddie Meyer/Getty Images)

An even earlier incident, from 2007, dubbed Spygate, probably provided the initial fodder for conspiracy theorists. During that season, the Patriots were caught videotaping the signals of the New York Jets’ defensive coaches’ during one game. The league fined the Pats’  head coach Bill Belichick $500,000 and the team lost a 2008 first-round pick.

Recently, allegations similar to Spygate were leveled against New England by the former Philadelphia Eagles linebackers coach Steve Spagnuolo, who claimed the Pats cheated during the 2005 Super Bowl that also pitted them against the Eagles. Spagnuolo remembered his teammates discussing how the Patriots seemed to know all their signals.

Certainly, how much you want to believe the conspiratorial powers of the New England Patriots depends on your level of dislike for the team. It’s also entirely possible their amazing success in the modern football era is fueled simply by talent, discipline, and one of the best quarterbacks of all time.

Or they are cheating, having the whole NFL in their pocket.

On New Year’s Eve 1899, the captain of this Pacific steamliner sailed into history. Or did he?
Up Next
The Future

Why hiring the ‘best’ people produces the least creative results

Complex problems undermine the very principle of meritocracy: the idea that the ‘best person’ should be hired. There is no best person.