New York City is home to about 13,600 licensed taxicab drivers, more than any other city in the country. In recent years, however, the city has issued far more licenses—about 80,000—to Uber and Lyft drivers, and that number is growing quickly, by about 1,700 drivers each month.

It’s an existential threat for New York City cabbies. The for-hire ride market is oversaturated, wages are dropping and the value of taxi medallions, which are required to drive a cab in the city, have dropped in value from $1 million to less than $200,000, according to the Associated Press.

Most sobering are the suicides. In the past year, six New York cab drivers have killed themselves, including veteran taxi driver Doug Schifter, who published a 1,700-word Facebook post venting outrage and indignation at politicians whom he felt had willingly destroyed his industry before taking his own life.

But this week New York City passed legislation that will cap new licenses for drivers with companies like Uber and Lyft in an effort to stop the erosion of the taxi industry and to study the effects the ride-sharing industry has on the city’s economy and traffic congestion.

The bills, which are the first attempts by a U.S. city to limit the growth of the ride-sharing industry, will temporarily halt the issuing of new licenses for ride-sharing drivers, place a one-year cap on new licenses, and establish a minimum wage for drivers.

“Our city is directly confronting a crisis that is driving working New Yorkers into poverty and our streets into gridlock. The unchecked growth of app-based for-hire vehicle companies has demanded action—and now we have it,” New York Mayor Bill de Blasio said on Twitter.

“More than 100,000 workers and their families will see an immediate benefit from this legislation. And this action will stop the influx of cars contributing to the congestion grinding our streets to a halt.”

In 2015, de Blasio, supported by the city’s Taxi and Limousine Commission, tried to place a limit on Uber cars in the city.

“The onslaught of vehicles is so tremendous that it seems actually irresponsible not to legislate in some way,” a member of the commission said at the time. 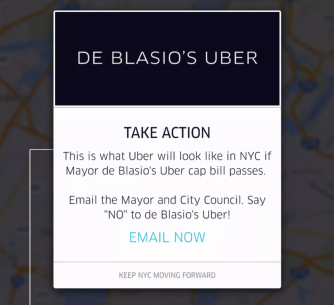 But those efforts failed, thanks largely to a PR campaign from Uber that had celebrities tweeting out against the bills, and which argued that the measures would kill jobs and make it harder for people in the outer boroughs, who don’t have easy access to public transit, to get rides into the city. Uber even trolled the New York City mayor by briefly adding a “DE BLASIO” feature to its app.

Supporters of the new legislation hope it will alleviate the city’s traffic congestion and serve as a tourniquet for a century-old industry that’s been thrashed by Silicon Valley.

Still, some are questioning how the cap will affect black New Yorkers.

“They’re talking about putting a cap on Uber, do you know how difficult it is for black people to get a yellow cab in New York City?” Rev. Al Sharpton wrote on Twitter.

The new bills came with exceptions, including exemptions for wheelchair-accessible ride-sharing cars and areas where “there is a need in a particular geographic area and there isn’t a substantial effect on congestion,” the city council said.

What’s in all that space between the stars? Space gloop!

The vast emptiness of space isn’t really so empty: It’s filled with space goop made of greasy carbon molecules.