At 7:15 PM on April 15th, the worst prison riot in 25 years took place at Lee Correctional Institution in South Carolina. Arguing over territory and money, the combatants fought each other using improvised knives, resulting in seven inmates dead and 22 more wounded. Correction officers and EMTs failed to intervene for seven hours until the melee had calmed down by 2:15 AM the next morning.

Prisons in South Carolina and the U.S. as a whole are reaching a tipping point. In South Carolina especially, the number of inmates killed in 2017 was double the number killed in 2016 and quadruple the number in 2015. The expenses of running a prison (roughly $33,000 per inmate) make it difficult to offer the wages necessary to attract sufficient staff, resulting in the kind of overwhelmed paralysis that prevented corrections officers from intervening at Lee Correctional for seven hours. Many inmates see this uptick in violence as a direct result of actions made by the state since the 1990s, including reducing prisoners’ pay, opportunities for education, access to the outdoors, and other restrictions.

Soon after the riot on April 15th, Jailhouse Lawyers Speak and other prisoners’ rights groups began planning a strike to take place between August 21st and September 9th, which marks the anniversary of the famous Attica prison riots. The strikers have issued a list of ten demands, among which are topics dealing with sentencing reform, policing reform, and increasing the wages paid (or not paid) to working prisoners. 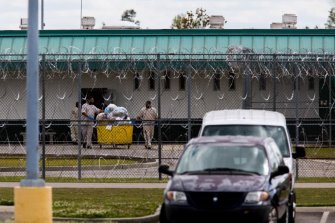 The nature of the strike

As methods of protest, the strike organizers recommend that prisoners refuse to work, refuse food, or refuse to purchase items from jail commissaries until at least some of the strikers’ ten demands are met. Among these, the strikers demand that unfair laws instituted in the 80s and 90s be rescinded, like the Truth in Sentencing Act, which prevents prisoners from being eligible for parole until 85% of their sentence had been served, and the Prison Litigation Reform Act, which made it more difficult for prisoners to sue prisons, and therefore more difficult to hold prisons accountable for constitutional violations.

Perhaps the most important item on their list, however, was that incarcerated workers earn a decent wage. Prisons rely on the labor of prisoners in order to function, and a staggering number of corporations outsource their work to prisons, including Walmart, AT&T, Starbucks, Victoria’s Secret, and many others. According to the Marshall Project, the average pay for a prisoner in a state facility is 20 cents an hour, and in Texas, Georgia, and Arkansas, prisoners work for no pay at all. In California, prisoners are volunteering to fight the wildfires in that state for the comparatively princely sum of a dollar an hour and two dollars a day.

The Civil War may have been fought to end slavery, but in effect, it just shoved it under the rug. When the thirteenth constitutional amendment was made after the war, it forbade slavery and involuntary servitude under all circumstances except as a punishment for a crime. The semantics of whether prison labor is slavery isn’t ambiguous here: it’s baked into the constitution. Although the U.S. only represents 5% of the world population, we hold 22% of the world’s prison population, which strongly suggests that the incentives of cheap labor have influenced how our judicial system functions.

Additional demands by the prisoners focus on regaining access to education programs and Pell grants. The strikers argue that when these programs were rescinded in the 90s, their chances at becoming reformed, productive members of society again plummeted. They also demand (although this is unlikely to be met) that felons regain the ability to vote: so doing might prevent heavy-handed legislation like the Truth in Sentencing Act from passing in the future. 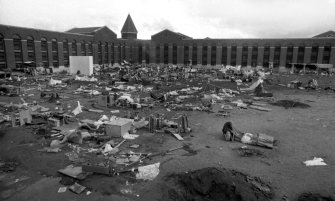 The strike is scheduled to end on September 9th, the anniversary of the Attica riots. Pictured above is the aftermath of said riots (Photo by Dan Farrell/NY Daily News Archive via Getty Images)

In 2016, the largest prison strike in U.S. history took place. It involved over 24,000 inmates at prisons in at least 12 states and focused again on the unfairness of prison labor and its poor wages. Unfortunately, little resulted from the strike, likely due to the relatively minimal media coverage it received.

The current strike has so far received little media coverage as well. The lack of available information out there makes it difficult to estimate the scope of the current strike, but much of this is due to the secrecy of prisons, which understandably do not publicize whether they have any prisoners striking or not.

Although the scope of the strike isn’t clear yet, the strike organizers claimed that they anticipated inmate demonstrations in as many as 17 states. The strike is slated to end on September 9th, the anniversary of the Attica prison riots. Until then, the size and success of the strike is anybody’s guess.

The buildings of the future will keep rearranging themselves

The buildings of the future will be fluid, impermanent, and in constant transformation. But will human nature catch up?