In the wake of the first year of the new administration and its policies that are perceived as anti-science, actual scientists from many disciplines are throwing their hats—and their lab coats—into the ring.

Here are just five to be aware of, but there are at last 60 running for federal positions and thousands for state offices. Many of them are seeking guidance and training in just how to accomplish that from an organization named 314Action, whose splash page states:

“We are committed to electing more STEM candidates to office, advocating for evidence-based policy solutions to issues like climate change, and fighting the Trump administration attacks on science. If you want to help bring science, fact, an reason back to government, join us today.”

1) Elaine DiMasi is a physicist running in the first congressional district of New York. Previously, she deciphered the structures of biological materials at Brookhaven National Laboratory. She has already learned that “Politics is about showing up. I would go into a room of influential people, and the first three times I showed up, they didn’t care. But on the fourth time, they’d say, ‘Oh, good—Elaine’s here.’ A scientist might well wonder, ‘What did I do differently?’ I simply offered myself.”

2) In Houston’s 7th congressional district, clinical oncologist Jason Westin has a chance to win in a district that currently has a Republican in office, John Culbertson. Culbertson heads a House subcommittee that sets the budget for science agencies like NASA and the National Science Foundation, so it’s rather ironic that an actual scientist is seeking to win against him.”My first commercial describes how I will stand up to Trump and the Republican Congress against their attacks on science. When I’m in Congress I’ll use facts and science to fight back for us.” 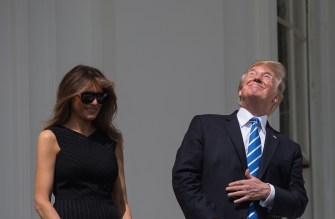 US President Donald Trump and First Lady Melania Trump look up at the partial solar eclipse from the balcony of the White House in Washington, DC, on August 21, 2017. (NICHOLAS KAMM/AFP/Getty Images)

3) Moving from scientist to fund-raising politician is not an easy transition, but one who has mastered that is 20-year army veteran Joseph Kosper, an entrepreneur who has an engineering degree from the West Point Military Academy in New York. He’s running in the 21st congressional district in Texas, and he’s raised nearly $700,000 to get there. He would be replacing Rep. Lamar Smith, retiring later this year.

4) Molly Sheehan is a bioengineering postdoctoral researcher at the University of Pennsylvania. She’s running in the 7th congressional district of PA, near suburban Philadelphia, and she understands the fundraising challenges. “Most academics don’t make a lot of money …Academic scientists think $100 is a big deal.” 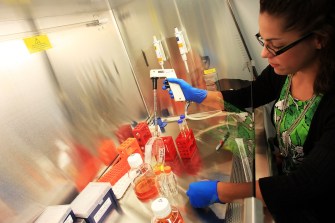 Of course, one early successful primary candidate for president in the 2016 election was none other than Bernie Sanders, who raised every dollar from small donations, and avoided Political Action Committees and large mega-donors who ultimately were offering dollars for influence, so it’s doable.

5) This is something always on the mind of Phil Janowicz, a former chemistry professor at California State University in Fullerton, CA. In his bid to win the Democratic party nomination for California’s 39th congressional district, he spends a lot of time thinking and planning what it will take, and raising money every day to get there. So far, he’s at about $350,000.

Much like the youth in Florida who are marching to force politicians to keep them safe at school, this wave could be the beginning of something much bigger on the political scene in the United States.

Why civilians do not need to own guns like the AR-15.