A United Nations panel said on Monday that senior Myanmar military officials should be tried in international court for genocide against Rohingya Muslims, among other crimes.

The panel’s damning charges are detailed in a report it compiled after conducting a year-long investigation into a military campaign led by Myanmar’s Buddhist-majority security forces against Rohingya Muslims and other ethnic minorities.

The U.N. investigators were denied access to Myanmar by government officials, so they based their report on 875 interviews with people who had fled the country, records from neighboring countries, satellite imagery and other sources.

“Only verified and corroborated information was relied upon,” the report said.

The investigators found evidence that the violence committed by Myanmar security forces “undoubtedly amounted to the gravest crimes under international law” in Rakhine, and also in the states of Kachin and Shan. 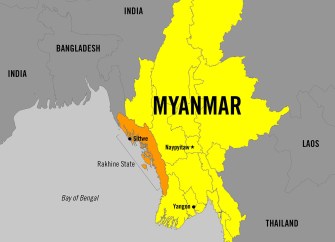 Myanmar officials have repeatedly claimed its military actions against the Rohingya were responses to attacks by Rohingya militants.

“As we did not accept the idea of a fact-finding mission from the beginning, we reject their report,” Myanmar’s Permanent Representative to the U.N., U Hau Do Suan, told BBC Burmese. “The human rights abuses are one-sided accusations against us. This is designed at putting pressure on us by the international organizations. Their report is based on one-sided information from the people who fled to Bangladesh and the opposition groups.”

The report does mention attacks on government forces by one such group, the Arakan Rohingya Salvation Army. However, it says that “military necessity would never justify killing indiscriminately, gang-raping women, assaulting children and burning entire villages.” 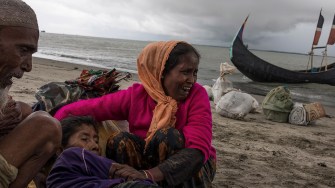 September 2017: Rohingya refugees comfort an elderly woman after the wooden boat they were traveling on from Myanmar crashed into the shore and tipped everyone out. Recent reports suggest that around 290,000 Rohingya have now fled Myanmar after violence erupted in Rakhine state, and 10,000 have been killed. (Photo by Dan Kitwood/Getty Images)

The Rohingya have faced persecution in Myanmar for decades, but tensions escalated in 2016 when violent clashes broke out on the Myanmar-Bangladesh border. Since, Myanmar has been accused by governments and human rights organizations of ethnic cleansing and crimes against humanity.

The U.N. report focuses on a specific campaign, most of which was perpetrated in Myanmar’s contentious Rakhine State, which investigators said has killed an estimated 10,000 Rohingya. The panel said that’s likely a conservative estimate.

The investigators said Senior Gen. Min Aung Hlaing, the commander in chief of Myanmar’s army, as well as five other high-ranking officials, should face charges.

Facebook, which is the most widely used social media platform in Myanmar, responded to the U.N. report by swiftly removing pages and accounts associated to Myanmar officials, in an attempt to stop the spread of “hate and misinformation.”

“Today, we are taking more action in Myanmar, removing a total of 18 Facebook accounts, one Instagram account and 52 Facebook Pages, followed by almost 12 million people,” Facebook wrote in a blog post. “During a recent investigation, we discovered that they used seemingly independent news and opinion Pages to covertly push the messages of the Myanmar military. This type of behavior is banned on Facebook because we want people to be able to trust the connections they make.”

The blog post includes a screenshot of a Facebook post from Gen. Min Aung Hlaing that refers to the Rohingya as Bengalis and insists that “Rohingya” is a fabricated word, which Myanmar citizens “do not at all accept.”

Facebook’s move marks the first time the company has issued such a far-reaching ban on a country’s politicians or military leaders.

A medical entomologist points to metabolism, body odor, and mindset.
Up Next
Surprising Science

We live in a zombie galaxy that died and came back to life, claims new study

A Japanese astronomer shows that the Milky Way galaxy was formed in two stages, “dying” in between.