Named with an acronym for the Amazon head and wealthiest person in the world Jeff Bezos, The Stop Bad Employers by Zeroing Out Subsidies (BEZOS) Act was just introduced in Congress by U.S. Senator Bernie Sanders, and it aims to prevent companies like Amazon and Walmart from paying such low wages and benefits that employees need to subsist on welfare and Medicaid to survive—while the owners and “leaders” of those very same companies become wealthier by the second. (Literally by the second: Bezos makes more money every minute than Amazon itself states its average wage-earners make per year in the United States.) 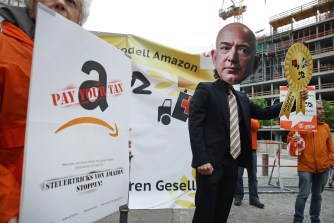 An activist dressed as Amazon CEO Jeff Bezos joins a protest gathering outside the Axel Springer building on April 24, 2018, in Berlin, Germany. The workers claim Amazon pays too little and offers too few benefits (Photo by Sean Gallup/Getty Images).

Functionally, it’s pretty simple: If a company, such as Amazon, pays such low wages that its employees depend on public benefits such as welfare and public housing to survive, then that company must pay taxes that equal the public benefits—offsetting them, if you will.

The amount saved in the unlikely event that this passes Congress? An estimated $150 billion. Per year.

“We do not believe that taxpayers should have to expend huge sums of money subsidizing profitable corporations owned by some of the wealthiest people in this country. That’s what a rigged economy is about,” said Sanders, introducing the bill alongside California Rep. Ro Khanna (D). 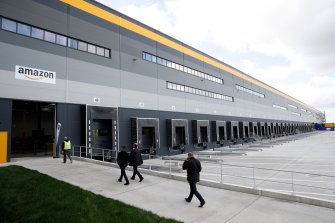 An exterior view of the Amazon factory in Boves, northern France, on October 3, 2017 (YOAN VALAT/AFP/Getty Images).

But these aren’t the only employers the bill targets; Burger King, McDonald’s, and American Airlines also were recipients of the wrath of Sanders when the bill was introduced Wednesday. Included in the press about the bill was a link to a page on the Bernie Sanders website that encourages Amazon workers (and former workers) to sound off about their experiences.

For its part, Amazon contested that what Senator Sanders’s statement was fact with a blog post asserting that everything’s fine with Amazon workers. There are some fundamental differences in facts between the two—for example, Sanders states that average Amazon workers earn $28,000 per year, when Amazon itself says that’s across the world and U.S. Amazon employees make more like $34,000.

Still… that’s not much of a feather in the cap, given that $34,000 is pretty much poverty wages in many U.S. cities, even for a single adult. Add kids to the equation, and it’s definitely a poverty wage.

A medical entomologist points to metabolism, body odor, and mindset.
Up Next
Strange Maps

Does this world map finally tell the truth (or just lie a little less)?

Three scientists have produced a map of the world which accurately reflects the size of all the continents. They’re calling the Equal Earth Projection.